Okay, just a quick note. Sihanoukville (pronounced Sih-ha-new-k-ville) is a south western city in Cambodia that borders the gulf of Thailand. We didn’t stay right in the city as its a big party central, we stayed on a more relaxed beach about 10 min away called Otres Beach.

Koh Rong & Koh Rong Sanloem are two islands about 30 min from Sihanoukville in the gulf of Thailand. Koh Rong is the main island and is known to be a backpacker destination for partiers and adventurers. Koh Rong Sanloem (from our understanding means little Koh Rong) is an island South of Koh Rong that is less developed than Koh Rong and more for the laid back traveler just wanting a Wifi free, undeveloped, relaxing beach experience.

Now that you know the geography, on to the story!

First off, we stayed 3 nights in Sihanoukville – on Otres Beach. It was expensive to stay here (keep in mind expensive is like $25 CAD per night). But, on the plus side, it was basically just a strip of beach with bars down it that had beach loungers and decently priced beers. We found a bar called “Happiness” and we sat there until 6 pm (when their happy hour ended) and drank $0.50 beer all day. We paid our bill at the end of the day and it ended being about $20 USD and we’d both eaten breakfast, and lunch there and drank beers all day. Can’t Complain! 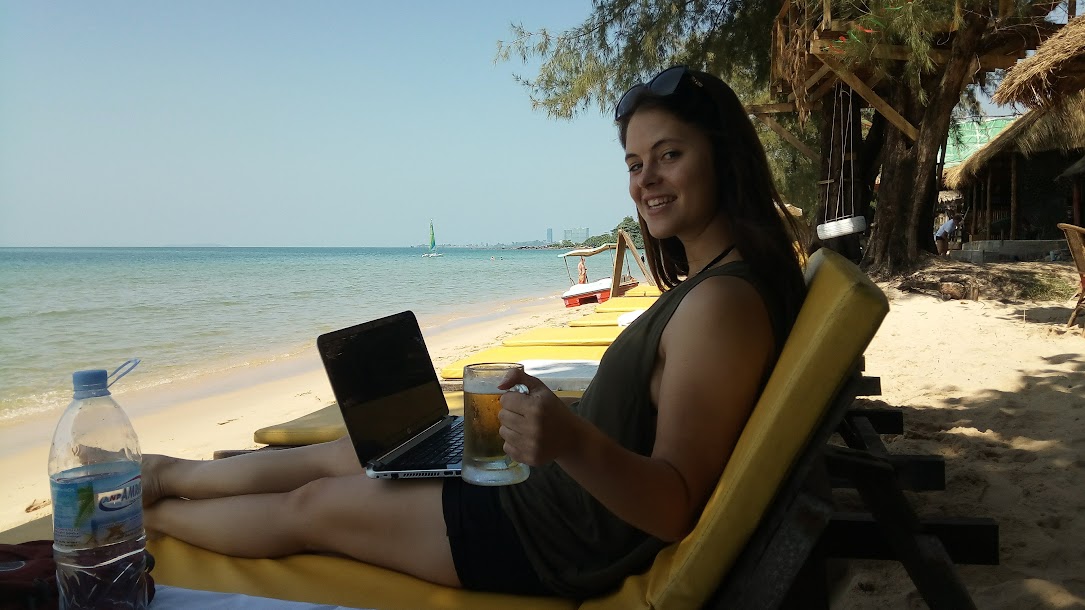 On our last day we met a fellow Canadian from BC who was working in the area, and he walked us to the local village nearby where there was more going on for nightlife and music and etc. We talked to a few people who had been travelling for a few years and literally living on next to nothing. They secured the amount of money they needed for the next day and that was it. Crazy lifestyle for us to even think about it. We definitely like our comforts.

We also met a guy who claimed to be american and who had just completed 4 years in Cambodian prison for stabbing someone who had attacked him (trying to mug him). He said he was born in Laos but moved to the states when he was under 1 year old. Our fellow Canadian friend from BC said he believed the guy at first but then the next day one of the owners of the restaurants said she saw the same guy around last year (which didn’t corroborate with his just got out of 4 years in Cambodian prison story). So we don’t actually know if he was for real, or if he was just telling his story to get money from people. But surprisingly enough he bought us beers and we spent no money on him so we didn’t really care if it was true or not (as we had free beers :P).

On to Koh Rong Sanloem

Okay, so we purchased a speedboat to and from ticket to the islands for $21 USD. It allowed us to go to either Koh Rong or Koh Rong Sanloem and return from either of them on whichever day we chose. So we chose to check out Koh Rong Sanloem for one night.

We stayed in a hostel with bunk beds as it was cheap for one night, but it was pretty open. There were walls on the side and mosquito nets on each bunk but the front was basically open to the ocean, so you could hear the ocean in the morning.  It was a nice island but the beaches were pretty filled with garbage unfortunately. Shockingly enough though, we ate at this restaurant on the beach and were served both days (night and day) by a 13 year old girl (we talked to her and asked) who works from 8am – 10pm every day for her family’s restaurant. She speaks the best english of them and so therefore she works. I don’t believe there is any school on the island for her. So next time you complain about a 10 hour workday, keep in mind this 13 year old girl works 14 hour days 7 days a week. She did a great job though!

Luckily enough though we actually met up with the three guys from Sweden that we crossed the Thai/Cambodian border with. And thanks to them we ended up finding a nice secluded, not busy, beautiful beach to hang out on. We also learned from them not to eat the meat on the islands because of how the many power outages cause the meat to thaw and refreeze in the freezers on the island.

Okay, so we set off to Koh Rong in high spirits. We planned to join in the Richie rich pub crawl (biggest pub crawl in Cambodia – started by a guy named Richie Rich who is from the states with a troubled past, in and out of jail and couldn’t’ get a job after so got clean and came to Koh Rong and started a pub crawl – they range from 130 – 180 ppl every Tuesday and Friday – and you get a free t-shirt with it), as well as we planned to join a a day adventure called Adventure Adam, that our friends had told us was a really cool experience. It turned out quite different than we imagined. Also, this is the island where Survivor was filmed for a few seasons! (some of it was actually filmed on parts of Koh Rong Sanloem too though).

So first things first, we found Richie Rich the man himself and bought pubcrawl tickets from him, then we found the Adventure Adam booth, talked to them and bought tickets as well.

Then, we got sick. I think I, myself had sun stroke and mitch took a chance with chicken that he shouldn’t have so we were both down and out for the night of pubcrawl, so we didn’t end up going. Then, the next day was the Adventure Adam boat/adventure trip. We both felt fine enough to go which was great but the wind was so bad that after taking us to a snorkeling spot (which was crappy – not many fish to see) and to a local village, we were marooned on an island for hours waiting for the wind to die down so that the tiny wooden boat we were in could actually make it back across the waters.

Despite it being a disappointment, there were still some highlights. We saw a local island village. Our guide also climbed a few palm trees and cracked open a few coconuts for us to try on an island. And, not that its a highlight, but we survived the boat basically being perpendicular to the water on some of the massive waves. Mitch was enjoying his free beer while I was planing our exit route and strategy if the boat ended up tipping.

Finally, once we got to calm waters, they let us jump out of the boat, shut out all the lights and see the light up plankton that we were swimming with. Every time you moved in the water your legs and arms lit up, because of the plankton around you. It was a pretty cool experience to end the hectic day with.

Now, as much as we’d like the adventure to be over, our trip back to the main land demands a mention.

We woke up the next morning intending to leave the island (remember we bought the ticket back already). However, the waves and wind were crazy. Huge whitecaps out on the water. We debated staying a few more days until it died down, but upon looking at the weather it was supposed to stay like this and get worse over the next week. After talking to our hostel main desk, we decided to purchase an extra ticket for the ferry (versus the speedboat we had tickets for) as it was a bigger and more sturdy boat.

Upon waiting in line for the boat we met a woman (Mary) from Holland who was on our Adventure Adam tour who we ended up sitting next too on the ferry to the main land.

I don’t know how to describe this terrifying, horrific journey to you honestly. The waves must have been at least 10 – 15 ft. We were in constant fear of the boat flipping (it was a 45 min ride) and about 75% of the ferry boat passengers were puking into the barf bags provided. As I get sea sick, I popped a gravol so I was fine, but, Mitch didn’t because he normally is good. However, half way through the journey, the waves are going over the top of the boat and so none of the windows or doors are open, causing it to get extremely hot in the boat. I looked to Mitch and he was pale and sweating like crazy and about to vomit I’m sure. I told him to put his head back against the seat and look out to the clouds. Somehow, through shear will alone I’m sure, he managed not to puke. Myself, him and our travelling companion Mary were probably one of the only row of three people who didn’t throw up from sea sickness on this voyage.

Of course, for anyone who knows me, they know I’m a strong swimmer, and Mitch is also pretty good. I was just praying the entire time that we didn’t flip though, because only one of the back doors to the ferry was working, and they had packed more people than were seats on the ferry. So while Mitch was focusing on not revisiting his breakfast, i was planning out how many people we’d have to crawl over to get out the one working door if the ferry did decide to flip. We had lifejackets thank god, which i insisted we wear. But, we definitely still would have needed to exit the ferry if it flipped. Mitch laughs because I told him I was glad when majority of the boat became sick because I said that made them easier to get through if we were to flip. Does that make me a tad bit evil? Maybe, but I was more scared than I have been in my life.

Needless to say, we will be staying on dry land for quite a while now. Tan or not.

We did arrive to Sihanoukville safely, and despite the ferry turning around to take new passengers out to the islands (they had no idea what they were in for), we grabbed a taxi to Kampot (our next destination) with two other people and thanked god we were on solid land.