Kampot is a quiet little city on the edge of an a mountain and a river. 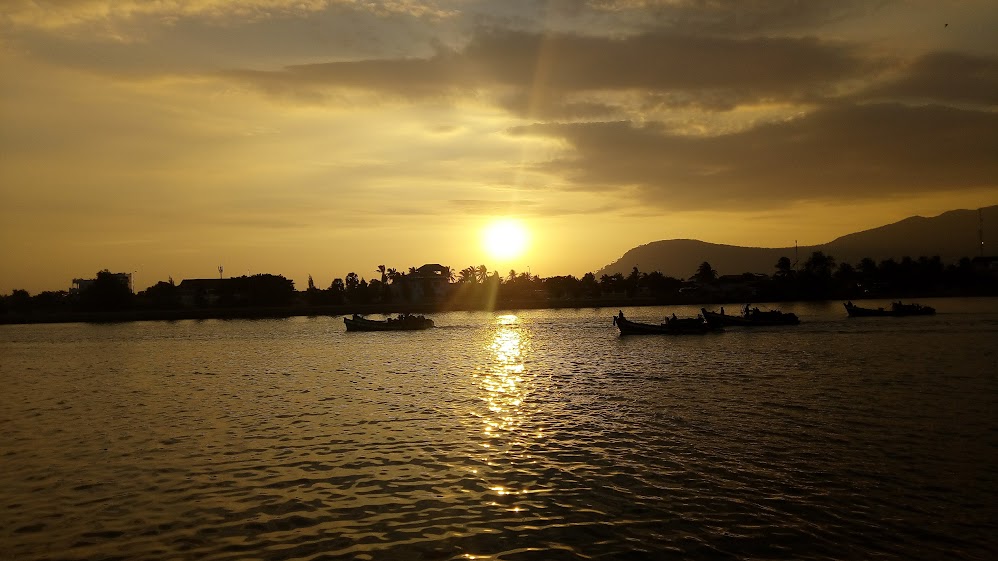 Our first day in Kampot we didn’t really do much, other than walk to a guesthouse named “Porky’s” owned by a guy from Holland (friend of the lady we met on the ferry) and have the most delicious burger we’d had in all of Asia. Other than that, we kind of just hung out and walked around the city (you can walk it north to south in about 30 min).

Our second night in Kampot (our first one we just relaxed) we took a $5 USD tour on a ferry boat that left at 5:30pm (just before sunset) and drove us up and down the river at night. A free beer was included in this tour and as well as a trip to see the fireflies in the remote trees very north on the river in the dark. We drove for about a half hour south down the river until our boat stopped, turned off its lights and parked near the riverbank so we could see the fireflies in the trees.

The next day we rented scooters (motorbike things – $5 USD/day each) to go up to Bokor Mountain. It was insanely windy when we went up it!

Up at the top of this mountain we had fun climbing over rocks of waterfalls called the Pokopvil Waterfalls, and then seeing the abandoned french colonial Catholic church and old time 1920’s grand palace. The french occupied this area before the Vietnam war and left it abandoned when the entire region decided to rebel against their influence in the country about ten years before the Vietnam War.

Side note: My key fell out while I was driving up the mountain but luckily enough Mitch’s motorbike key worked for mine as well so we kept on going. After spending 30 min trying and failing to find the key of course.

Kampot was a nice quiet city that we enjoyed just relaxing in. We would have loved to take in the pepper farm nearby and the city of Kep nearby but Mitch was still recovering from being sick so we played it safe.

Next stop –> Phnom Penh (Cambodia’s Capital City – Also known to be the closest city to the largest Killing Fields).