First off, if any of you have seen the movie “The Killing Fields” then you should know this city. It’s the city that the first half of the movie takes place in.

Also, there is a new movie about the same time in history called “First they Killed my Father” which is on Netflix, and this city is the city they start out in too.

Of course this city is more than just a showcase in a few movies during a terrible time in the Cambodian people’s past, but that’s just the easiest way to get people to recognize it.

Okay, so we took a bus from Kampot (our last stop) to Phnom Penh. It was 6 hours or so with a 30 min lunch break included so not bad. That got us into the city around 2:30pm. We decided to just relax and walk around the area we were staying in (downtown river front area) and get our bearings.

We managed to find a park, where I decided to relive my monkey bar days from my childhood. Mitch decided to show me up in pull-ups (although it didn’t take much seeing as I couldn’t do one) and managed to impress a few 12 year old local kids who could only do a few themselves. 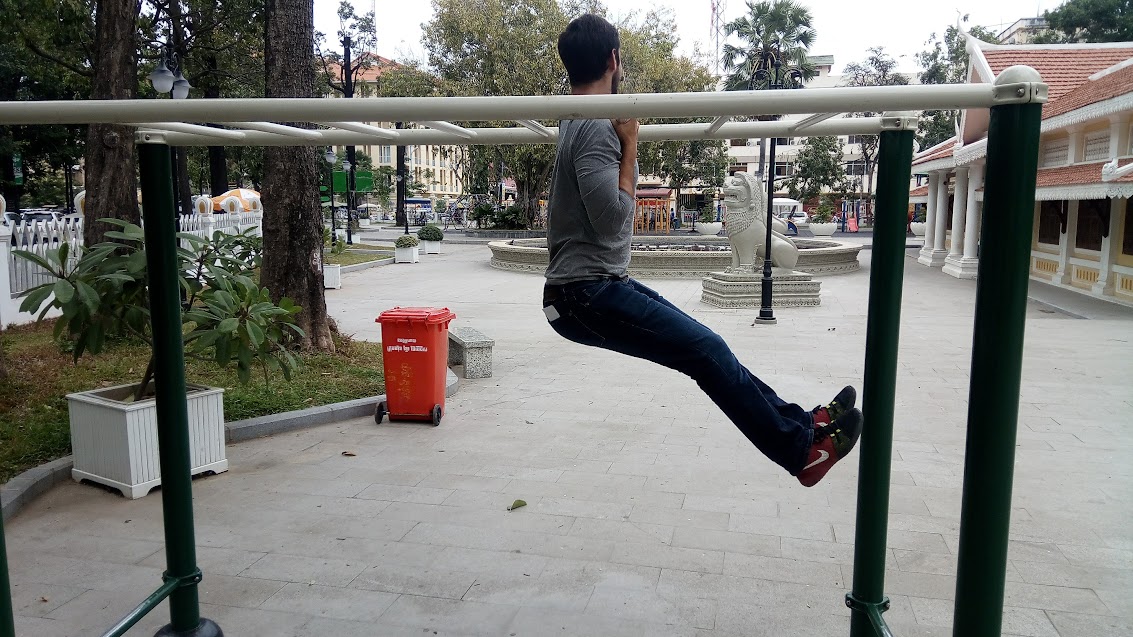 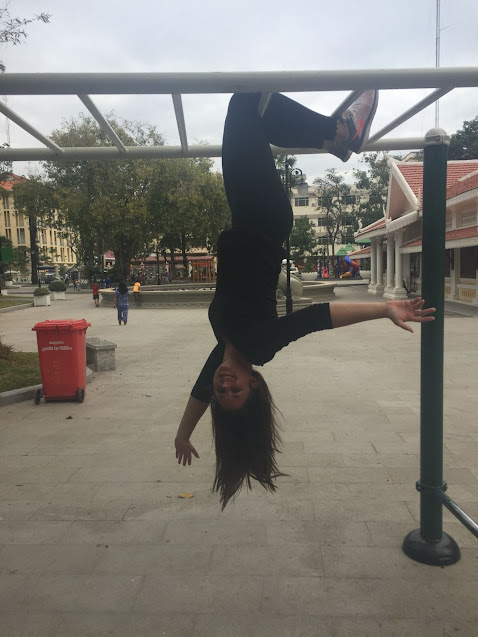 Then we happened upon a circle of local men playing their version of hackie sack essentially. And there were a few of them that were really good! So we sat and watched for a bit. 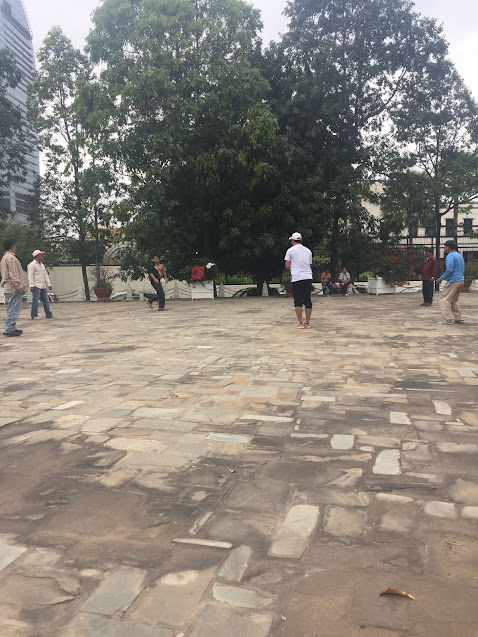 Then we went back to our place grabbed something to eat and a few beers, overlooked the river at night and called it a night. 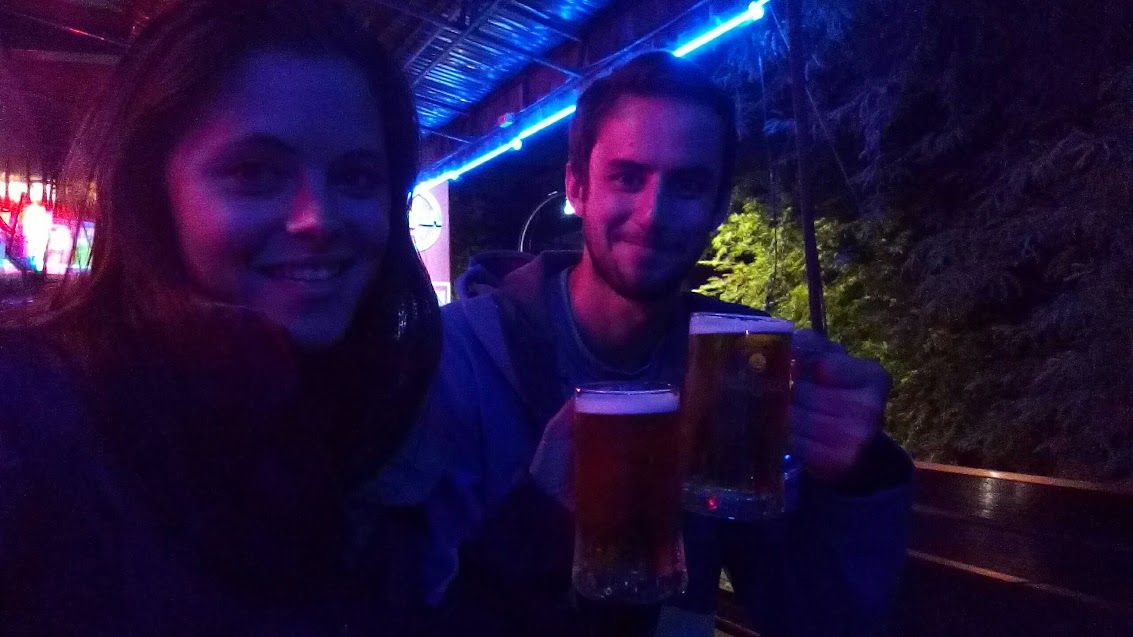 The next day we hopped on a bus tour that took us to both the S21 Prison and The Killing Fields.

For those of you that don’t know, in 1975 Cambodia had a leader rise to power named Pol Pot. Cambodia used to be a massive Ancient Empire with grand temples all over Asia – the Angkor Wat temples (from our Siem Reap blog) being some of these temples. Pol Pot wanted to restore Cambodia to the glory that it had in ancient times and thought the way to do it was by destroying modern life and reverting back to when they were a self-sufficient agricultural society. In 1975 he evacuated all major cities in Cambodia completely and forced the residents out into the countryside to work in forced labour camps (mostly agricultural). All journalists, politicians, lawyers, artists, and people who had made their living in a literary world were thought to be detrimental to the new regime and were killed if found out. Also, books and culture where destroyed by Pol Pot’s regime (called the Khmer Rouge). Anyways, this forced labour and terrible living and eating conditions in the camps (soup for 2 meals a day and you could apparently count the grains of rice in the soup), lead to many Cambodian people dying of starvation. Others died by a bullet in the head because they spoke out against the regime, or were reported as spies, got caught stealing food to feed their families or all sorts of other nonsensical reasons. It ultimately resulted in 2-3 million people dying in just 4 years.

The S21 Prison was an old high school turned Prison for Pol Pots’ Khmer Rouge regime. Here they brought prisoners to torture and kill in various ways with various mechanisms.

These are the makeshift cells made in this place that was once a high school.

After this regime ended, this prison was found by “following the stench of rotting flesh in the deserted city” as described by the Vietnamese photographer who was the very first to photograph the atrocities found here.

In some rooms there are pictures taken by this man of bodies lying dead, of the people who had been tortured, and the beds on which they had been laying have been left in the room, never having been moved. 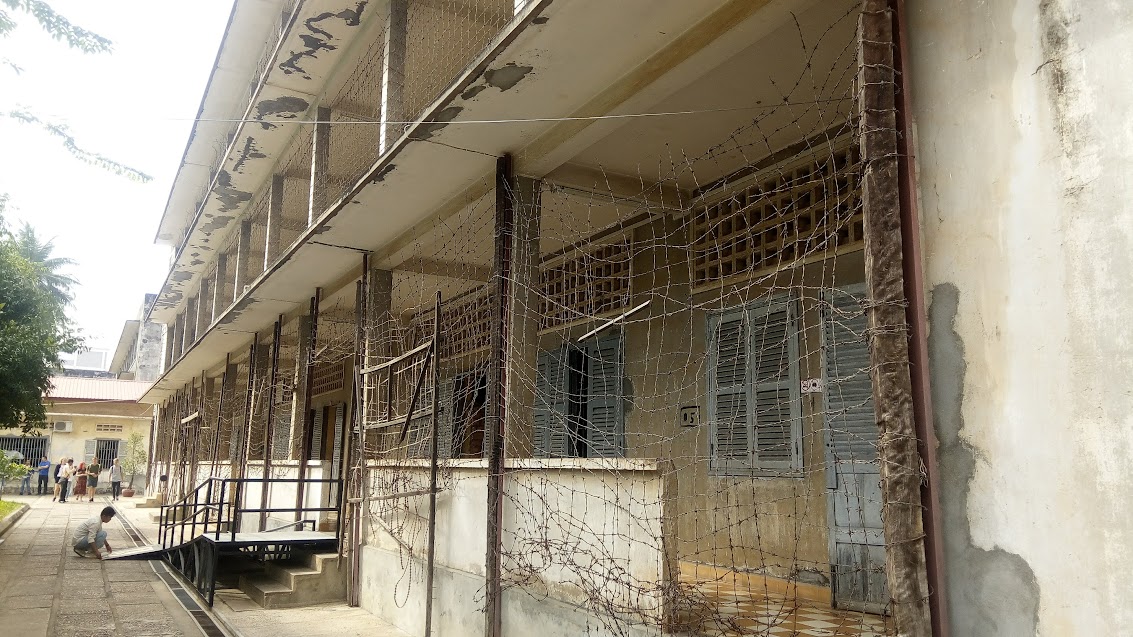 The prison has been kept in the same position it was found in, in 1979. No restoration has taken place, only cleaning of course. It’s a very eerie feeling walking among the place. Considering it was only 38 years ago that this happened.

Next, we went to the killing fields.

Now, all over Cambodia there were killing fields during this regime. Essentially all the bodies of people who died of starvation, and who were executed by Pol Pot’s government had to be disposed of somewhere. Mass graves sites were dug in fields and bodies were dumped in these. These are named the killing fields and the largest killing fields are about 20 min outside of the city, Phnom Penh. Many victims of the prison we visited ended up in these killing fields too.

Of course cleaning and removal of the bodies found, once Pol Pot was deposed, commenced. Now a days, visiting the killing fields means walking around where there are holes in the ground that millions of bodies used to lay in. I’m sure there are still bones that were not found that are buried under the ground still. 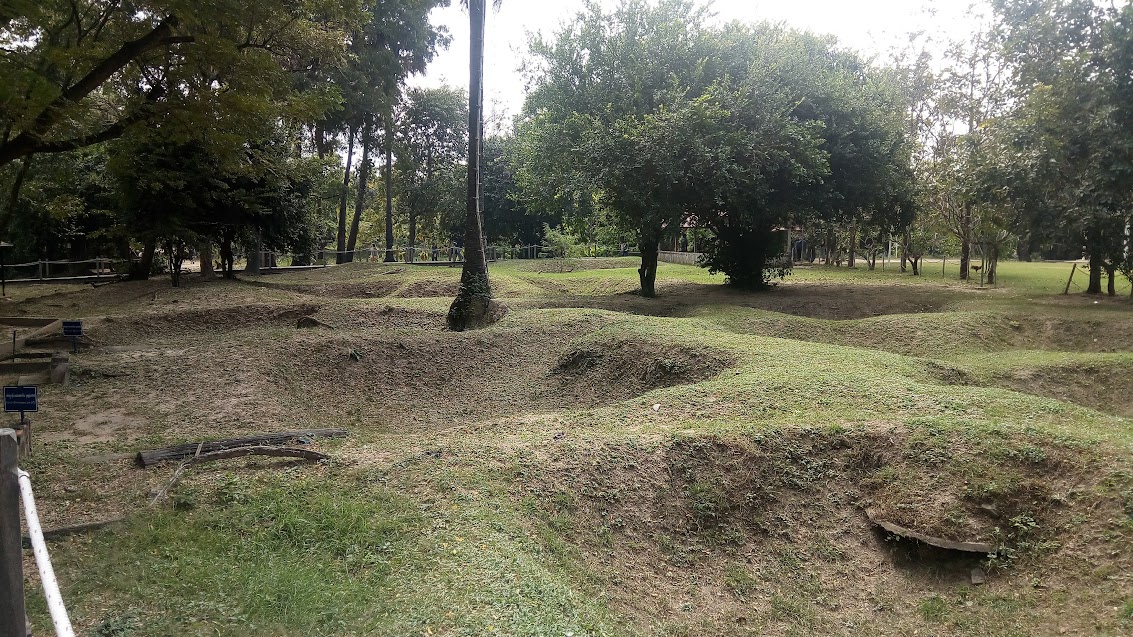 The skulls and bones of many victims are compiled in this monument in the middle of the killing fields. If you look closely you’ll see that the white spots inside the monument in this picture are skulls. 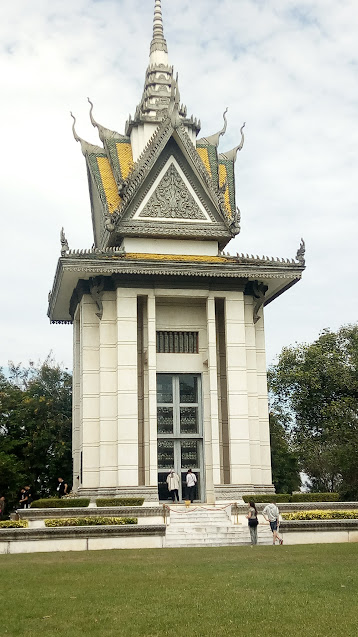 While the killing fields was a must see for history’s sake, the prison actually should be where you spend the majority of your time on this day trip because it provides a better look into this time period. Through displays it provides all of the information you’ll need about this terrible time in Cambodia’s past.

Sorry to be so blunt about all of this stuff, but I personally feel that not enough is taught about this in schools. Or other genocides for that matter. It seems school curriculums mention Germany in World War 2 and find that sufficient.

The saying is that we must know about history so that it doesn’t repeat itself. If that’s the case then why do they only mention World war 2 as the genocide in history class in school? Both the Cambodian genocide and Rwandan genocide happened after World war 2 (1970’s and 1990’s respectively), and I’m sure others I’m unaware about, which means history is still repeating itself. Who knows what’s happening in Syria right now or the middle East. People know about Pol Pot but don’t know the story. I didn’t even know it until I was here.

So, because of this, I didn’t want to sugarcoat anything when telling this story as I believe everyone should know about it. 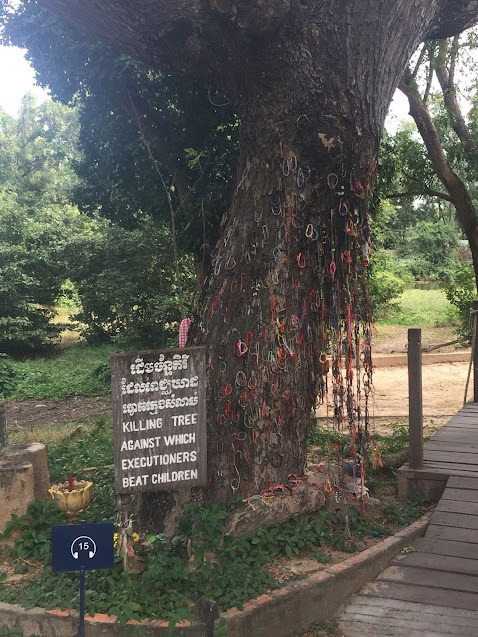 Back to Phnom Penh

After this half a day tour, we spent an hour or two walking around on a walking tour our friends Sophie and Ulrick had told us about (as they had visited a few weeks before us). We saw old cinemas and unique buildings, while stopping for beers along the way. 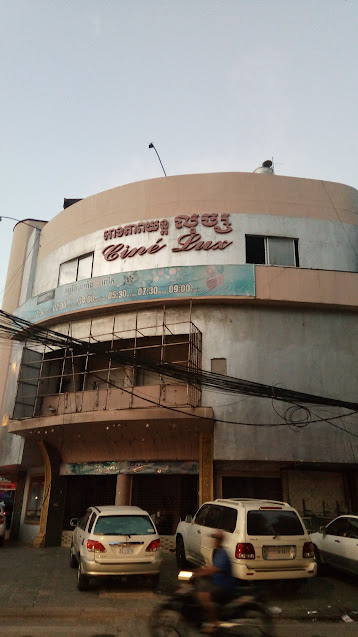 Eventually, after stopping at a sports bar for wings for Mitch, we arrived at the night market.

We decided to be risky and try grilled Frog. We only ate the meet on the legs as there was none in the body and we didn’t know if we were supposed to eat any other part of it. It was actually really good ! 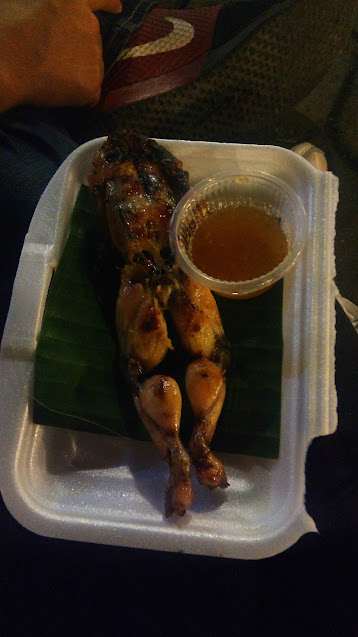 This is the sitting area in the night market. 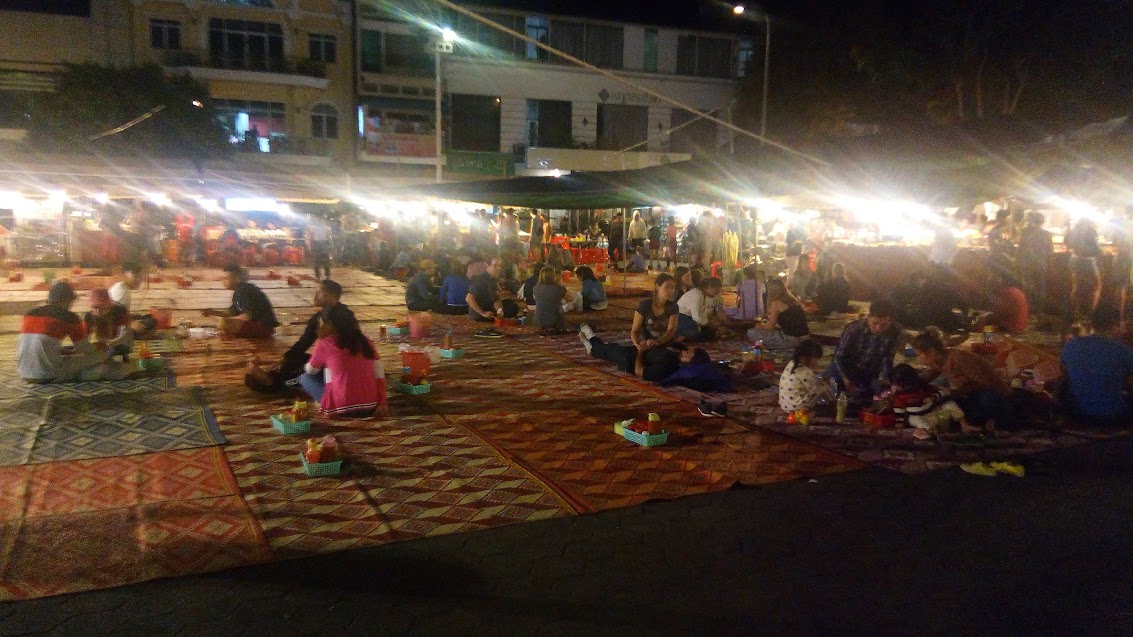 Then we grabbed some real food and headed back to the hotel room ready to take off back to Siem Reap the next day.

We actually liked Phnom Penh. It wasn’t as crazy as people told us it was. And staying downtown made a huge difference atmosphere wise.

Little to our prior knowledge we ended up staying on a street most well known for “hostess bars.” However, that being said, our hotel was great, just made for interesting “site seeing” on our walk home at night.

We were getting bored the last night as there’s just a lot of restaurants and bars and we aren’t big party people.

We felt that 2 nights in Phnom Penh was the perfect amount of time for us . If you like to party or spend alot of money on food you’d probably like to stay longer. If not – 2 nights is good.

Next stop –> Back to Siem Reap for Christmas and New Year’s.