So, if you remember from our earlier blogs, we’ve already been to Siem Reap – it was our first stop when we first came into Cambodia. We decided to head back here for Christmas and New Years because we loved the city and felt that we knew our way around.

We arrived back in Siem Reap on the 23rd of December. We arrived into the city late so we decided to head to pub street to relax with some of that $0.50 beer. It was actually really nice how many decorations that the city had put up for Christmas for all of its tourists (Cambodian people don’t celebrate Christmas – mostly a buddhist culture). 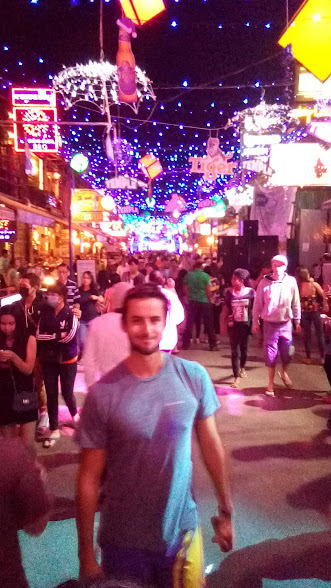 Because we are travelling out of a backpack and our money is being spent on travelling, Mitch and I didn’t want to spend a lot of money on Christmas gifts for each other, and, in all honesty, there’s not a lot of things you can buy here anyways other than trinkets.

We decided to go to the Night Market near our hotel – this market has little trinkets, souveniers, and clothing, among other things. The thing is though that in order to buy things at these markets you need to haggle for prices.

We decided to each take $10 and see what we could get for it through haggling and bartering. The goal was to buy gifts for each other for Christmas morning and see who could get more for $10. We split up for 1 hour to do this, then kept the gifts hidden in our bags until the next morning, when we opened them.

Turns out we tied the competition because we both got each other 2 items. Mitch got me a shirt that I had my eye on the day before as well as a hand painted canvas for our walls back home. I got Mitch a bracelet (totally a guy one, lots of people wear them around here while travelling) and a small jar of coloured sand that has pictures drawn into it as well as the words “Cambodia.”

So, after opening up our gifts to each other Christmas morning, we decided to treat ourselves to a Massage. It was $7 USD per person for a full body 1 hour massage. We picked a massage parlour on the corner of the street that we had walked by a few times.

The massage was a decent massage, but, as we were about 5 min from our massage ending, another man came into the room we were in. This room is a room with 5 mats on the ground and curtains dividing them. As we were leaving, we heard this man ask his massage lady about “special massages.” Even though he was whispering, we could definitely hear every word of the conversation. Thankfully, we were leaving as this discussion for the price of the special massage was still being decided on. After we got back to our hotel, I did some research and found a blog of a man who had written about all the massage parlours in Siem Reap that offer these “special” services. Turns out that the massage parlour we had visited in Siem Reap is actually the best one known for those “special” massages.

Needless  to say, when we got a massage a few days later, we did our research about reputable places, and found one for the same price that had professionals working there!

After our massage we treated ourselves to a stone oven pizza that was delicious! We bought a bottle of wine, ate pizza and watched a movie in our hotel room as our Christmas Night. 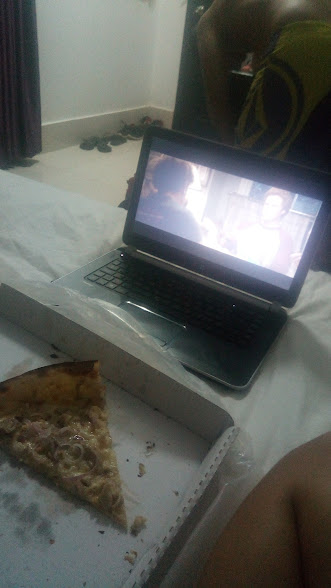 After that we walked around the city for 30 min, just to see what was happening for Christmas – not much but Christmas lights – and then we went back to the hotel and had a relaxing night. 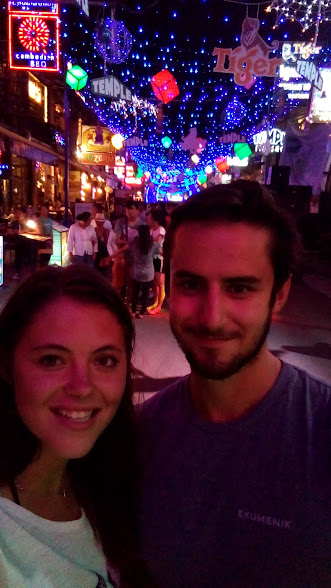 We decided to do a few less popular things in Siem Reap this time. Since we’d done all the popular/touristy things the first time around.

We visted the Landmine Museum

Cambodia has hundreds of thousands of landmines all over the country. They were planted after the Khmer Rouge (Pol Pot’s regime) lost power and Vietnamese took over. The Khmer Rouge were still fighting to try to gain power back which resulted in 30 years of guerilla warfare, in which landmines were placed everywhere. Also, the United States dropped bombs on Cambodia before the Vietnam war because the Khmer rouge were backed by Communist North Vietnam forces and so there were leftover bombs that never went off when they were dropped that added to these minefields. 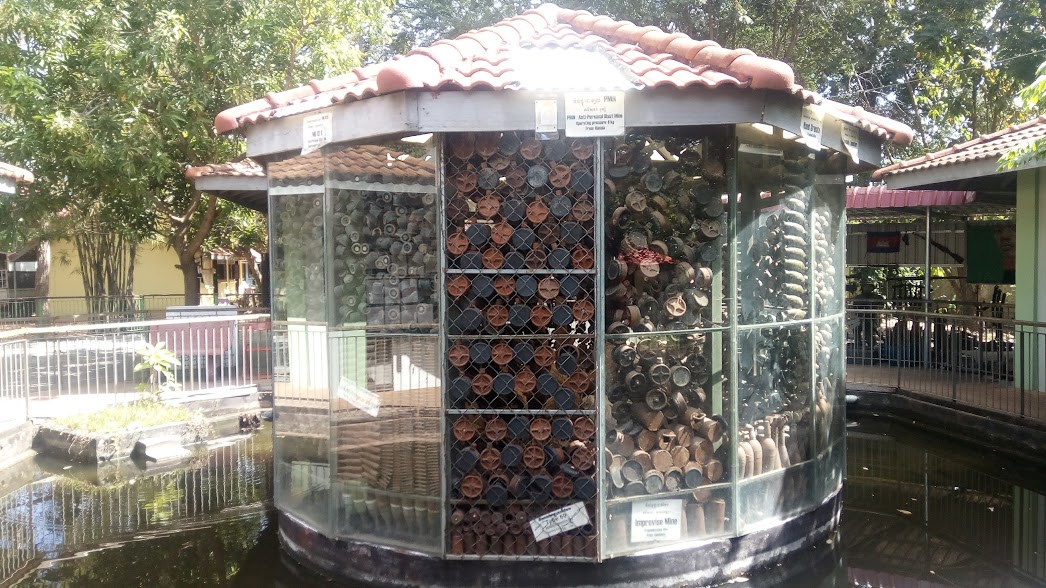 The museum was started by a guy named Aki Ra, who was ex military and started clearing landmines on his own by hand. He kept the disassembled landmines at his house and people started asking to see them, which eventually led to him opening up a museum of all of the landmines he had disarmed. For 10 years his wife and him cleared these things by hand. In 2006 (I think) he was told that the way in which he was clearing them was no longer safe and there was now international safety standards that he had to adhere too. He changed his methods to reflect those global standards and founded a foundation to start clearing landmines from Cambodia. His foundation employs Cambodian people. While they’ve done great things, there are still so many landmines to clear from Cambodia. The museum entrance fee was $5 and while I can’t remember the exact split, the museum tells you where that $5 goes to. Part goes to helping children who live at the museum (they are children affected by landmines). Part goes to sustaining the foundation clearing landmines. And a small part goes to keeping up the museum.

1 in every 5 people in Cambodia has been affected by a Landmine.

Side note: We took a tuk tuk to this museum (about 30 min away) and on the way we saw local people fishing. 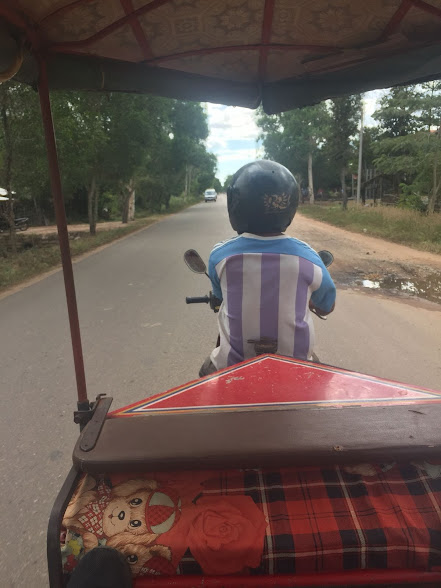 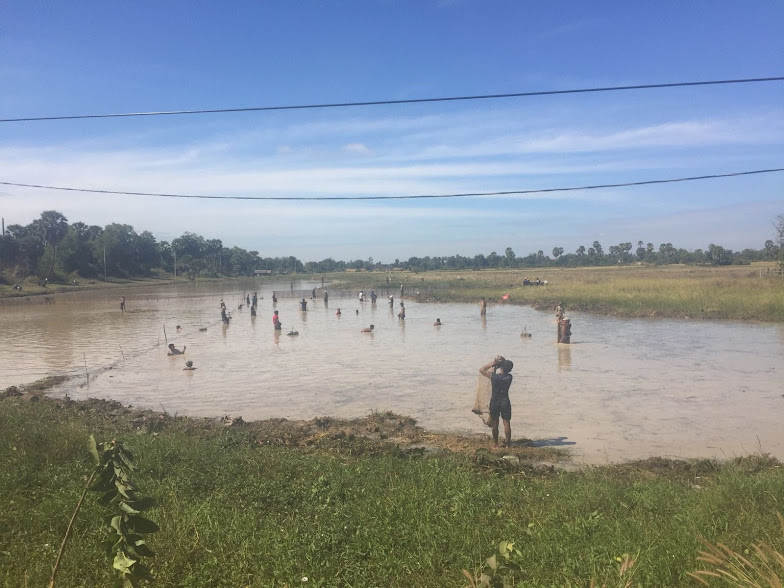 We also saw a Movie!

For $3.50 USD we saw Jumanji in 3D at a cinema in Siem Reap. Its an English movie that plays with Thai subtitles. But you really don’t even notice the subtitles. It was great! 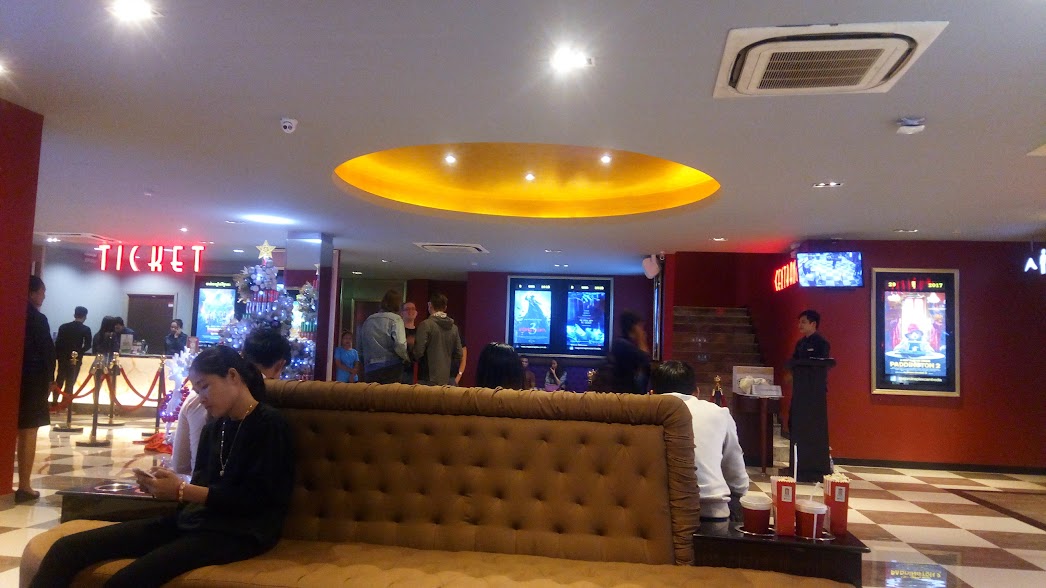 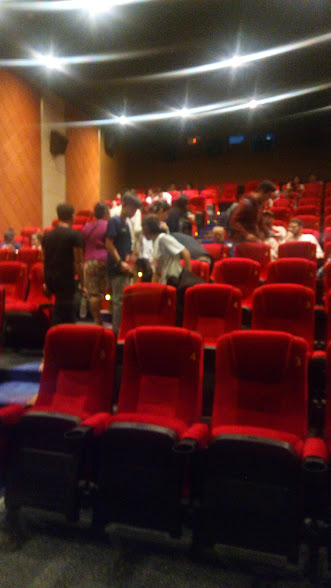 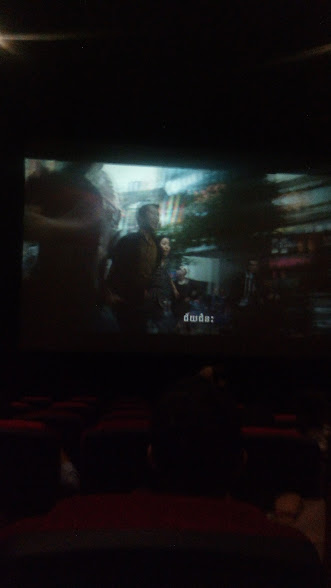 We decided to take a chance and have fish eat the dead skin off our feet.

These fish tanks are all over Cambodia and for $2 USD (free beer included) we decided to give it a try. 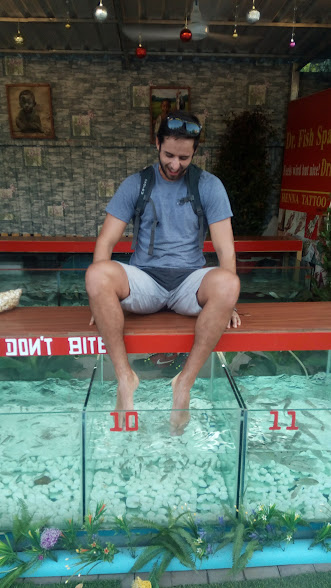 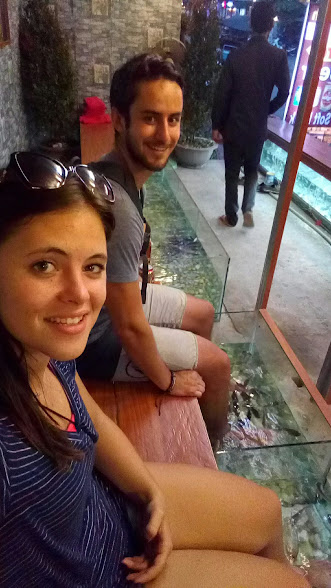 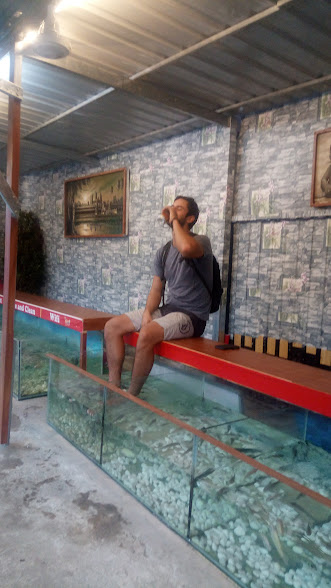 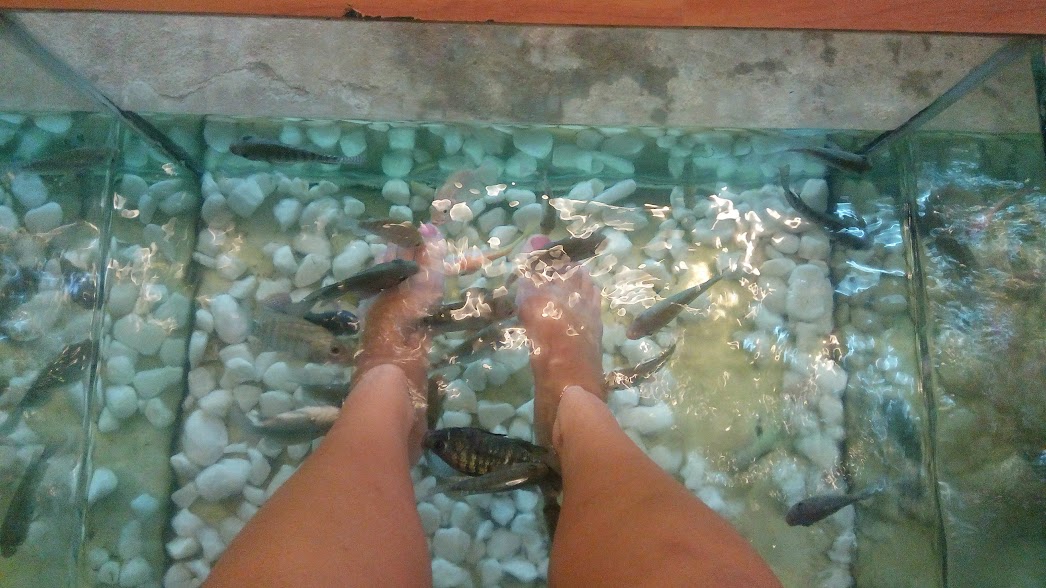 First off, we bought tickets to the Phare Cambodian Circus in Siem Reap for a 8:00pm showing (only 1.5 hour show). It was amazing. 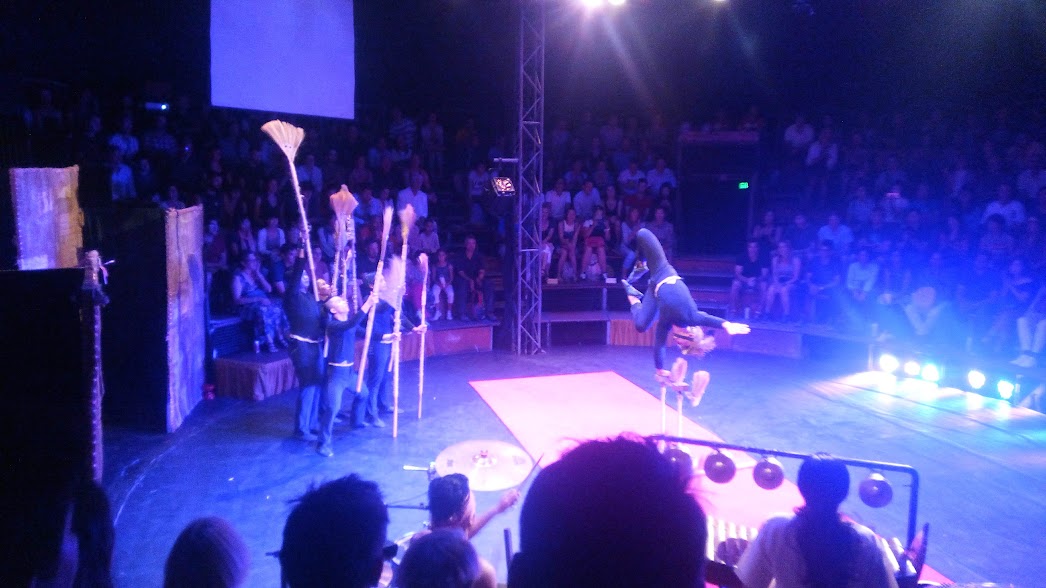 The circus is a not for profit that gives poor Cambodian children an education and career in the circus – acting, acrobats, music, etc. It provides them with one meal a day for free and the training they want to become a professional performer. Then once they complete their training, they are paid to travel with the circus and perform. The circus actually travels across the world so it gives these kids, now adults, an opportunity to travel outside of Cambodia as well, and provide for their families. 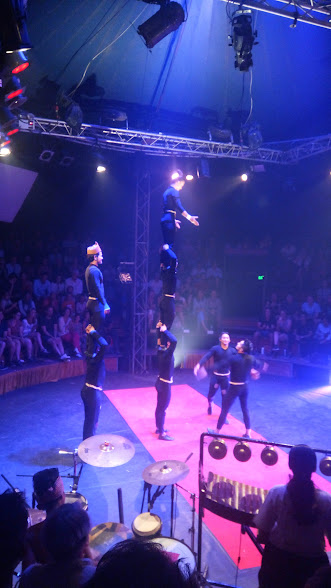 One of the best things we saw in Siem Reap. It was very entertaining and impressive and the ticket only cost $18 USD.

Then, we tried to walk down the main party street at around 10:00pm after the circus. Pub Street was crazy. 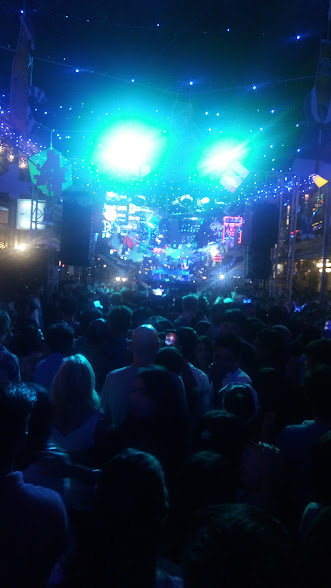 Locals actually celebrate New Years so there were so many locals out compared to tourists which was nice to see. Although after trying to battle through the crowd for one block and having it take us 20 minutes we decided enough was enough and we found a side street less populated to party on. 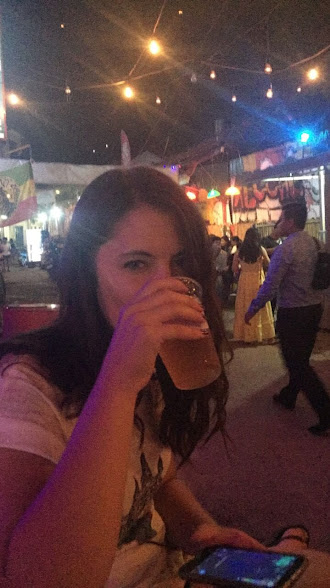 Eventually we met other travelers from Germany, New Zealand, Australia, Japan, and England and brought in the New Year with them!

The next day we enjoyed our last full day in Siem Reap by just hanging out in the city. Mitch had some recuperating to do from the night before so we just took it easy.

We randomly happened upon a free dance show in a public market. 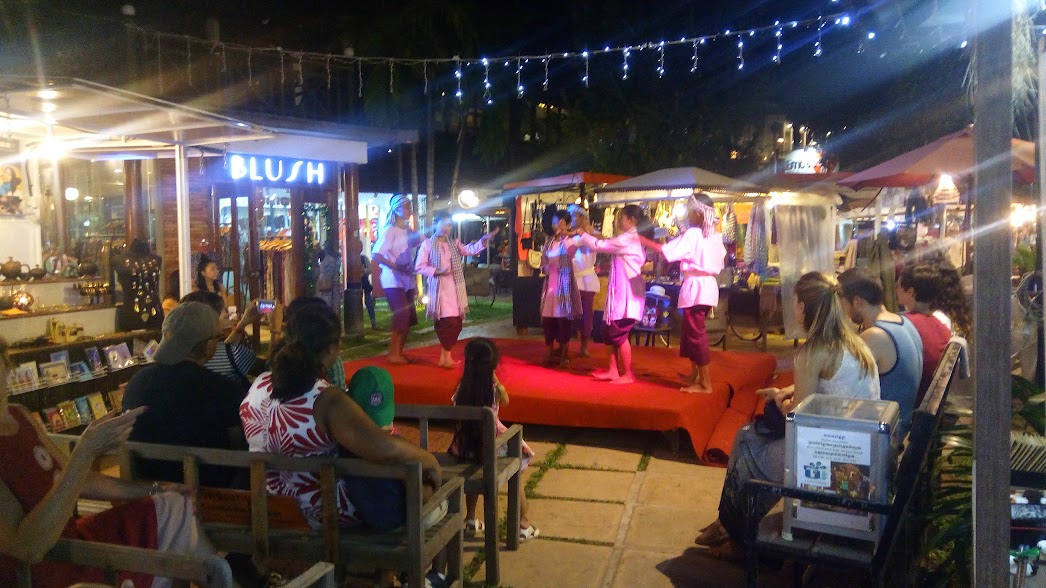 Mitch also found a gym to work out in for $1/day. 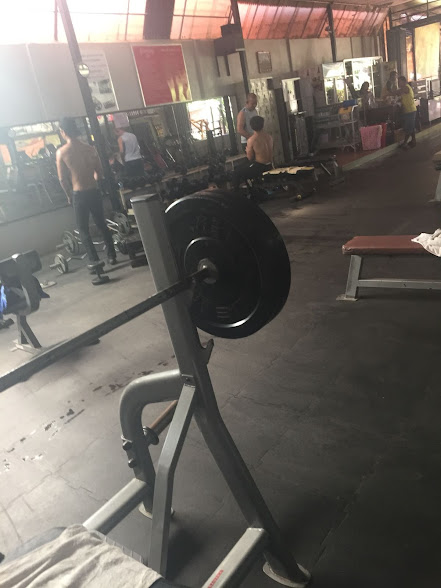 Then on January 2nd our 30 day visa to Cambodia was up and we hopped on a bus to take us back into Thailand (Bangkok). We were sad to leave Cambodia as we really felt we learned so much about it as a country and everyone was great.

Next Stop –> Bangkok Again (only for a few days). 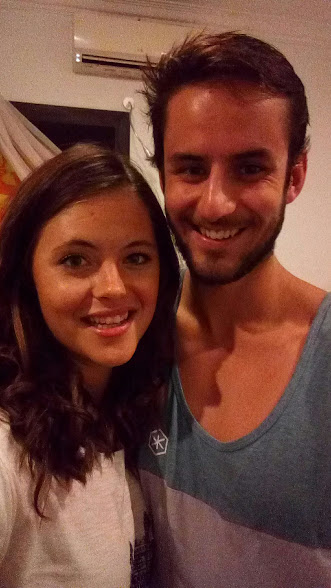