Pai is located about 3 hours away from Chiang Mai (where we were staying after our camping trip) and one of the fun things to do around here is rent a little motorbike and go up the mountain ourselves (instead of public transit). 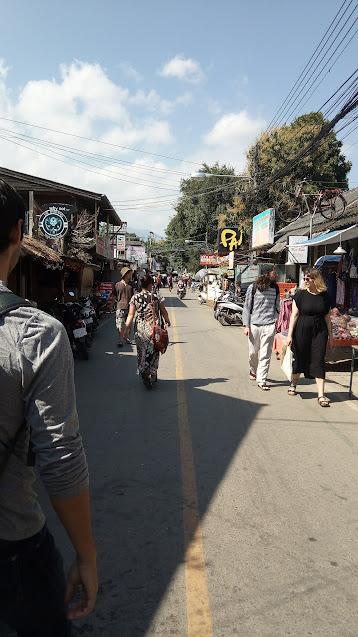 Mitch and I got a good deal on a motorbike each for 2 weeks (as we planned on scooter-ing across Northern Thailand after Pai as well), packed our bags and headed out on the road. It took us 4.5 hours total with stops and traffic. The road up the mountain is super curvy and the internet tells us there were 762 turns on the road (curves in the road) on the way up the mountain. While we didn’t count, we’d say this sounds accurate.

Anyways though, we got up there and settled into the place we had booked online. It was a place about 5-10 min out of Pai that had both dorm rooms and private bungalows. But the best part was that it had huge outside grounds. With a treehouse, a bar, restaurant, and most importantly a campfire. 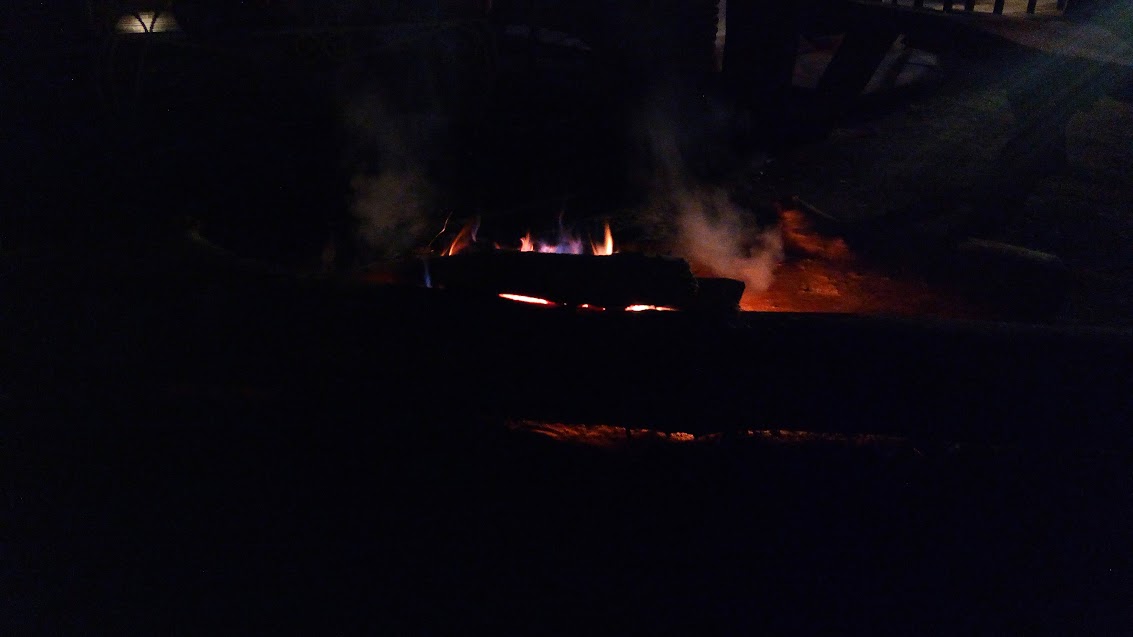 We quickly made friends around the campfire the first night who told us about the nightly walking market in town every night from 6:00pm-8:30pm. Basically you walk up and down this street in town and there are a bunch of street food stalls all over the place selling everything from noodle and rice bowls to sushi. It was where we ate supper every night. 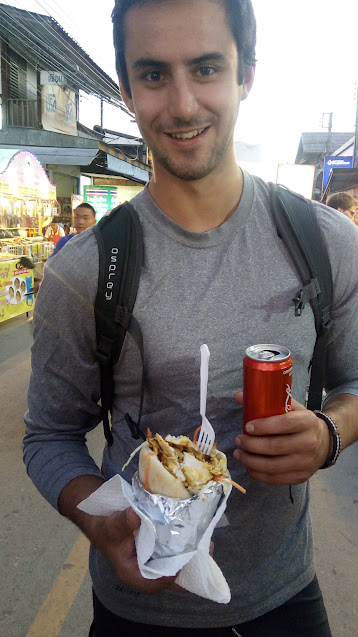 Our first day we headed to the Pai Canyon. 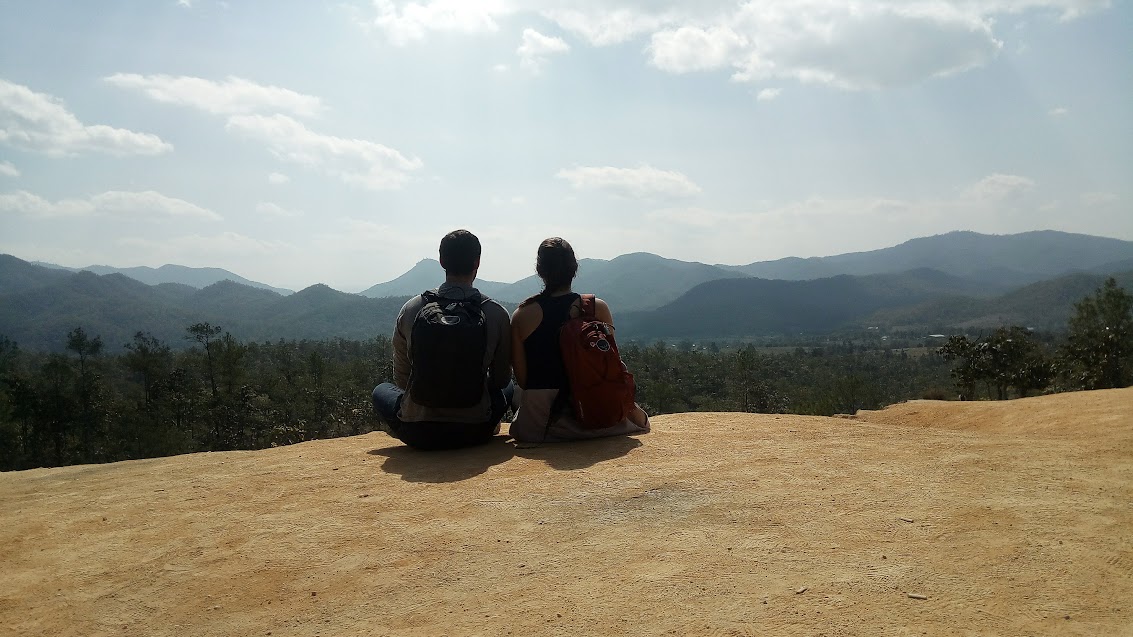 Essentially it’s narrow pathways on top of steep drop offs. It was really great for views and just hanging out. 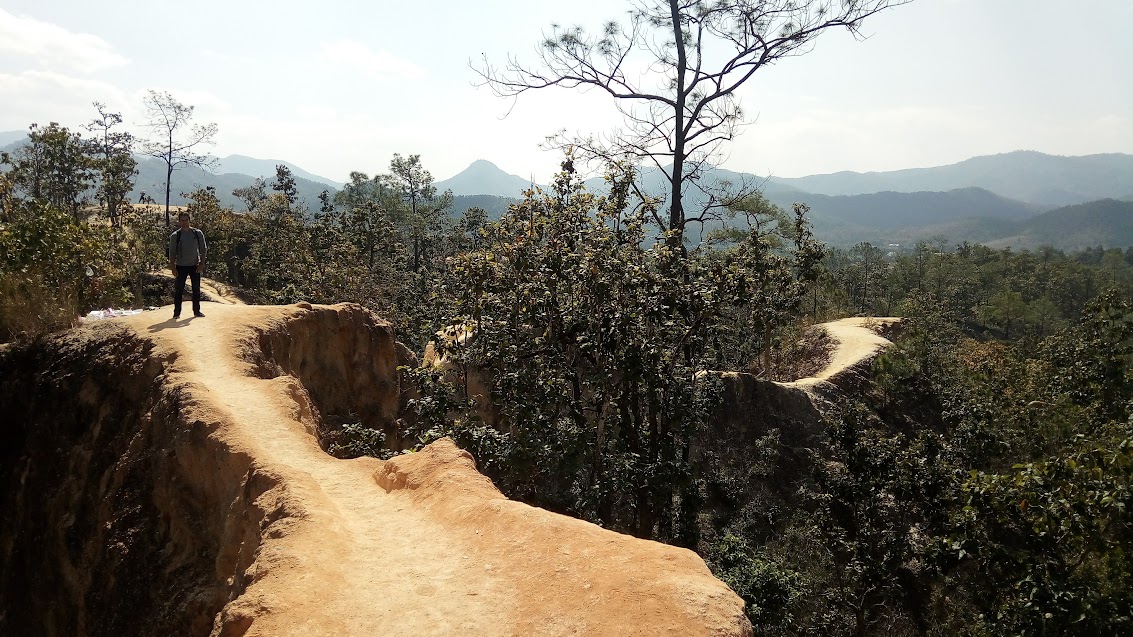 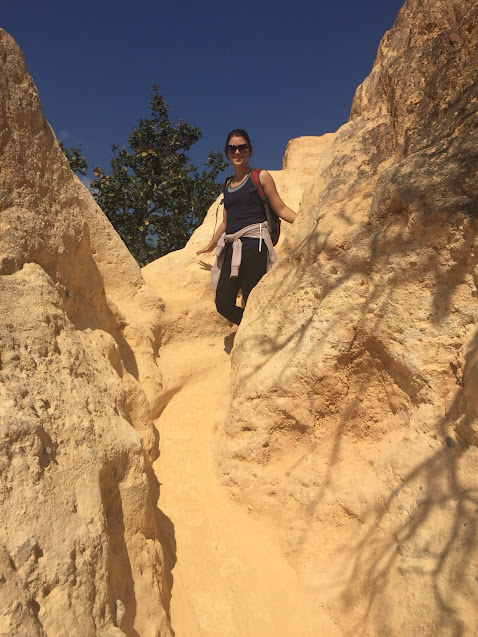 We even found a spot near a little tree and sat down to read a book for a while. 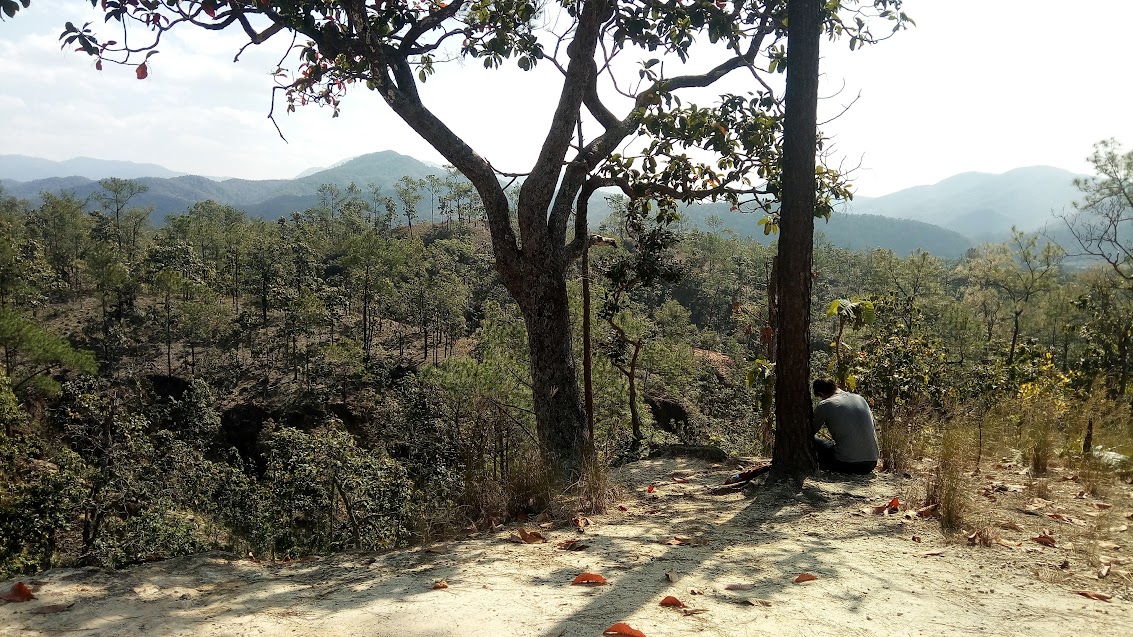 Then we headed down a road that we knew was home to multiple Elephant Sanctuaries. We knew one called Thom’s Elephant Camp would let you pay $1 CAD to feed the elephants so we decided to go check it out. 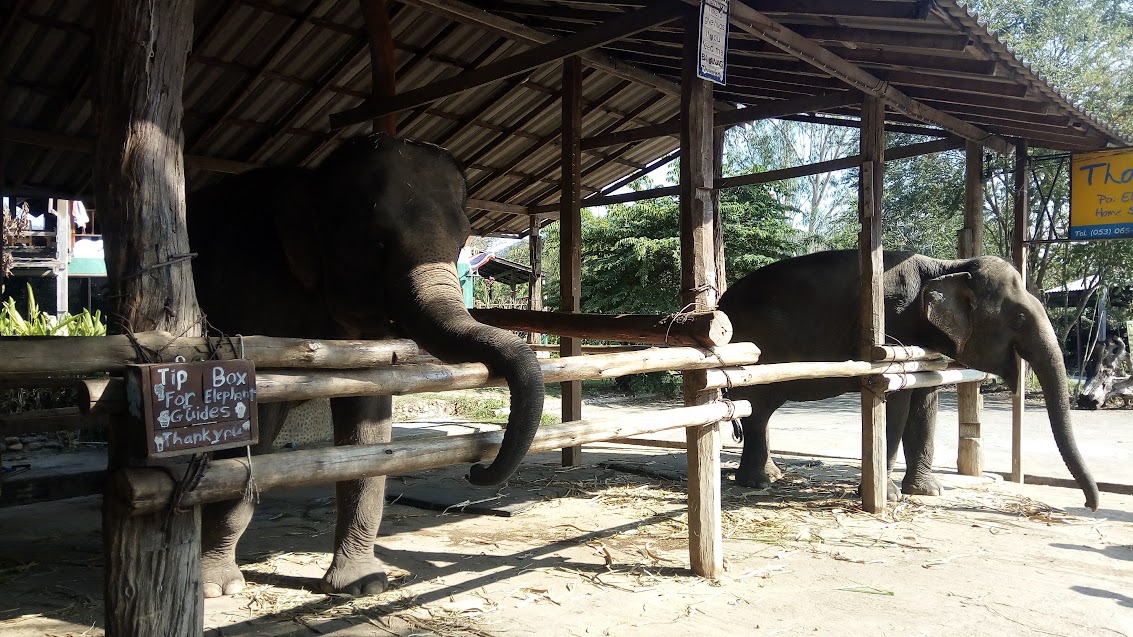 The one elephant “Tatdao” (Tat  – dow) (elephant on left) was super playfull and got jealous and grumpy when we’d feed the other elephant instead of her. 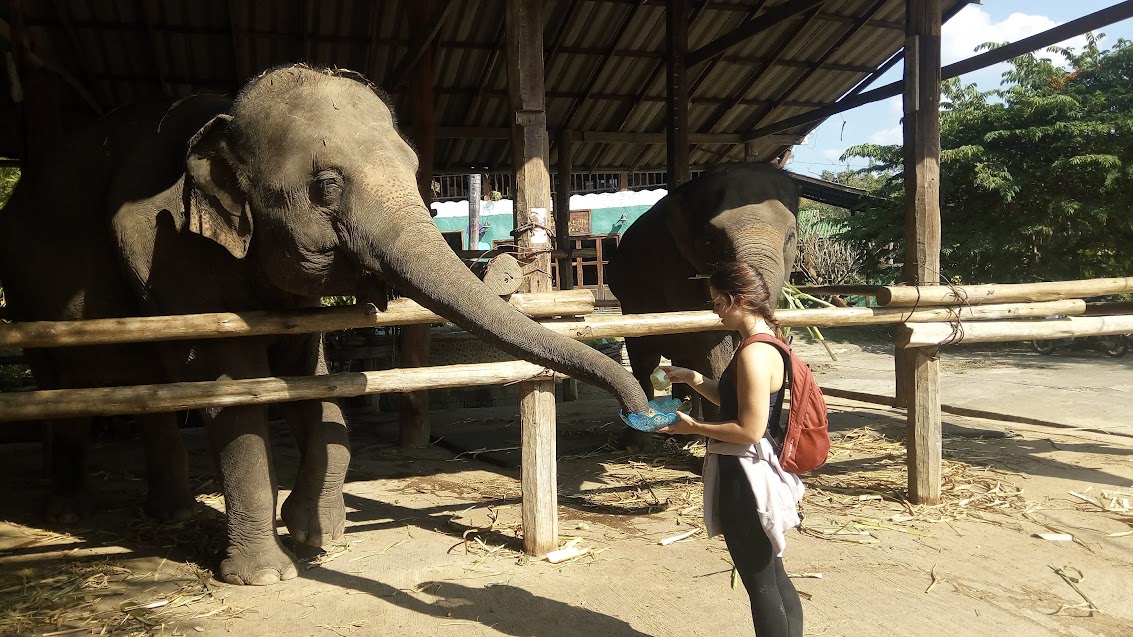 We couldn’t believe how big these animals were in real life. Its one thing to know elephants are big, and another to stand next to them and realize how strong their trunks and legs are and how they could easily crush you if they wanted. And these were Asian Elephants, African Elephants are even larger I believe. 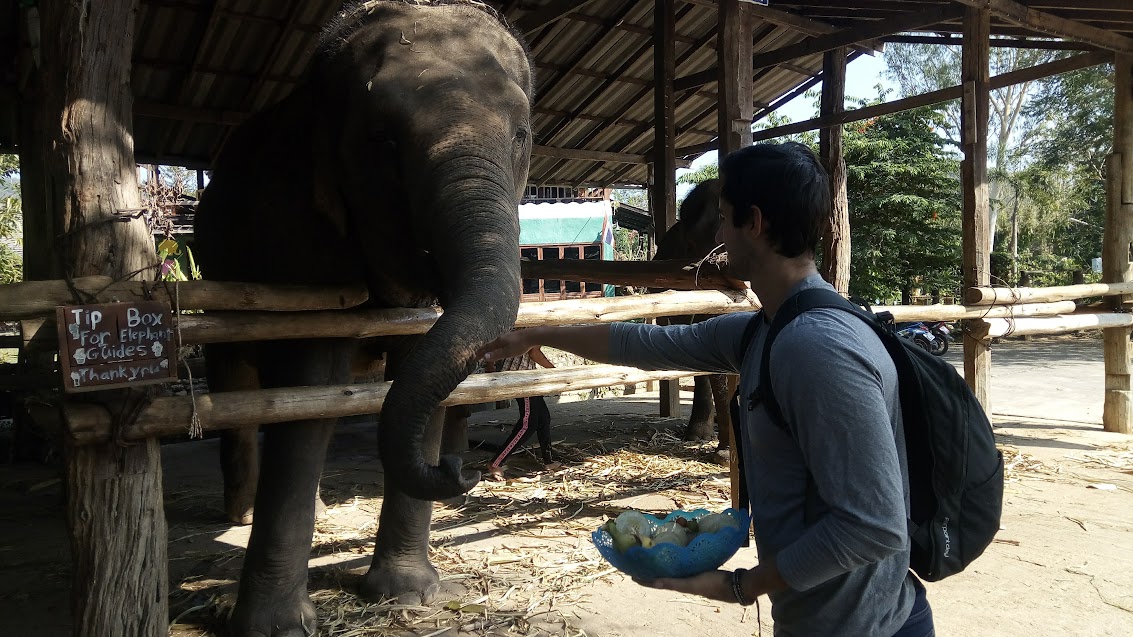 Lastly, on the way back from the Elephants to our place there was an attraction called “The White Buddha.” Basically its a giant white buddha on a hill. With one million stairs to the top (or at least it felt like it…). 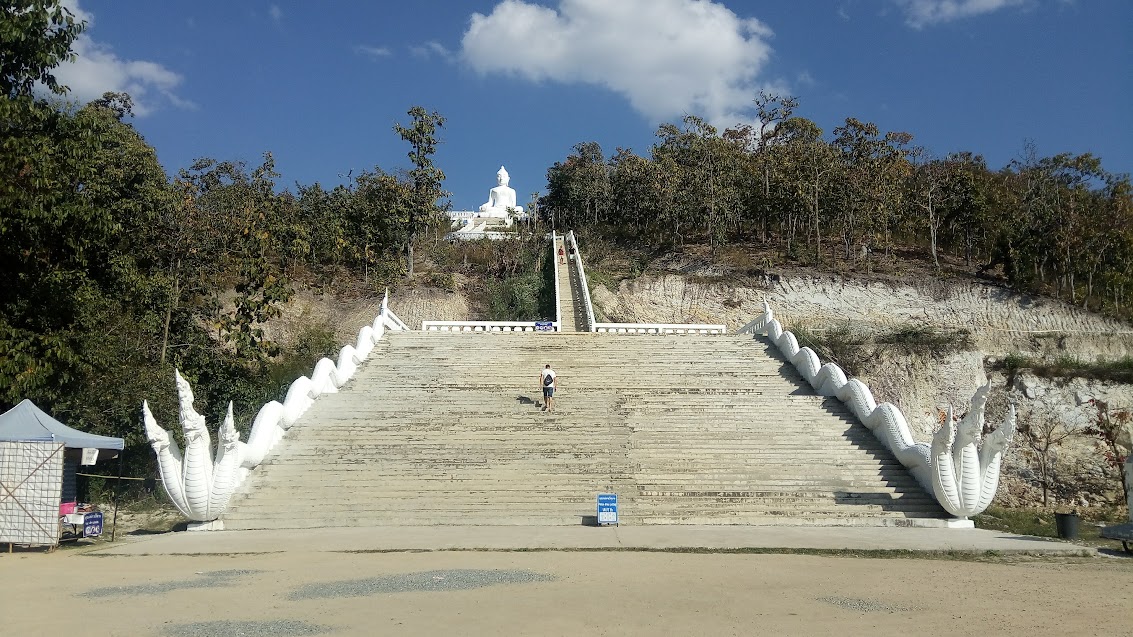 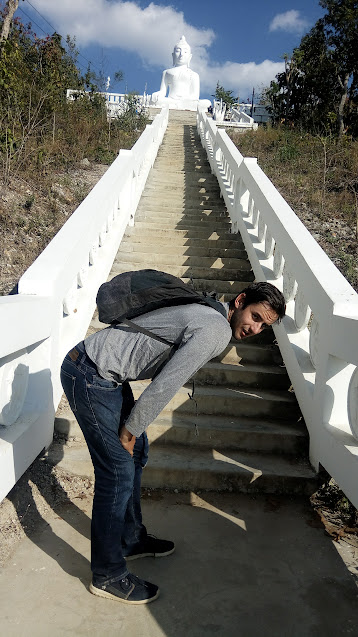 This was how Mitch felt once we reached the top. 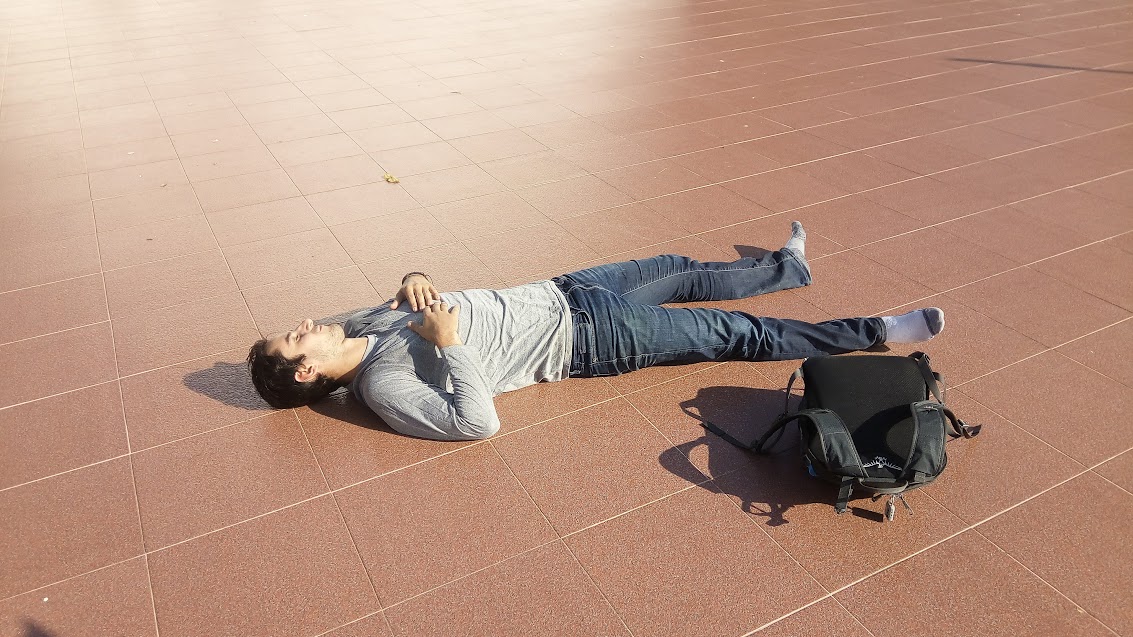 But it was again, a beautiful view and a nice place to sit in the shade and relax for a little bit.

This is how large the buddha is. 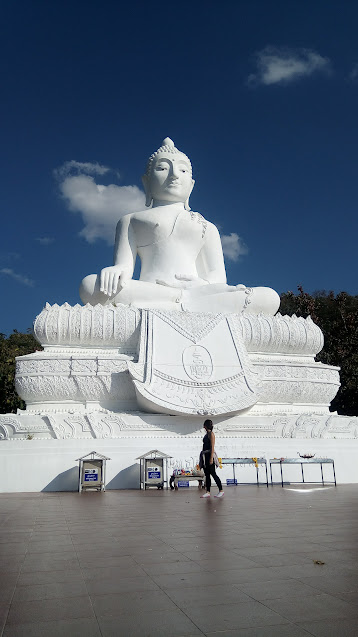 Finally we headed back for drinks with new found friends around the campfire and again, another night of walking the night market. 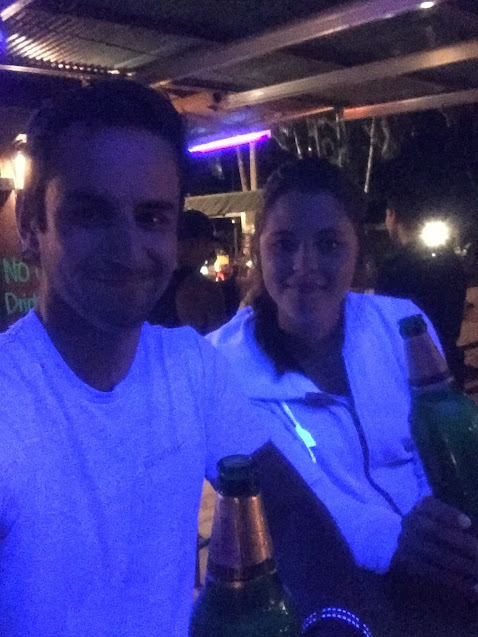 So, Pai has a river that runs through the town. We read about river tubing online, found some friends who were staying at the same place as us who wanted to go with us and for $10 CAD we all grabbed a tube and floated down the river with beers in hand. 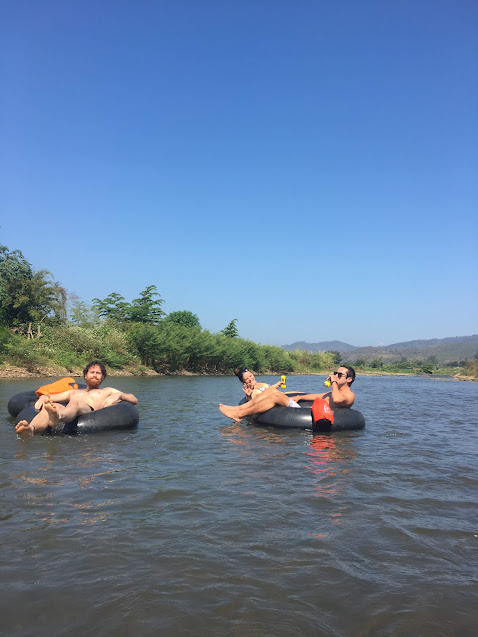 Of course no worries, we went through a company that took us to the drop off point, showed us where we’d end up and picked us up from there too. Our driver even stopped at a convenience store to encourage us to buy beer for the ride before he dropped us off. Fortunately we were smart enough to already have bought beer and not waste time! 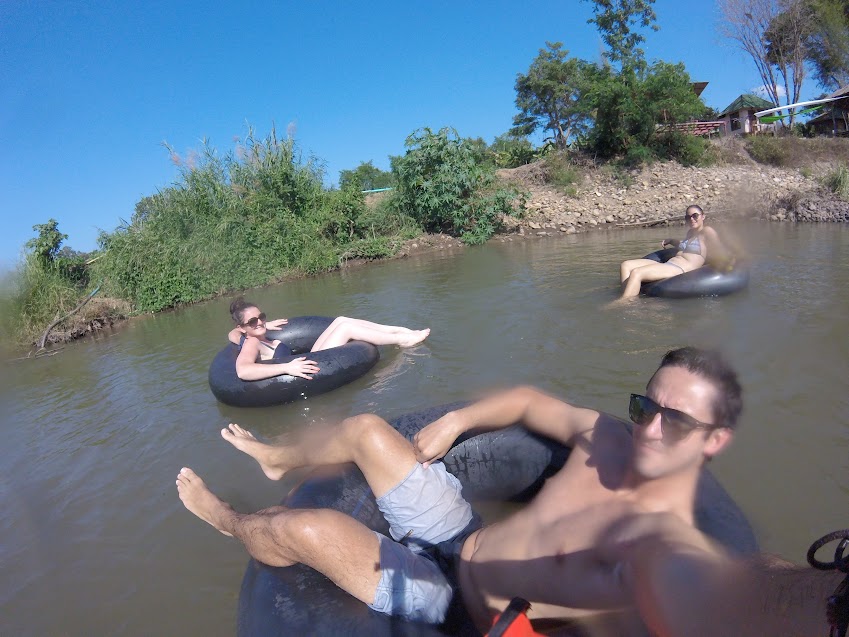 Some parts of the river were shallower than others, as its dry season and we had to scoot our butts over a few rocks, but it actually made it more fun, seeing everyone struggling in different ways. And other parts the water was rushing over big rocks which also made it fun. The entire time though the water was never too deep for us to touch the bottom so it was really nice. 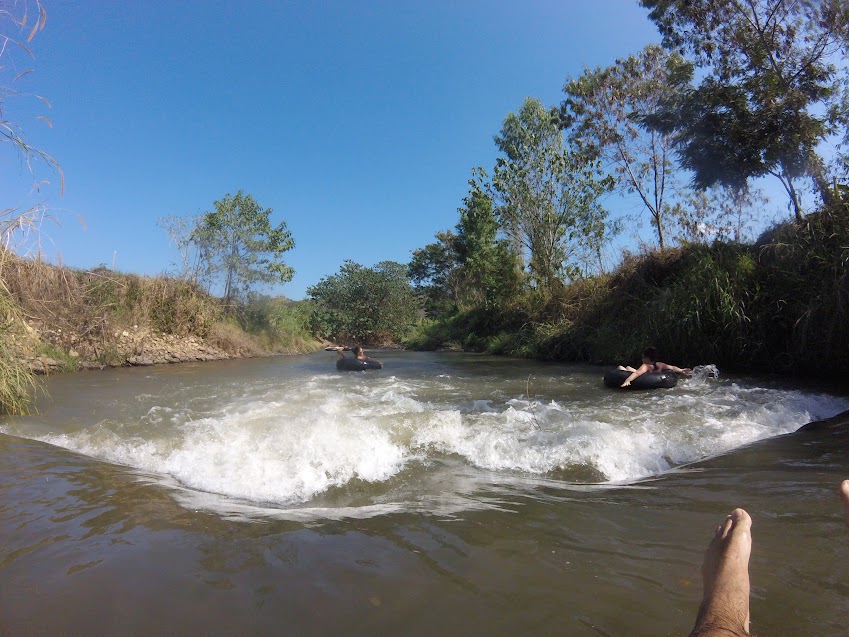 The next day our plan was to see the two main waterfalls around Pai. Our friend we met at the place we were staying, Nicole, decided to come with us as well. Funny story actually, we met her originally on our bus from Siem Reap, Cambodia to Bangkok, Thailand. Then again in Chiang Mai, then finally actually got to know her when we saw here sitting around the campfire of the place we were staying in Pai.

The first waterfall we visited was called Pom Bak waterfall, and it was this hidden away waterfall that you could only see if you took your shoes and socks off and waded through knee length freezing cold water. 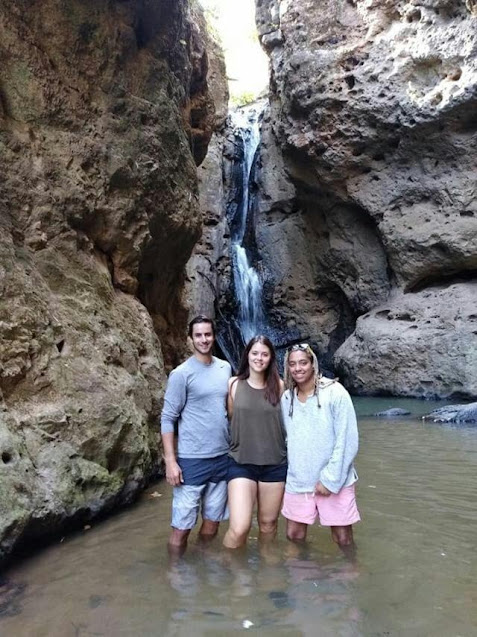 After seeing a few other people jump in the water and climb on the rocks near the waterfall, Mitch and I decided to be brave and do that as well. It was some of the coldest water I’ve ever experienced, but at least we can say we swam in a waterfall, if, only briefly. 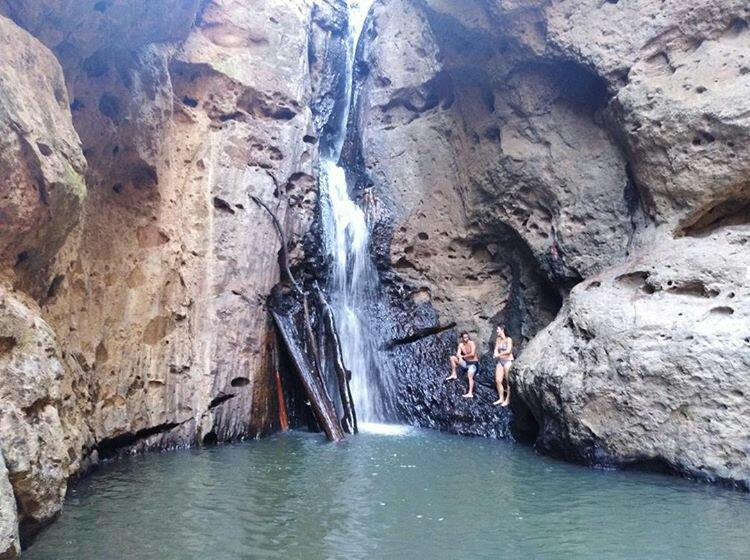 Then, a little ways up the road from this waterfall was this long bamboo walking bridge. It looked out over rice fields where there were water buffalo grazing. Seeing as it was dry season the rice fields didn’t contain rice because they need water to grow but it was still cool to walk along. 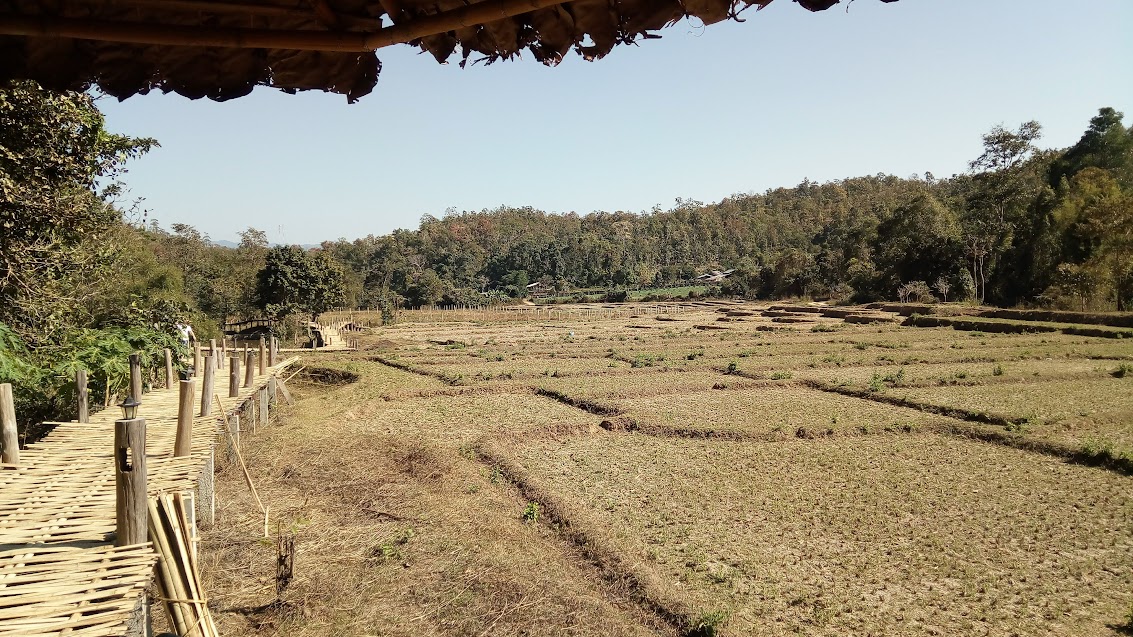 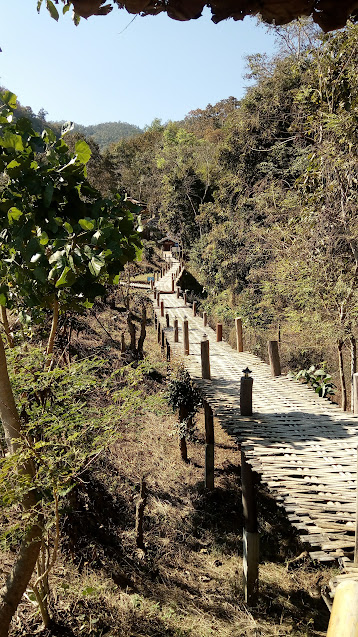 Finally, we headed to the second waterfall Mor Paeng. This waterfall you could actually walk up the rocks almost to the top and sit up there. We decided to do this for a bit and just enjoy the scenery. There were people swimming in this waterfall too but we didn’t join them as one ice cold bath per day was enough for us.

This second waterfall ended up being located near a little village that people call “China town” so we decided to check it out. Essentially it was a little re-creation of China and part of the great wall of China so we walked around for a bit. There are a large amount of Chinese tourists that tour Thailand so we assume its actually pretty busy during the day with large tour buses of those tourists – however, we were there at around 5pm and everything was closing up for the day. 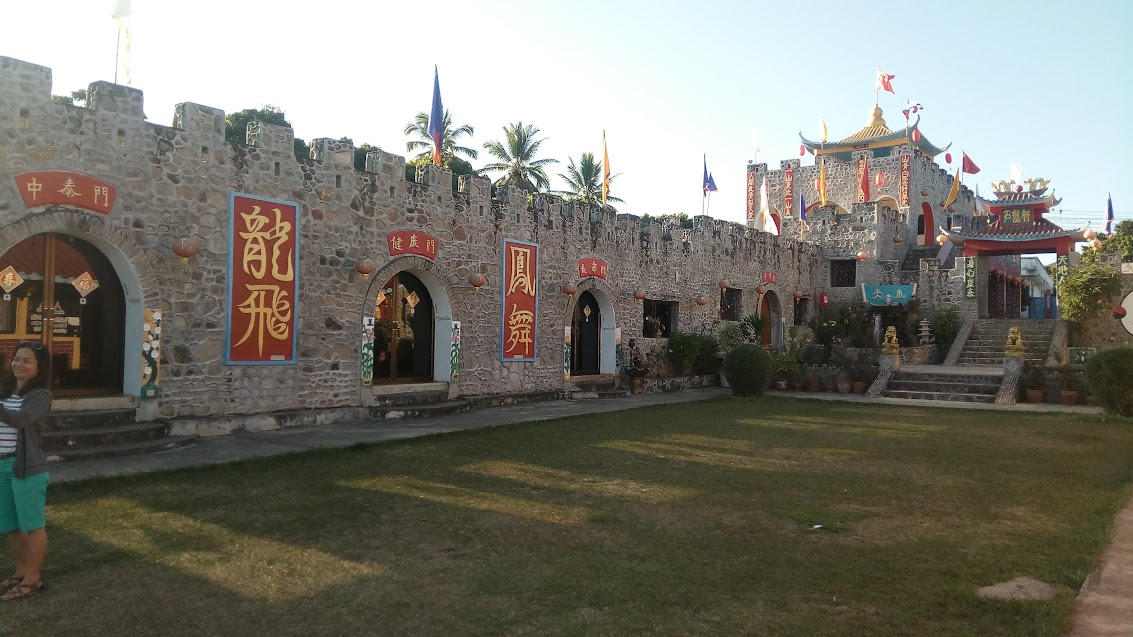 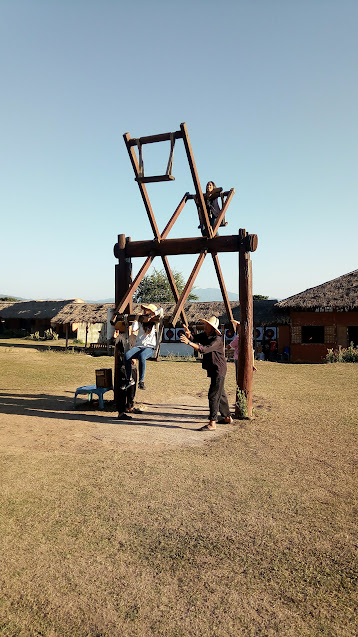 Then we headed back and picked up some food from that street market again for supper.

The remaining days we just spent relaxing and hanging out in the town itself. It’s very westernized, lots of little cafes, coffee shops and restaurants. But, its westernized in a relaxed fashion. No one is pushing anything in your faces, there aren’t tours to get scammed on or anything, its basically just a little hippie town where backpackers come and end up staying for too long.

Then after 6 days, we decided to head on to our next destination. We were sad to go though because we really did love Pai and we met so many people there which just made it 10 times better.