We were lucky enough to have Marci, Garrett and Will join us for our Vietnam adventure! For those of you that don’t know, Marci is my sister, Garrett her boyfriend (and our friend), and Will is our friend. They all took 2 weeks off work and hopped on a plane to join us in Ho Chi Minh City (formerly Saigon).

Wandering on Our Own

Mitch and I had actually arrived in Ho Chi Minh City (HCMC) 5 days prior to them joining us, and had a few days to ourselves to figure out the city. This was our first venture into Vietnam as well.

Our first noteworthy adventure was the War Remnants Museum. 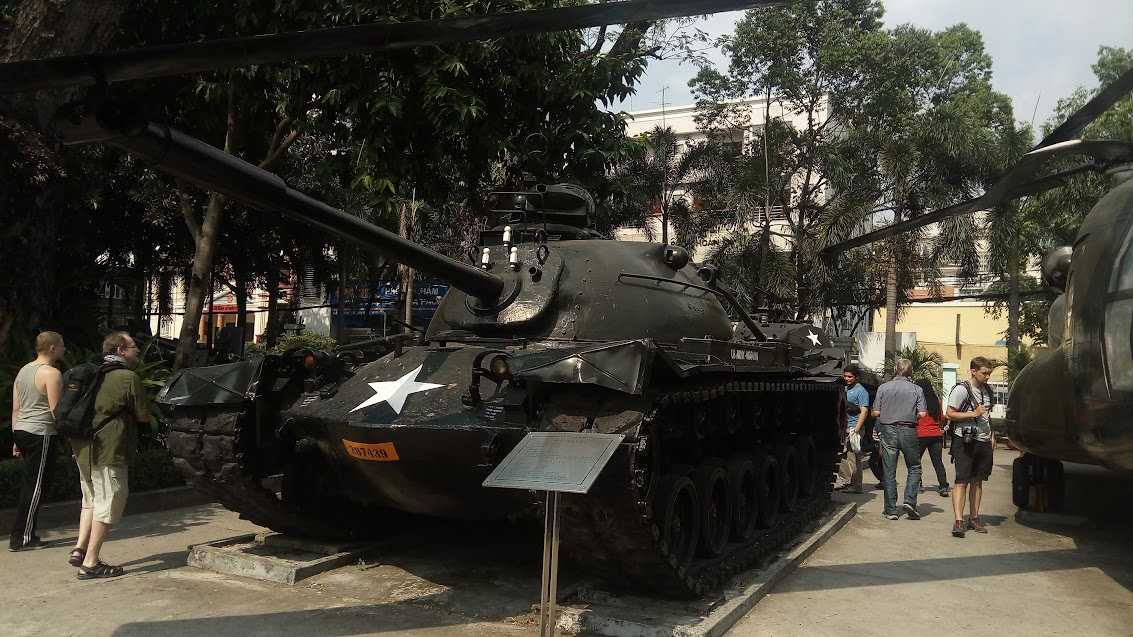 We spent a few hours here for around $2 CAD learning about the Vietnam war from Vietnam’s side of it. They actually call it the American War there. It was super interesting hearing about the war from the other side of story.

Side note: Surprisingly enough, they actually have a really mature attitude about the war all over Vietnam, not just in the south (where the american’s had a base and following). Their attitude is pretty much “Hey, we won, no big deal.” Seeing as we could easily be mistaken for Americans, we never had any issue with them treating us in any unfavourable ways. Actually many of our tour guides said they guide a lot of tours for American army vets coming back to see the country now, and that a lot of them actually own houses in Vietnam.

Anyways though, it was a super interesting and informational museum and we’d highly recommend going there if you are every in HCMC.

Another day we decided to check out the Notre Dame Cathedral in the city centre. Mitch even got asked to take a picture with an Asian couples’ baby. We did some research afterwards and found out this is actually a common thing. For some reason they like to have photos of their kids with foreigners. We aren’t sure if they were Vietnamese tourists, or if they were tourists from another Asian country though. 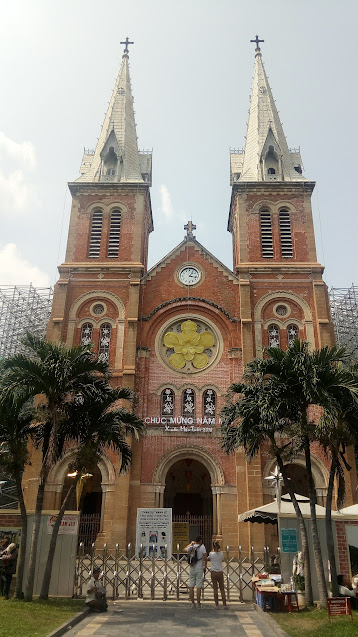 From there, we wandered down and drank coffee on “Dong Khoi” street, which is the main street that American Soldiers liked to hang out on during the war to buy things like cigarettes, alcohol and even women. It was also the first street that the French built up when they first colonized the city, prior to the Vietnam War. 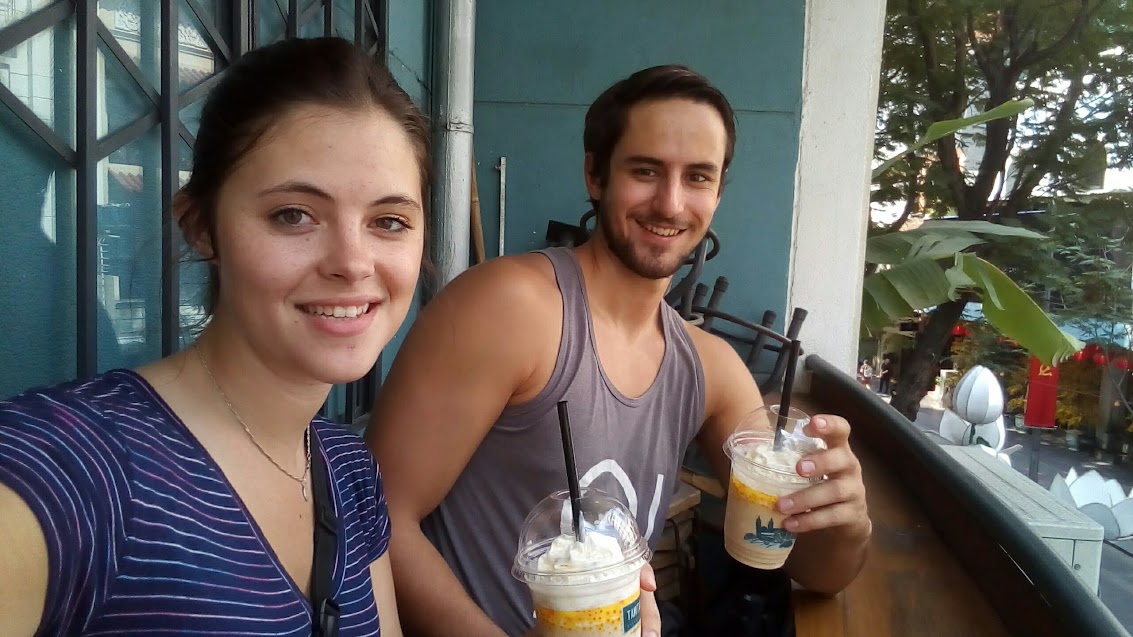 Finally the day came when we got to go pick our friends up from the airport! 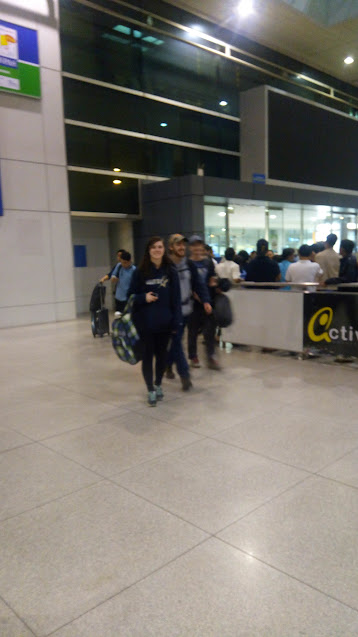 They arrived super early in the morning (2am), so our first order of business was giving them a Vietnamese beer at the hotel then letting them get to bed to try to get rid of the Jet Lag that was bound to set in.

The next morning we all went for breakfast at a little Vietnamese Noodle bowl place Mitch and I had found from reviews on the internet and enjoyed Bun Thit Nuong (Vietnamese noodle bowl with pork and spring rolls).

Then we signed up for an afternoon tour to the Cu Chi Tunnels (ku-chi). These were underground tunnels dug by the Viet-Cong (communist supporters revolting against the democrats and Americans in the south). The Viet-Cong lived and hid in these tunnels while waging guerrilla warfare against the Americans and democratic south in the Vietnam War. They would tunnel under american base camps, pop up and take out their soldiers, then disappear, before the Americans could even tell where the shots were coming from. The tunnel network at the time was around 250 km total. They even had sleeping bunkers, hospital stations, cooking stations, etc down there. The Americans never were able to defeat the Viet-Cong and get them out of these tunnels.

Our guide for this tour was actually a man who fought with the Americans in the war. He said he was 72 years old, and he’s missing his pointer finger on his right hand. According to him, he cut it off himself, because when they lost the war and the Communists finally rolled into Saigon, he could say, yes, he did work for the Americans- but, that he was just communications because he couldn’t shoot a gun – due to him having no gun trigger finger.

We also actually got to crawl through a small 250-500 m section of underground tunnel as well. Of course i couldn’t take pictures in there cause it was dark though.

Overall it was a pretty cool tour. I personally wish we could have crawled though more tunnel sections and our guide was a little fast, but it was still definitely worth seeing!

Leaving Saigon & On to Mui Ne

The day after the Cu Chi tunnels, we hopped a 4.5 hour bus to a city called Mui Ne. It’s essentially a little beach town. We stayed in a hostel with a pool and just hung out and relaxed the first day. 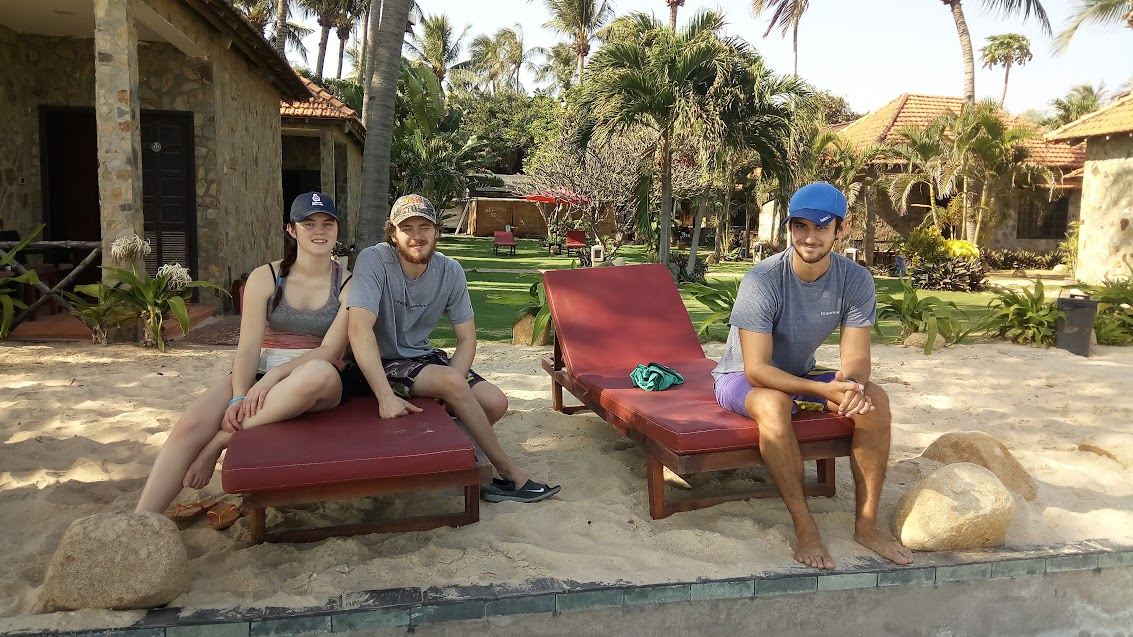 It was so windy on the beach that there were a lot of kite surfers out, that we decided to watch for about an hour.

We ended the night with a seafood dinner by the ocean! Mitch and I tried frog again, and let everyone else have some as well. It was soo delicious!

The next morning (after a few too many beers for Mitch, Will and myself) we woke up at the outrageous hour of 3:45am to do a sunrise sand dune tour.

Mui Ne has both white and red sand dunes near the town/city area and apparently its a thing to see either the sunrise or sunset on them.

Then after the sunrise, there were locals selling sleds to slide down the sand dunes for $2 CAD. Marci and I both decided to give it a try and it was pretty fun!

Afterwards the tour stopped us in a little fishing village where we could see the locals collecting crabs and other sea things for sale, as well as buying them. 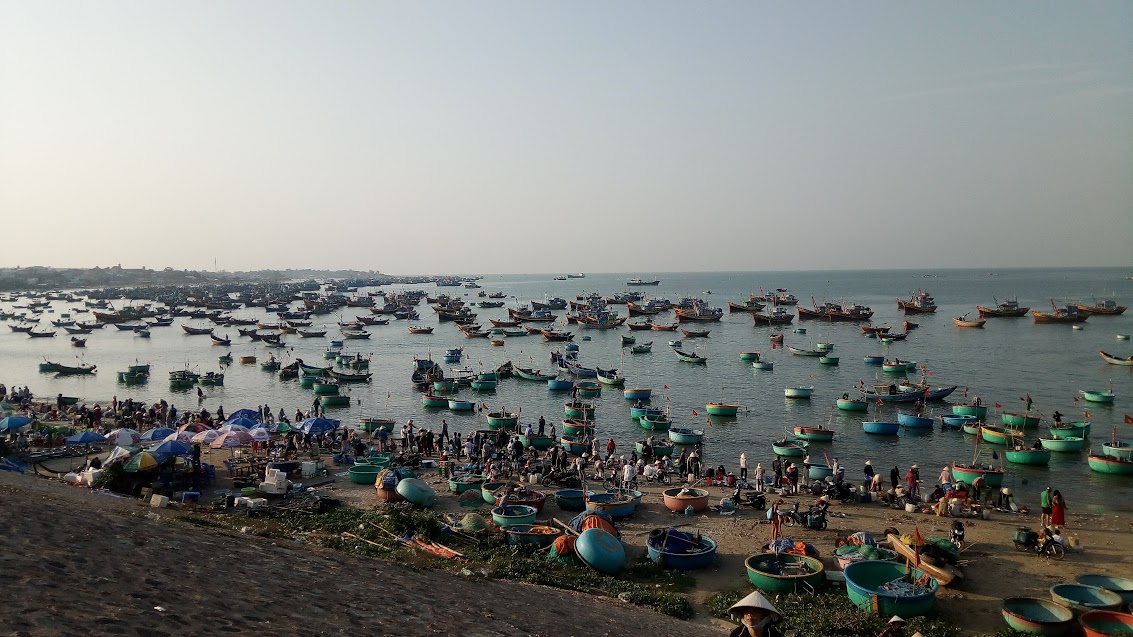 Last stop on the tour they took us to this place called a “Fairy Stream Walk.” Essentially we walked in bare feet down this little stream of water in the midst of these canyon type walls. 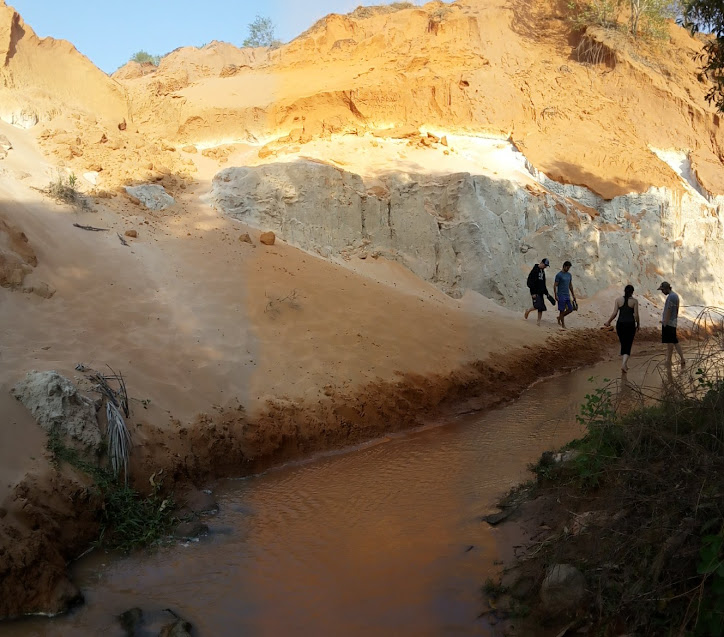 It was nice and relaxing until we got to the end and realized just beyond where you walk was a huge deep pond that smelled of sewer and there was water leaking into the stream. We realized we were probably walking in not just mountain water, but most likely very little mountain water, mixed with a lot of sewage water. Oh well, still a fun experience! 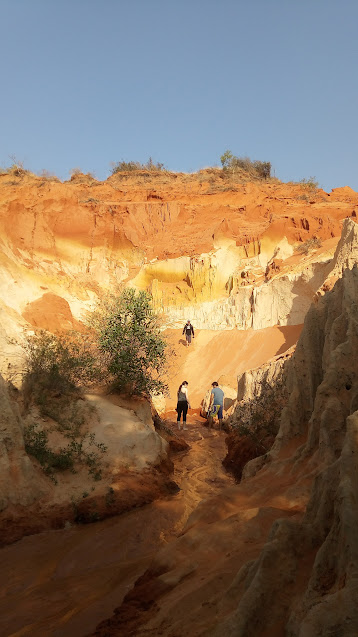 Now onto Nha Trang for a Beach Day!

After we did the morning tour in Mui Ne, we relaxed by the pool drinking cheap beer ($0.75-$1 CAD) until 1pm when we got onto a bus headed to Nha Trang. The bus was super delayed and we actually ended up sitting around for a while, but we ended up getting there finally at 6:30pm (even though it should have been 5:00pm).

We stayed in another hostel here as well. After getting checked in, we found a little restaurant near our place for supper. Will and Mitch tried crocodile and actually let all of us try it as well. We met a guide who described it perfectly as “Taste of chicken with the texture of fish.” It was good! Sorry no pictures for this though!

Then the next day we went to the beach all day. Paid about $2 CAD for a sun chair under an umbrella, each, and drank beers for $1 CAD all day. (Sorry again no pictures – I was too preoccupied with beers in my hand I guess).

After this supper we headed to the airport to get on our late night flight to Hanoi (capital of Vietnam). You can read about our adventures there in the next blog! 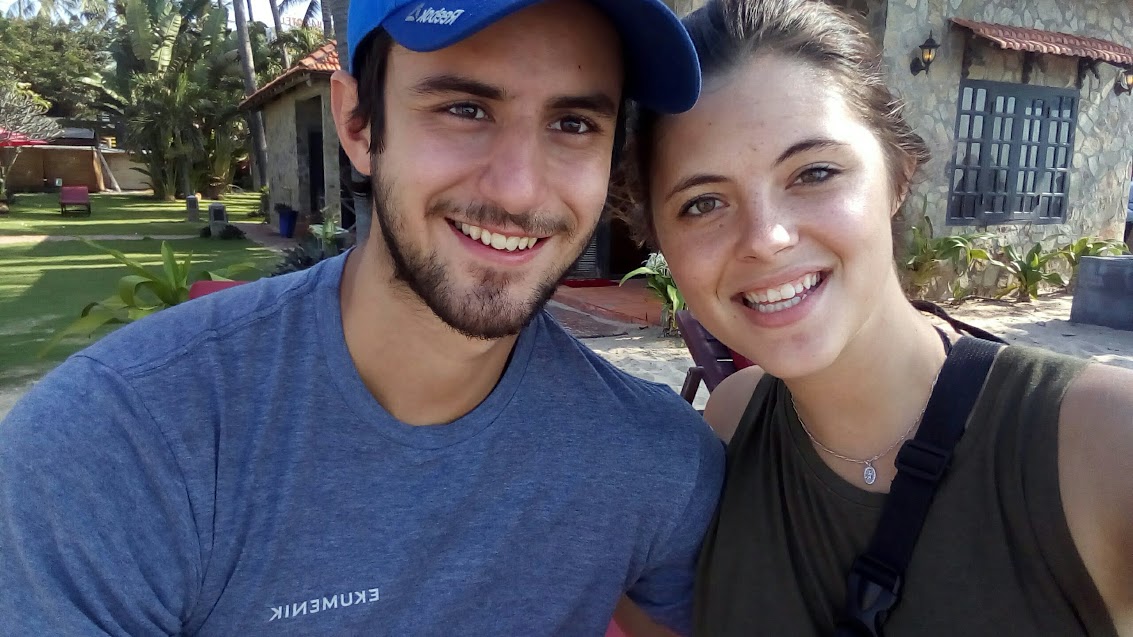