After the five of us (Myself, Mitch, Marci, Garrett and Will), hopped on a plane in Nha Trang, we arrived at Hanoi at 1:30am in the morning. It was much cooler in Hanoi. Sweater and pants weather rather than bathing suit on the beach weather.

The next day we decided to explore the city a little bit. There is a lake in the middle of the city with a bridge on it, which is where we took this photo. 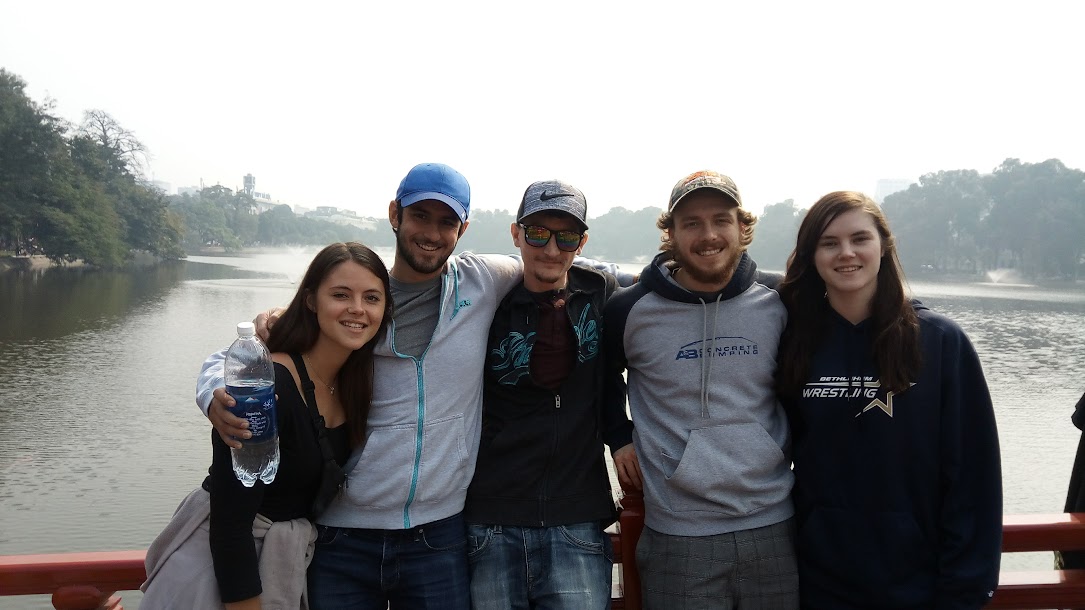 Hanoi is crazier than Ho Chi Minh was for traffic, because even though there were less people (Hanoi 9 million / Ho Chi Minh 10 million) the traffic seemed to have less rules and regulations about it.

We ended up finding a Street food tour online that was done by students for free (other than the cost of our food) and arranged for a tour guide to take us on a tour our first night there. Her name was Ly and she took us to 4 different vietnamese restaurants and told us what to order, and explained certain popular foods.

This was our favourite: Bun Cha (essentially make your own Vietnamese noodle bowl). 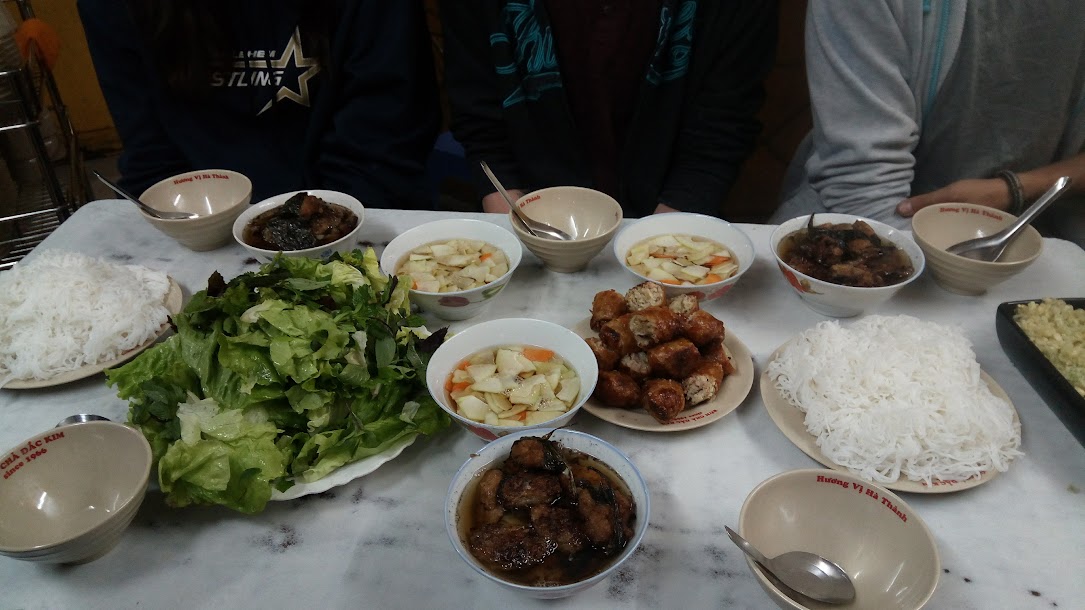 After our tour ended (with ice cream of course) we walked by the main little lake in the center of the city. On weekend nights the street surrounding the lake turns into a walking street (they block off road traffic). We saw many groups of people playing shuttlecock. This is something Mitch and I have seen people playing all across Asia – it is essentially hackie sack with a badminton birdie looking object instead of a hackie sack. We decided to buy one that was being sold on the street for $2 CAD and give it a try. Its safe to say we all need to practice a bit more (especially me). 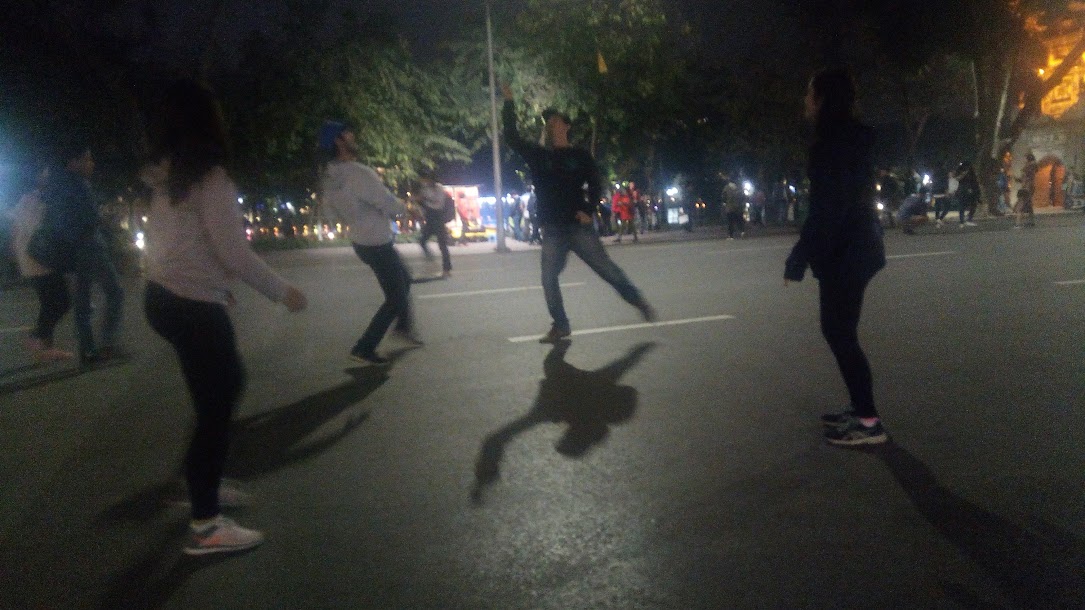 The next day, Marci and I hopped in a taxi out to a small village where I had arranged a “vietnamese cooking class” for us. It was my birthday gift to her, and the guys weren’t interested in joining (although they were interested in eating the food we made).

We met with a lady named Many. She was in her late 20’s and she lived in the village with her husband and two daughters.

She started by giving us a tour of the local market, telling us all about how they come to sell fresh goods each morning at 5 or 6 am. They keep the meat fresh by not killing it until someones buying it, as there are no refrigeration methods at the market. We also passed by men drinking pig’s blood soup and rice wine. They stopped us to talk (as they knew our tour guide) and they even offered Marci and I some rice wine.

Then Many took us through the local farms/gardens. This village makes its living by farming and gardening. Everyone has their own plots and they grow and sell different vegetables and plants. Our guide had 6 plots herself. 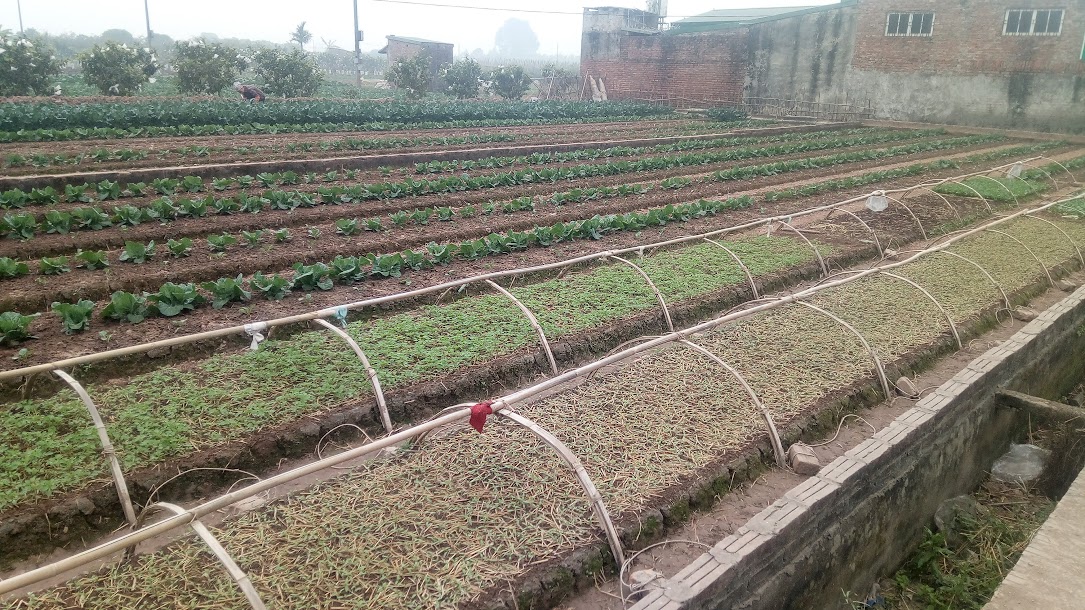 Then we got down to the good stuff. We went back to Many’s house and with her cooked 4 different dishes. Spring Rolls, Ground Pork in Betel Leaves, Green Mango Salad, and Lemongrass Chicken. So yes, we now know how to make spring rolls! 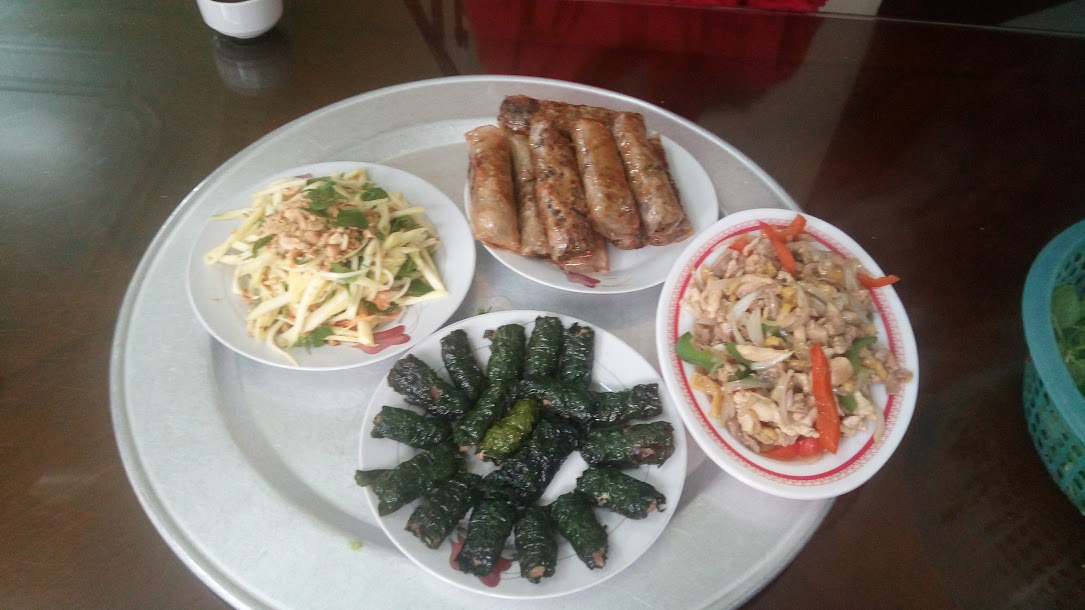 It was a great experience as we learned how to cook food, learned about rural Vietnamese life, and we got to her ask her all sorts of things about customs and opinions of Vietnamese people. After that, Marci and I returned to Hanoi to meet up with the guys who had passed the day by drinking beer for $0.75 CAD.

Sapa Trekking & Homestay with a Local

After joining in with the guys for a bit, we had to grab our bags and get on a night train to Sapa. Sapa is a place north of Vietnam in the mountains where they farm rice and have alot of hill tribes. We had booked a 2 day 1 night trekking tour in Sapa  the next day so we figured we’d save money by getting on train up to Sapa (8 hours) and sleep on the train.

We arrived in Sapa at around 7:00am. The office that we had booked the tour through had hot showers and a restaurant where we could eat while we waited for our tour to start (9:30am). Its worth noting that Sapa was much colder than Hanoi. We were told that sometimes it even snows in Sapa. Luckily we didn’t experience any snow, but there was a lot of fog, mist and gloomy overcast weather.

Finally we met our tour guide, Lu, at around 9:30 pm. He was to take us trekking around the Sapa area all day, then back to his place to stay the night in a nearby village, then trekking back to Sapa the next day.

We headed off first to a few waterfalls. We were driven to these locations and then walked around the waterfalls. 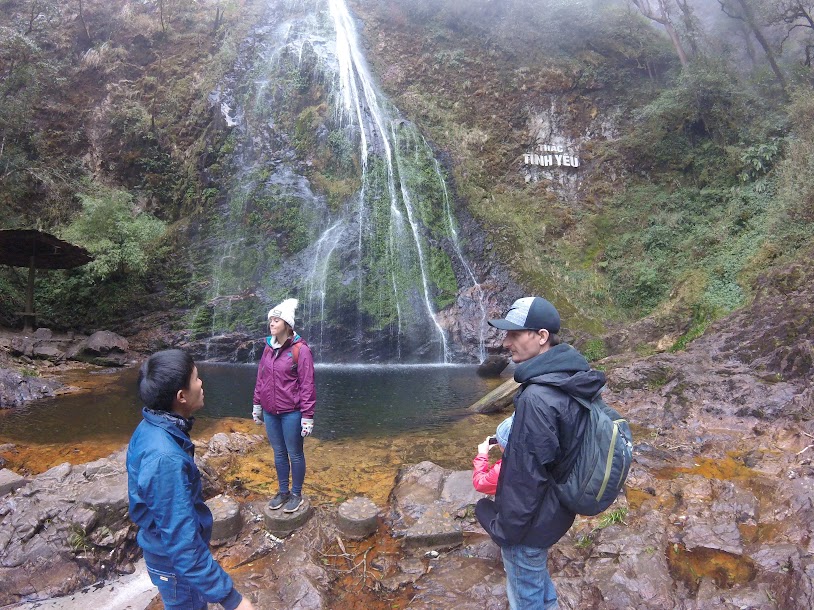 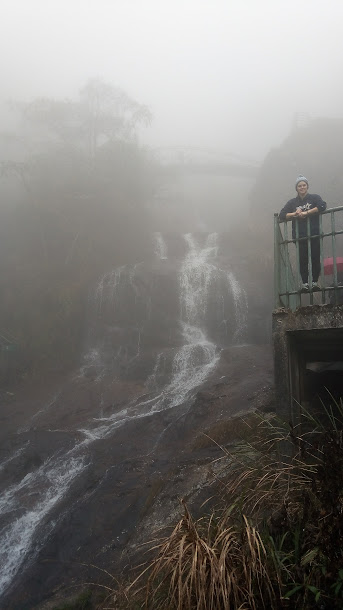 After the waterfalls we were taken to a drop off point where we started our trek. Now, in their summer season, this would have been a beautiful green walk of lush rice paddies, etc. However it was their off season, and on our first day it was very foggy/misty so our visibility was really poor, and what we could see was brown, not green. That being said, it was still a great walk and we got to ask Lu alot of different questions and joke around with him. He was 24 so he was around all of our ages. 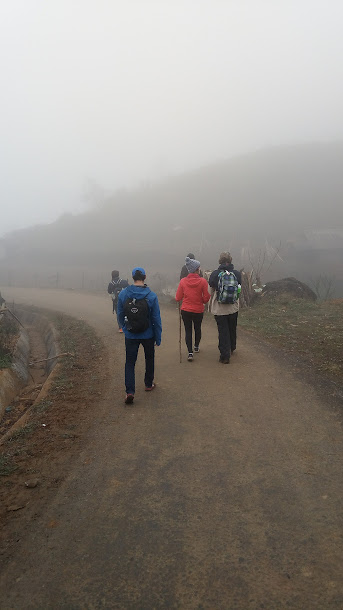 We stopped for lunch in this valley by a river. Lu made us sandwiches, and we sat and talked while we had our little picnic. And, being in the valley actually allowed for some visibility as well. 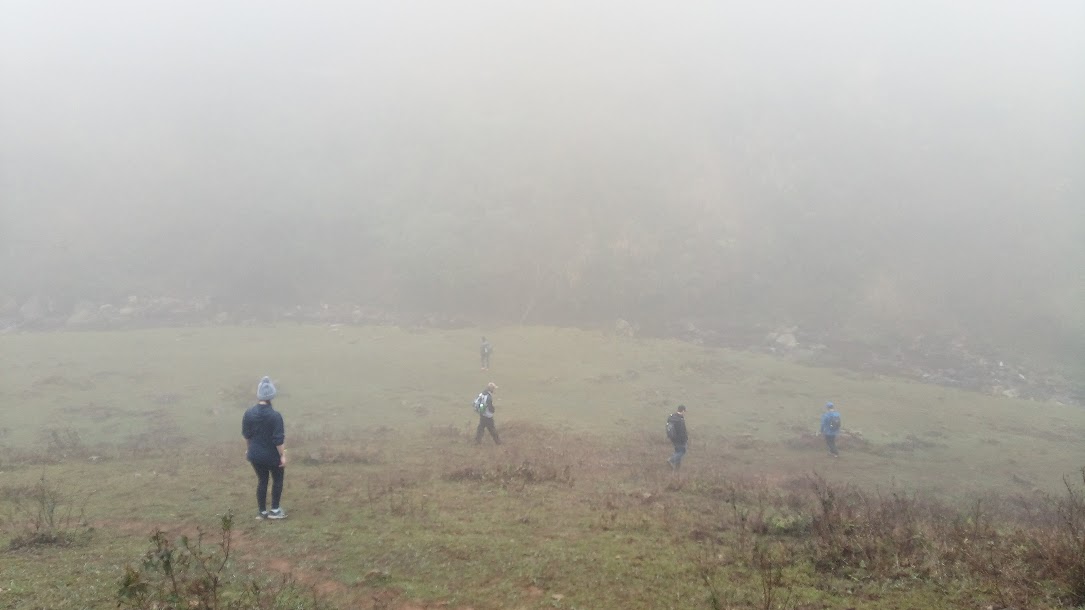 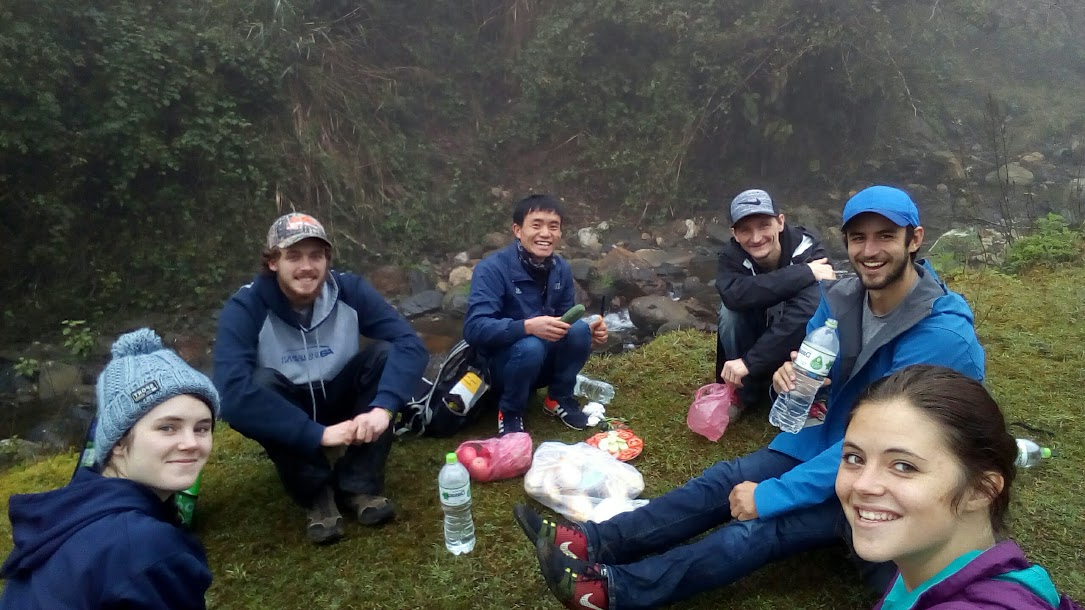 After lunch we continued on our walk for a few hours and finally arrived at Lu’s village of Cat Cat. We met his wife Mi and his son Phoung (2 yrs old). Then we sat by this little indoor fire place to warm up once we were in his home. 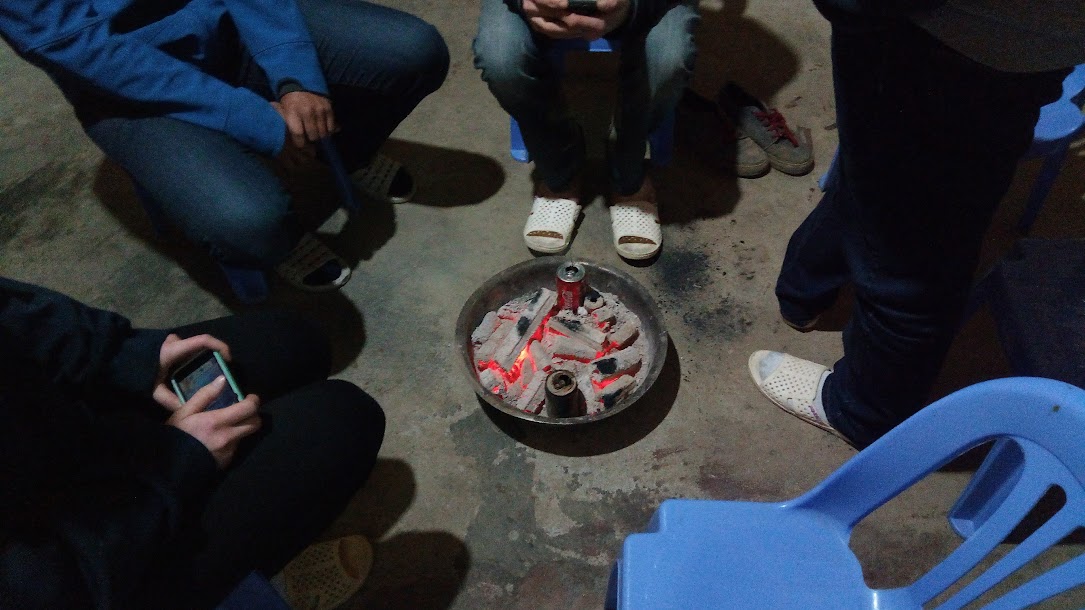 That night, his wife and him made us a huge supper that was very delicious. 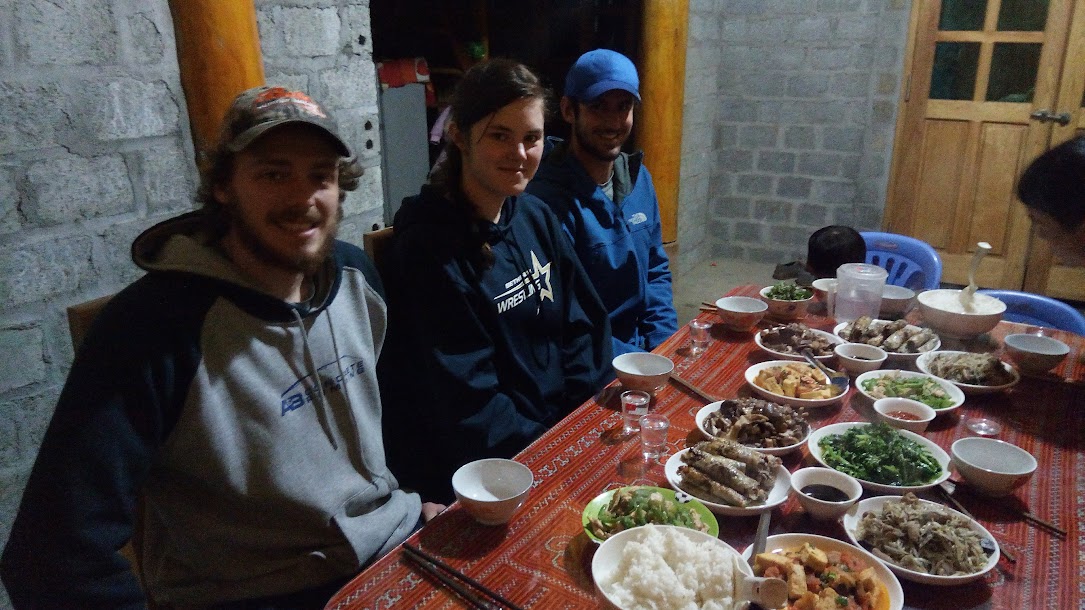 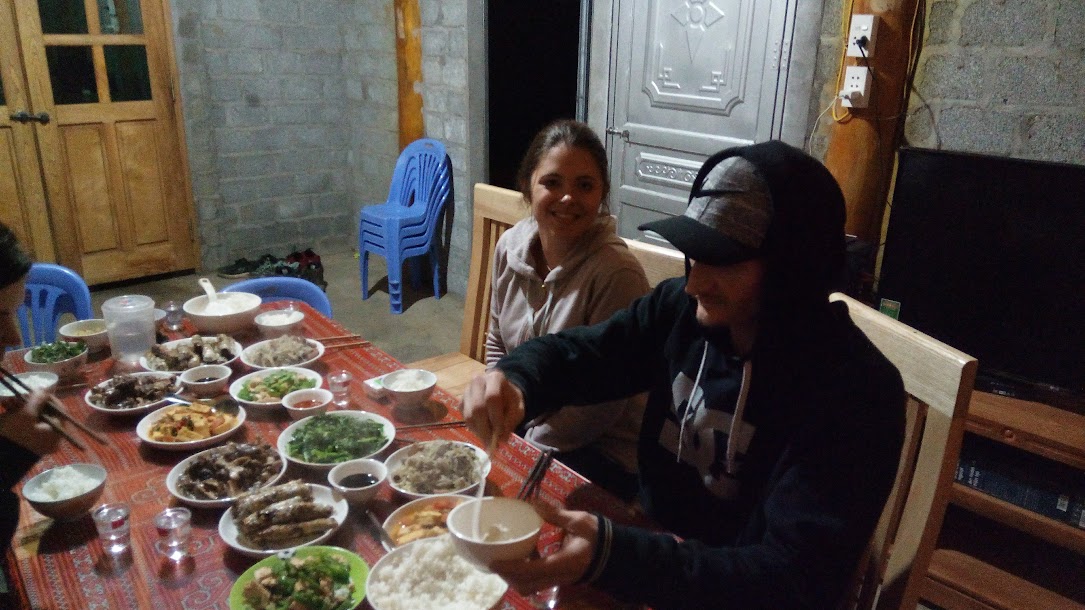 We had also spoken to Lu earlier and learned that the Vietnamese people like to eat duck eggs. But, they eat them when the duck embryo is further developed. He said, he and his son love them. Lu asked us if we wanted to try them for supper, and a few of us said we would try them if he made them. So, he made them.

Marci, Will and I all tried them. Surprisingly they don’t taste as bad as they look.. It really just tastes like you are eating meat. If you can get past the fact you saw yourself put a baby ducks head on your spoon. Then we proceeded to wash it down with lots and lots of rice wine that Lu had (his cousin makes it).

The next morning, after sleeping in a little bit, we awoke to a nice view from Lu’s house. We couldn’t see this view the day before due to poor visibility. 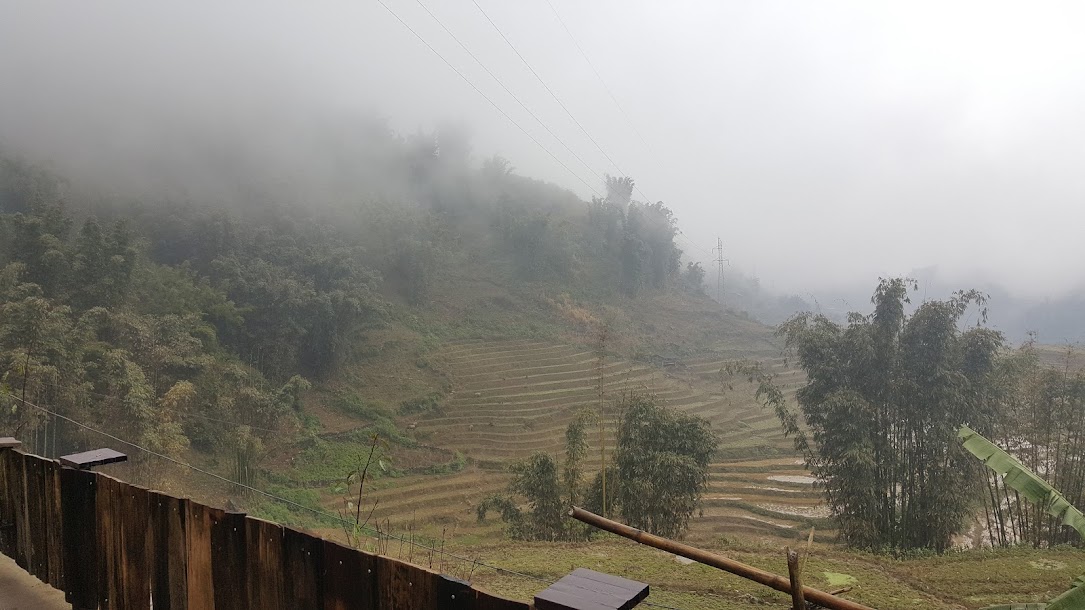 Our second day brought better visibility, but a lot more mud. The trek we took after breakfast at Lu’s house was super muddy. 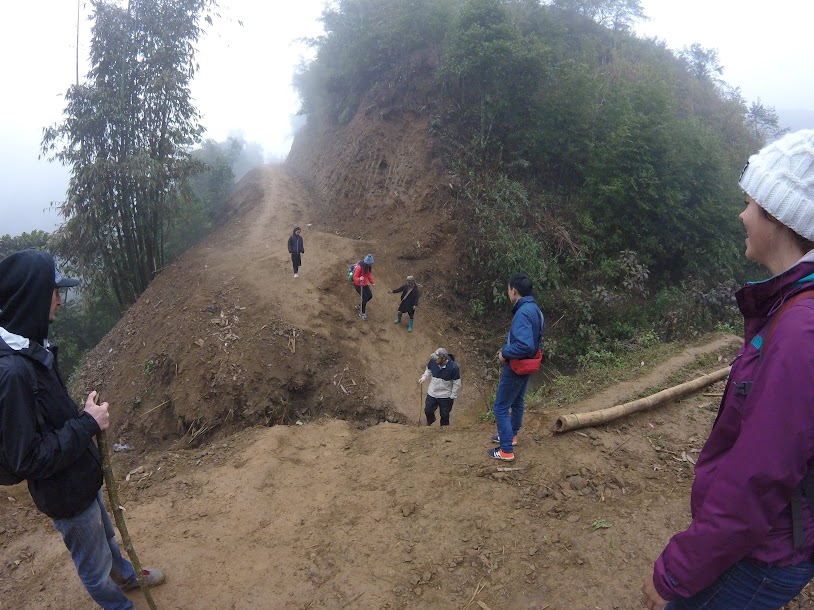 One of the local lady’s from the Hmong Tribe followed us down our trek and helped Marci and I a few times make it up a muddy path. Of course they always do this because they hope at the end of it that you may want to buy some of what they are selling (usually scarves, bags, etc). 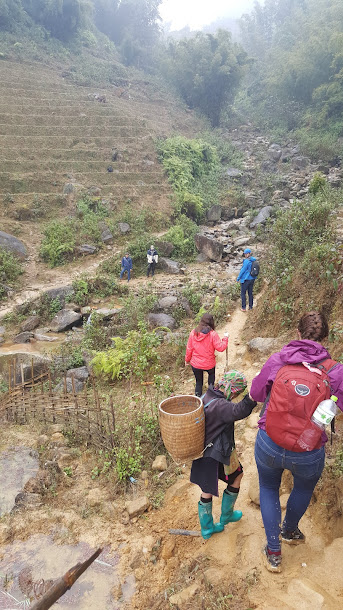 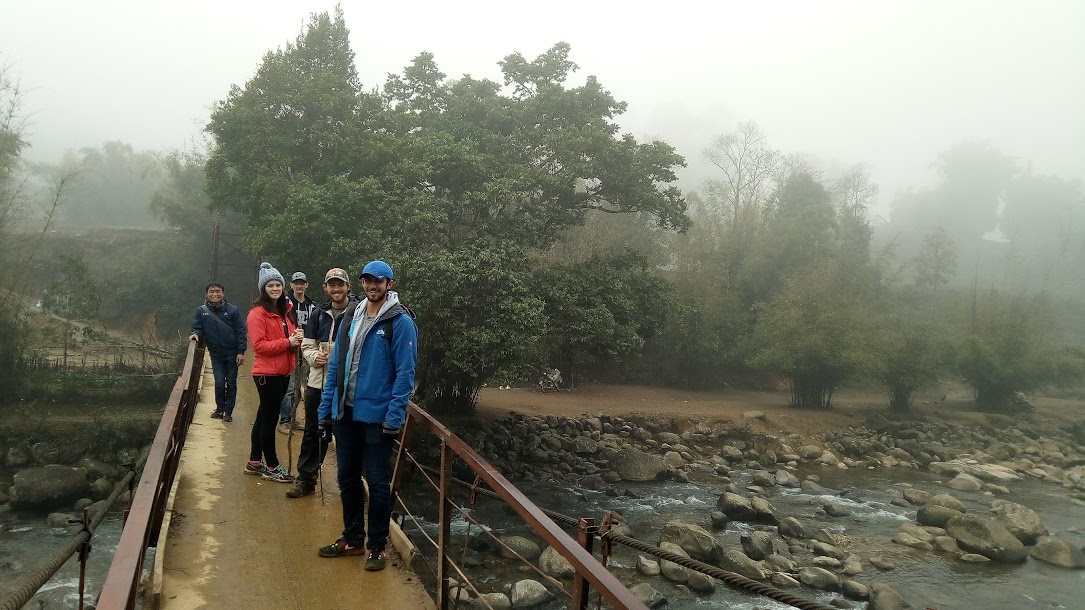 Finally we arrived at a local restaurant in one of the many small villages for lunch. We had a delicious lunch, accompanied by a cold beer (which was needed after the morning walk), and continued on our way for another hour or so.

After we reached our end point, we were picked up by a vehicle and driven back to the town of Sapa. There we said bye to Lu and waited for time to catch a bus to the train station to take our night train back to Hanoi. 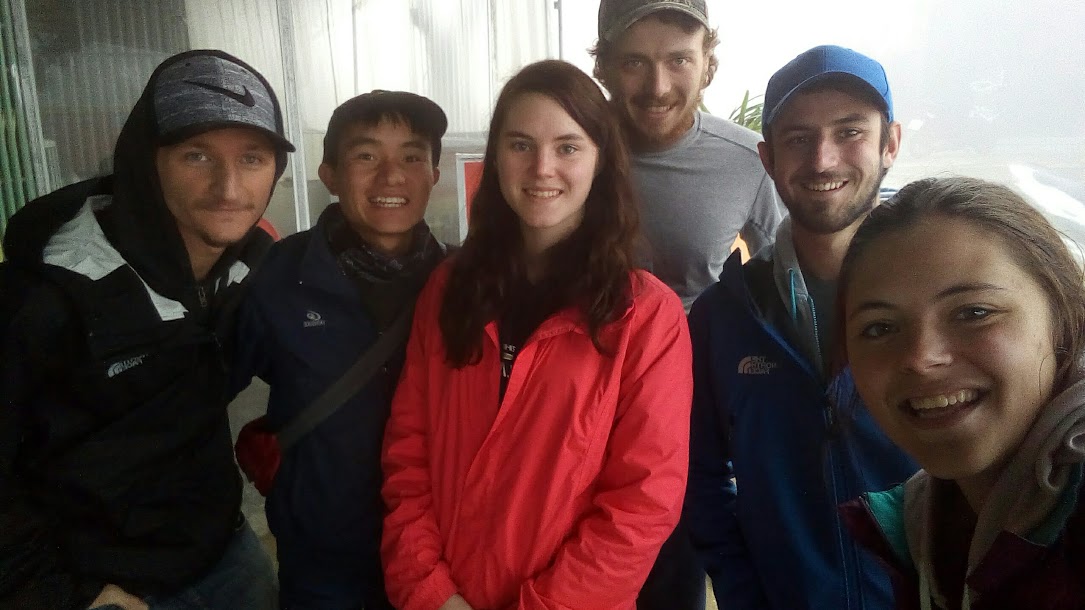 We bought some alcohol for the ride home and got a little buzzed in our cabin on the train before going to bed.

We all agreed that Sapa was one of the coolest experiences we had in Vietnam. Just getting to know someone local and sitting with them in their home (which he built himself), eating and drinking with them, it was an experience most tourists don’t get to have, and it was totally worth it.

Next Stop –> Back to Hanoi, Ninh Binh, and Ha Long Bay 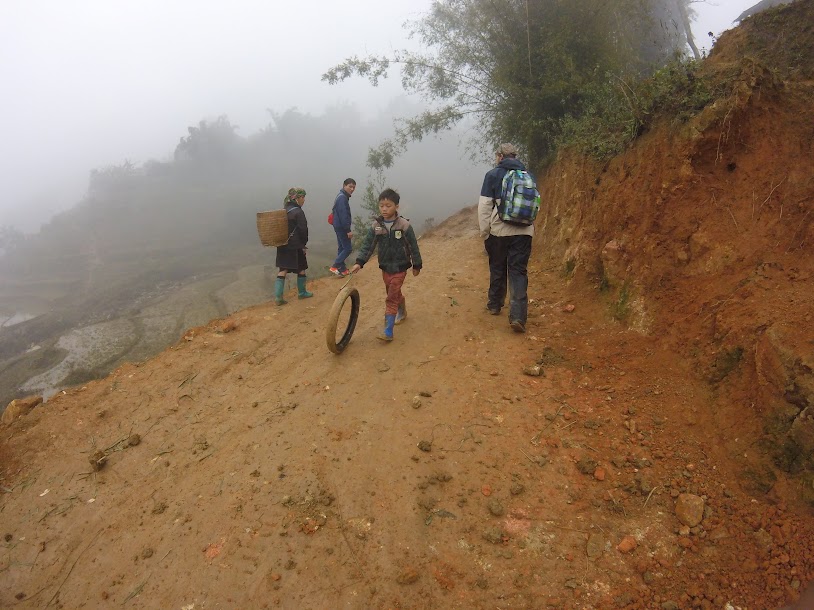