So, after we returned to Hanoi (capital city of Vietnam) from Sapa we checked into a 3 bedroom Air BnB we had found online. With a discount coupon and a lucky upgrade from the owner, we got a 3 bedroom 19 floor apartment looking out over the city of Hanoi for $55/night total (so with 5 of us that was $11/night each).

The first day back we all relaxed and had some naps, as we were still tired from our two day trekking adventure, and our train ride back where we did more drinking that sleeping on.

Luckily enough though, our apartment was located next to a main shopping mall complex so we actually found an arcade and played a few games including this deer hunter game. 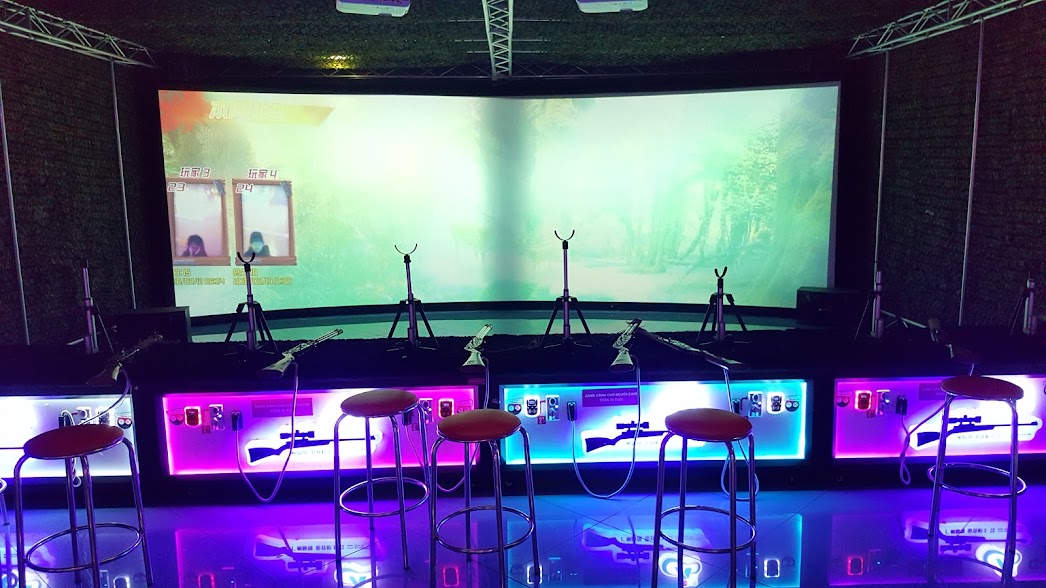 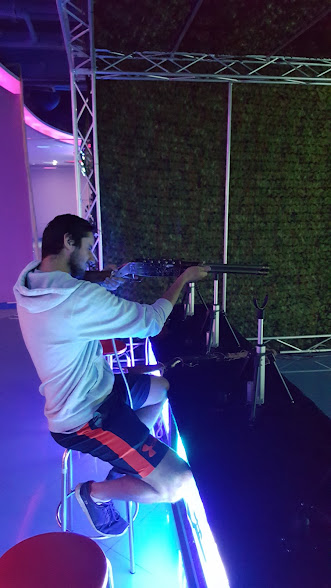 Then, in the evening we went to see the maze runner 3 for about $3-$4 CAD in a movie theatre in the mall too.

All in all it was a great relaxing day.

The following day we arranged a private tour to the area nearby a city called Ninh Binh called Trang Anh. We were taken on little river boats through a river and cave system that winds in and around limestone craigs. This area is called the “Halong Bay on Land” (if you don’t know what Halong Bay is – read on, as we visited it the following day). 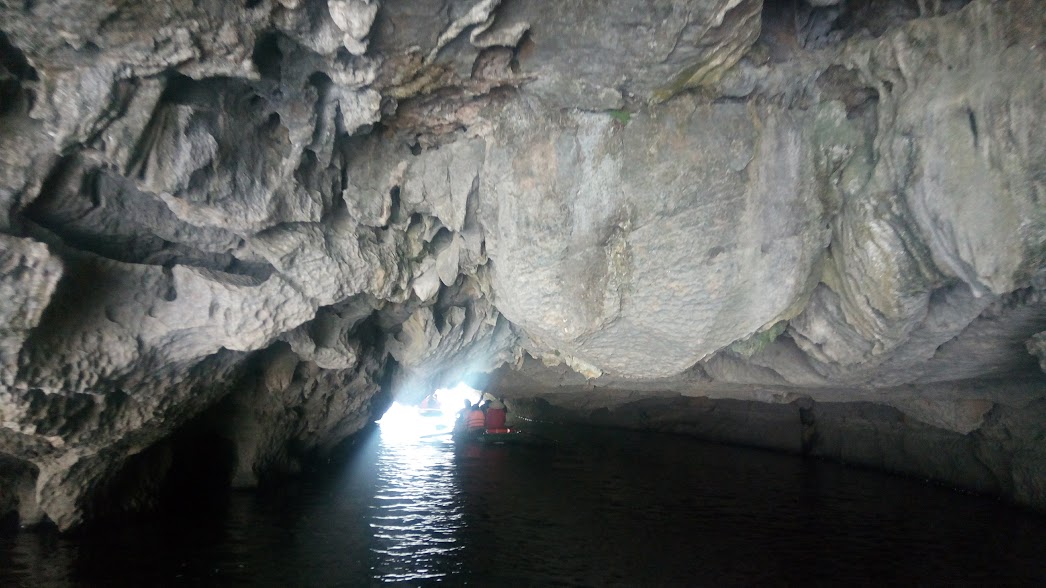 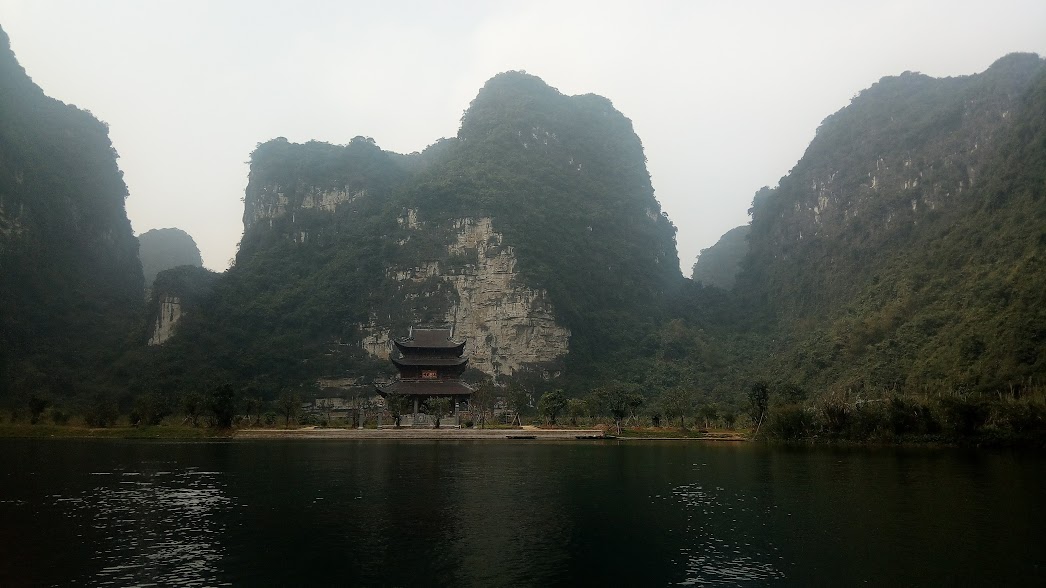 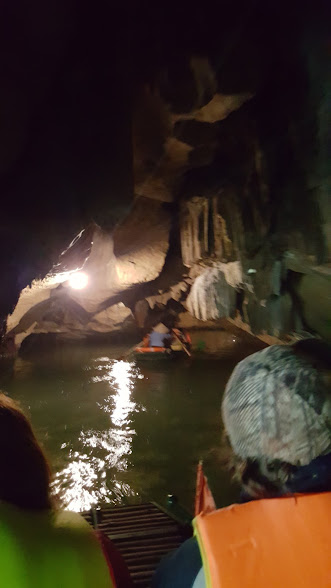 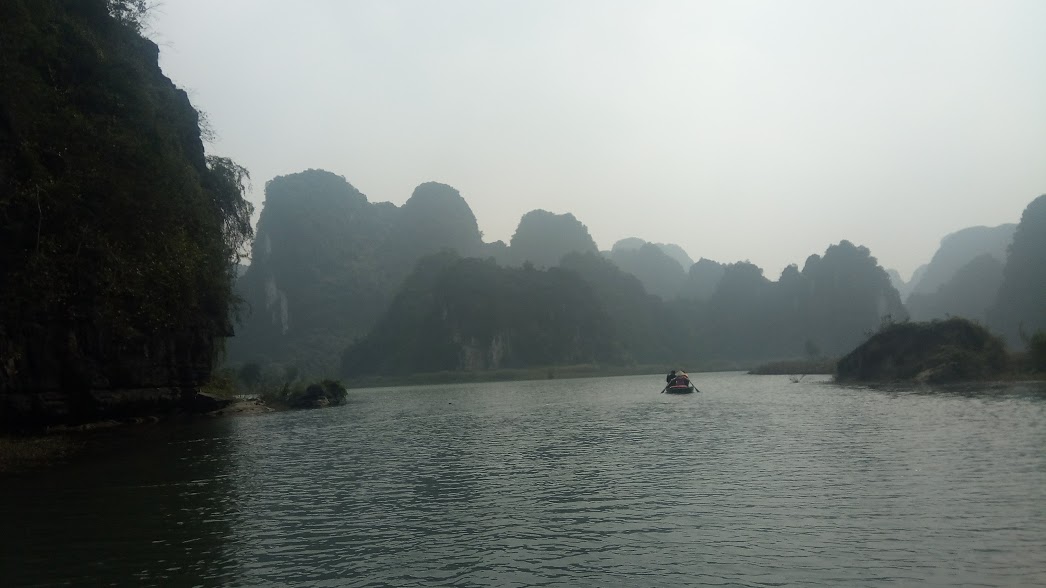 Actually, the new movie King Kong Skull Island was filmed in this area, and they even took us through the little fake village that they made for the movie. 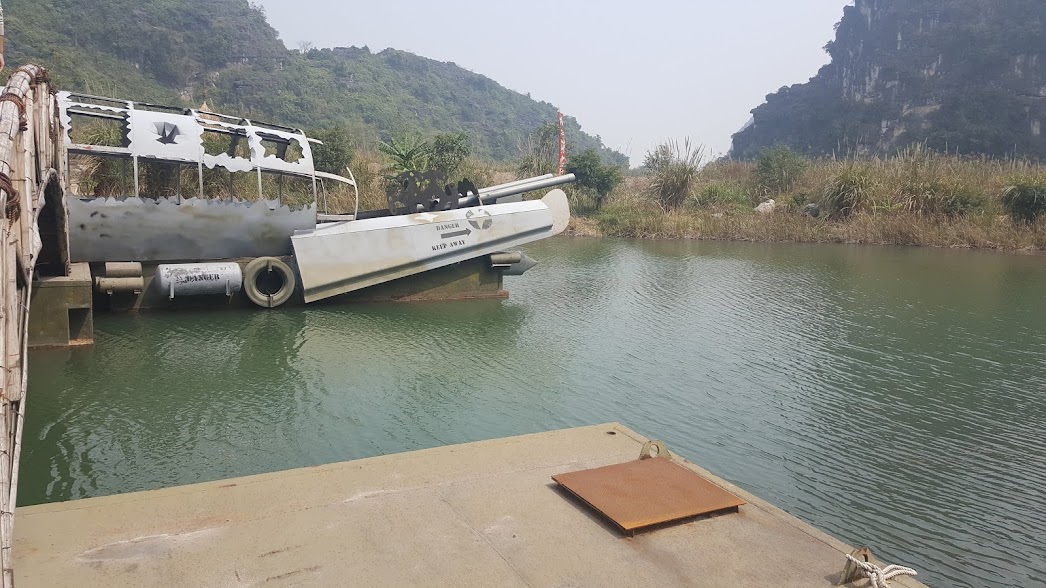 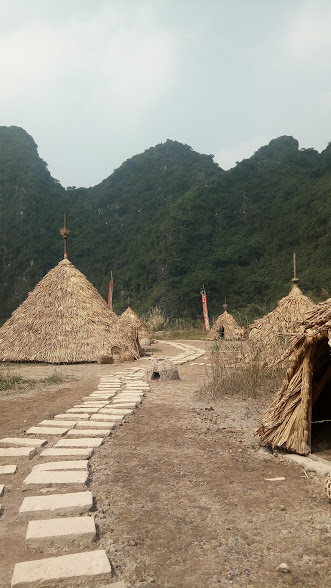 Then, we moved onto a different location, where we climbed 400-500 steps up a step stairway to get this beautiful view. 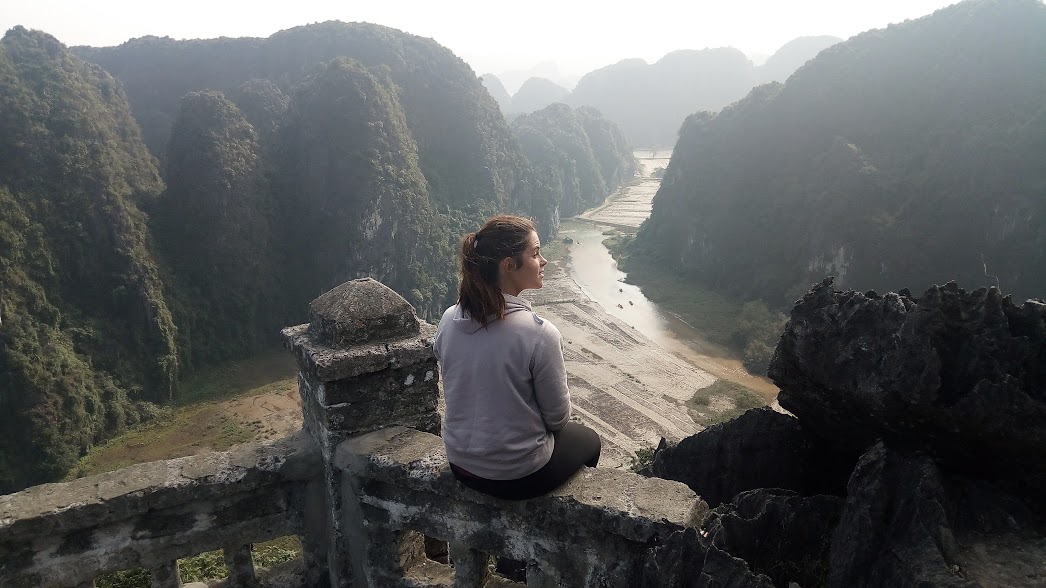 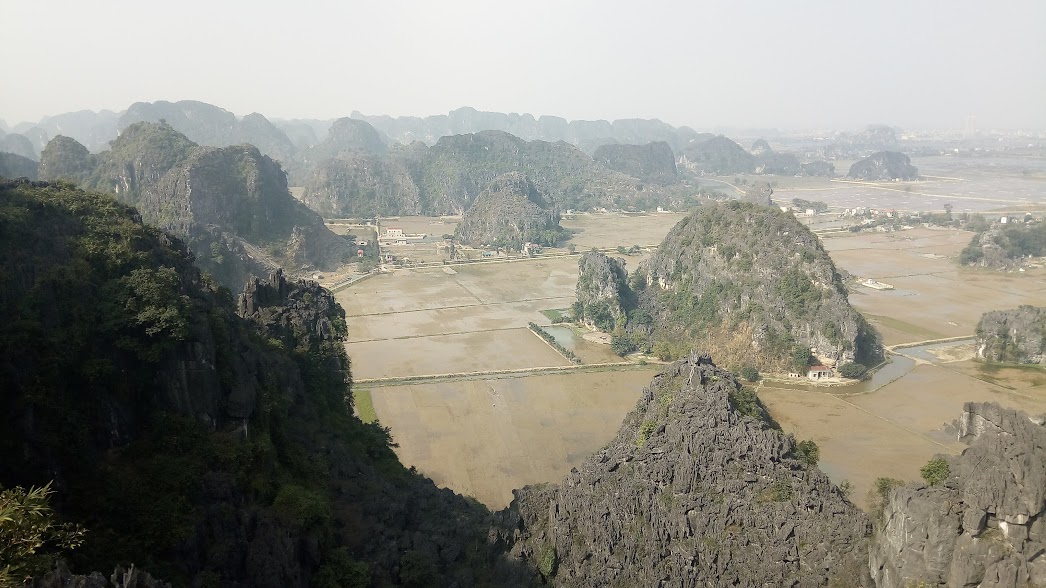 This was a dragon on top of the mountain, where they weren’t even steps to get too. We just climbed over some jagged rocks to get close to it. 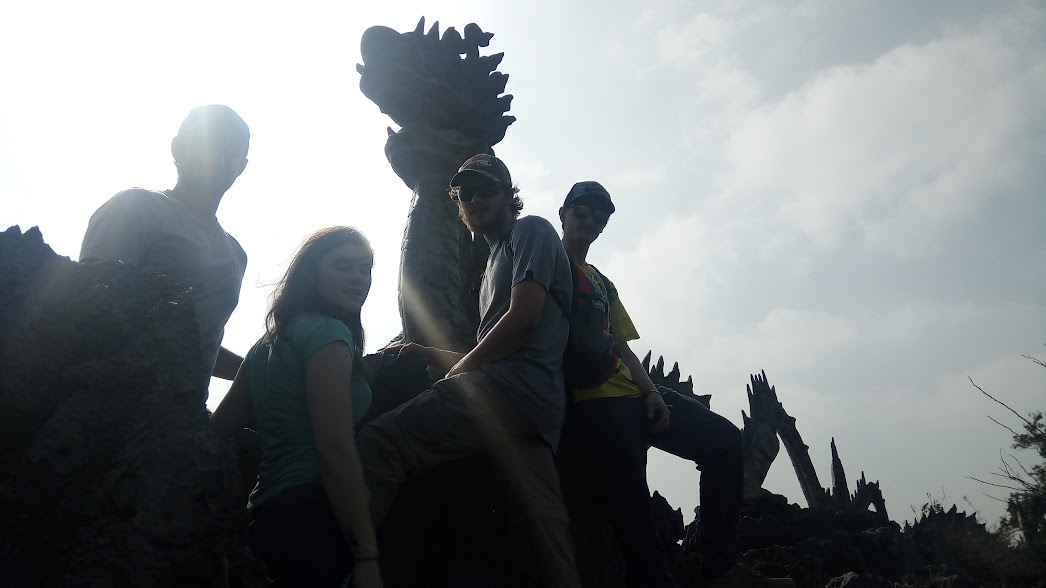 This is us sitting up top with our tour guide. 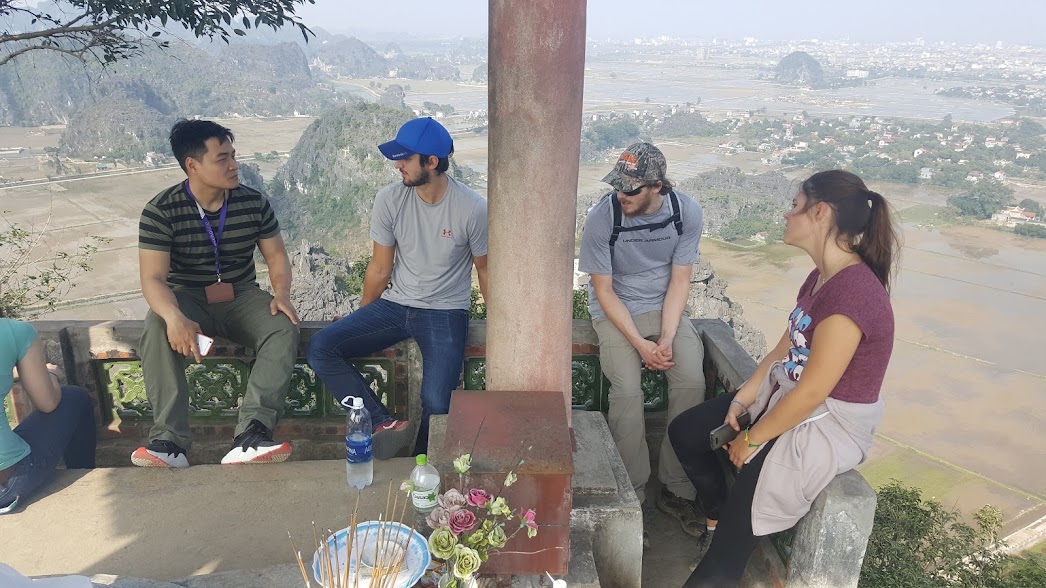 Then, later that night we decided to be adventurous and try a hot pot dish in our area. The restaurant people spoke very little english and they all thought we were so funny because they had to tell us every step to take with our food. Eventually they even asked to take pictures with us. I think we gave them a good laugh to be honest. 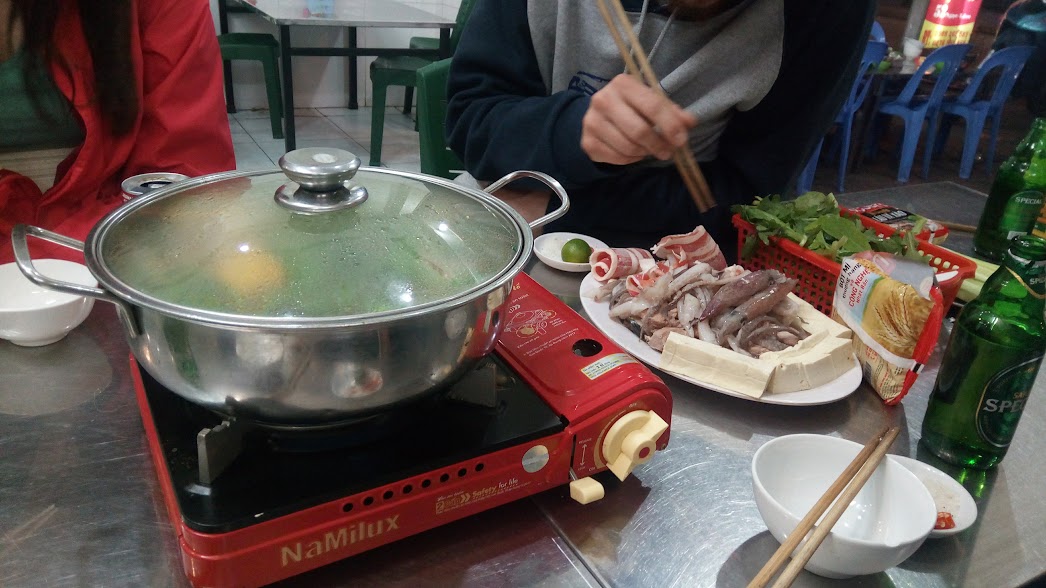 This is what we apparently ordered to put in our hot pot. A whole lot of sea food that wasn’t even close to good, and some other random meat. We all tried it, but when we left, there was definitely lots of food left in the hot pot…. 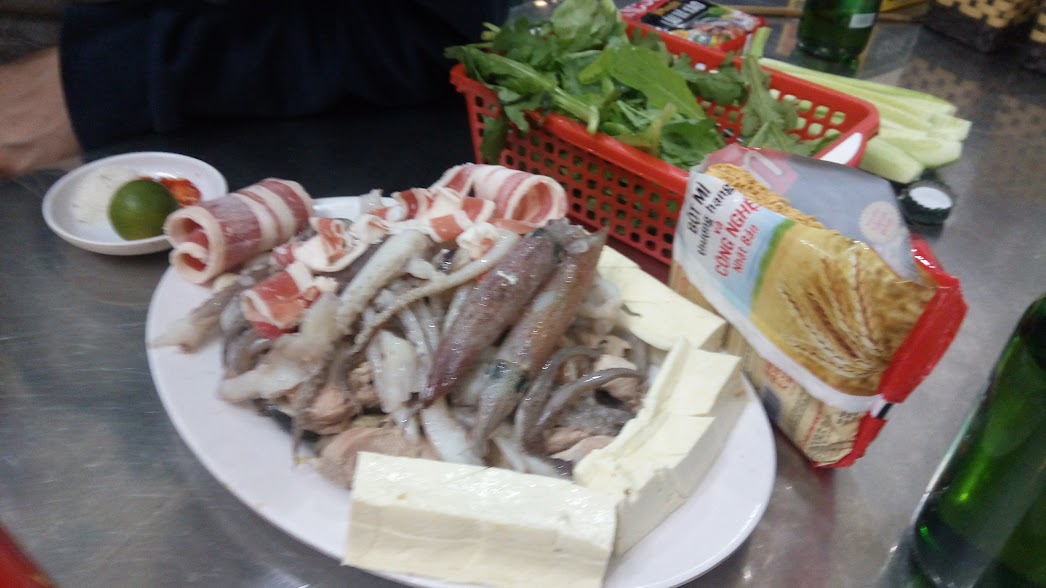 Alright, so if you haven’t heard of Halong Bay it is one of Vietnam’s biggest tourist destinations. It’s a massive bay of water with random limestone craigs sticking up out of it. The big thing around the area is to take a cruise ship out onto the bay and cruise around seeing the bay. So, that’s what we did. We had lunch on the boat as well, although unfortunately it was colder than it should have been. 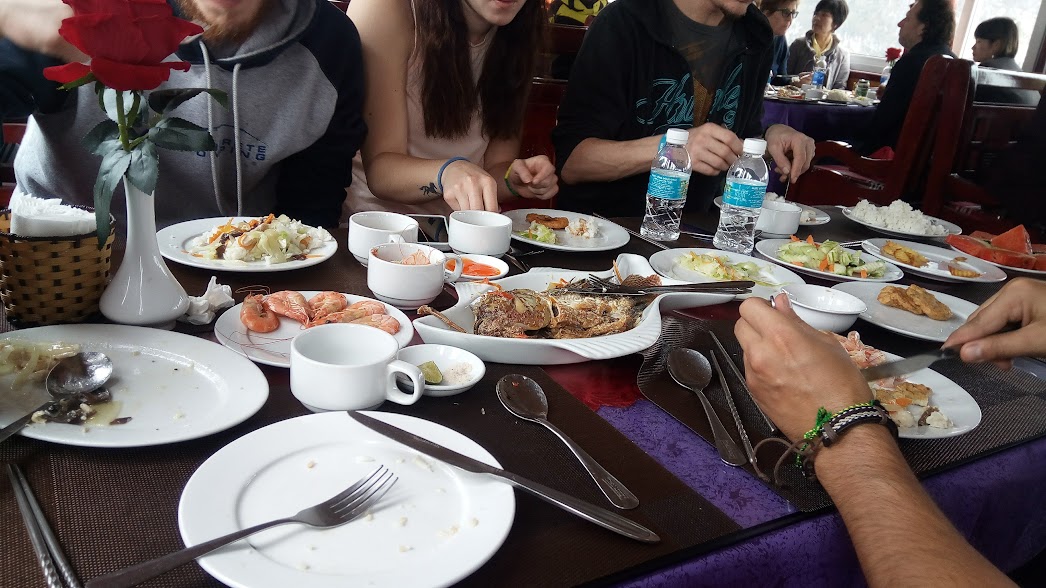 Then we started cruising around until we came to a little cove area where we stopped and had the option to either kayak around, or get paddled around in a boat. Will, Garrett, Mitch and Marci all chose to Kayak. As they were two person kayaks and we were a group of five I chose to just hop in a paddled boat to see the cove.

Then we got back on the boat to cruise around for a little bit more. We sat up top so that we could view the sights better. 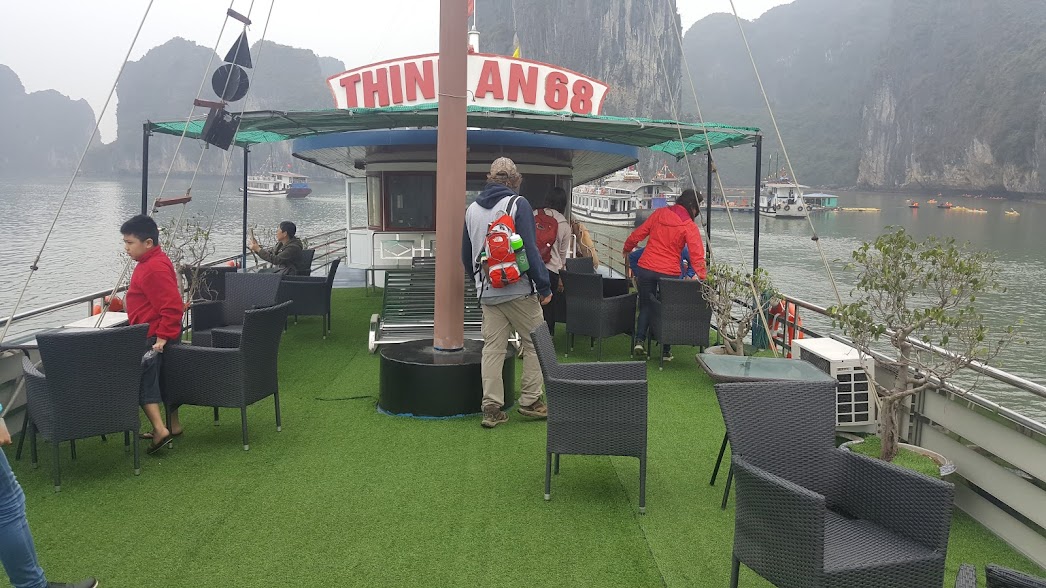 We even ordered a bottle of wine to share! (You can see the limestone in the background- unfortunately it wasn’t an overly clear day when we went). 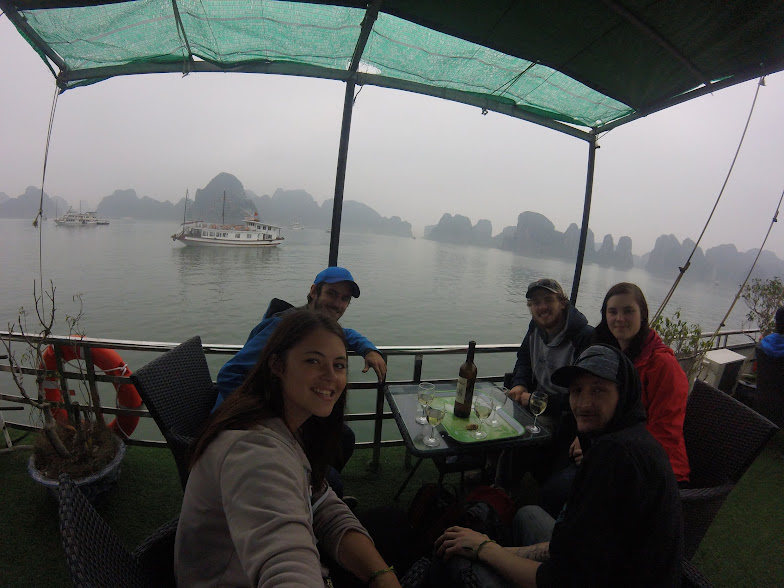 Finally, before we went back, they took us to a popular cave on the bay. Its the biggest one on the bay I believe and was discovered by a local fisherman. 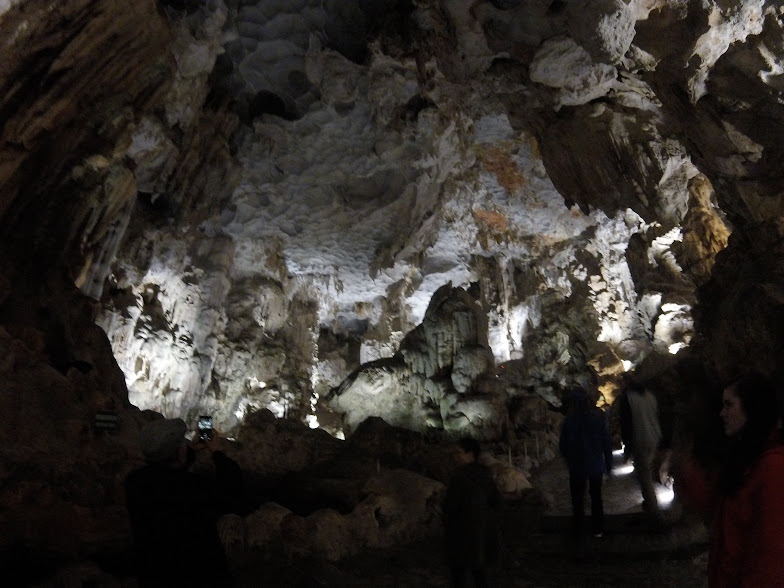 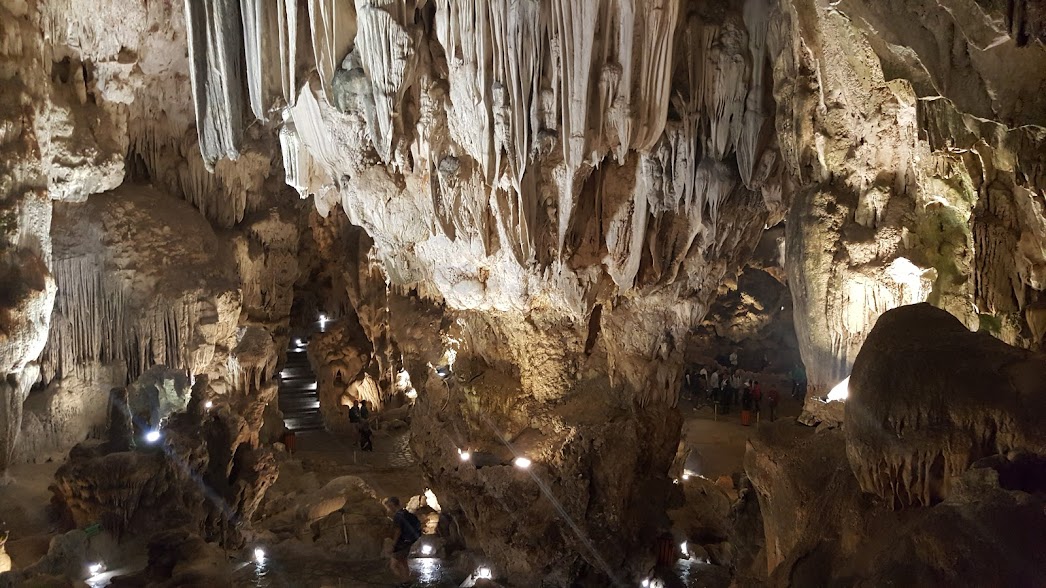 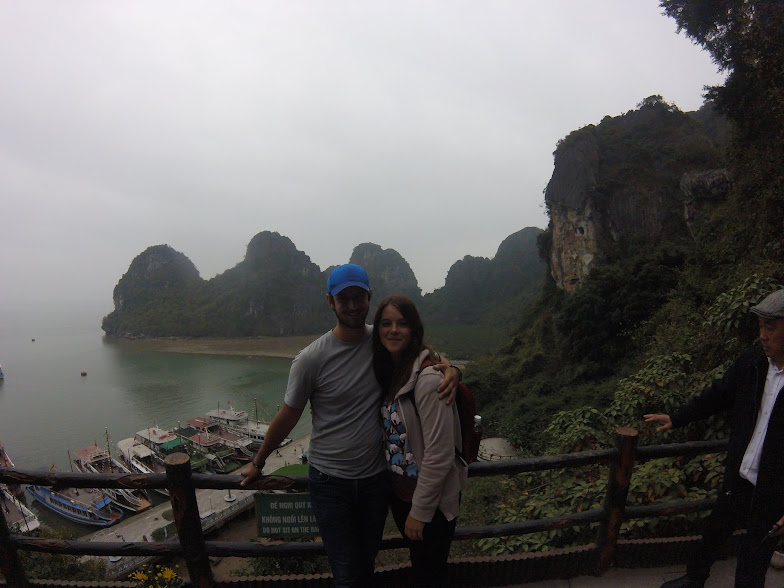 It was a great tour to end our last day in Vietnam with!

We actually had quite a treat. Our last night in Vietnam was the New Year’s eve of the Lunar New Year, also known as Tet or the Chinese New Year. This is Vietnam’s biggest holiday. They shut down for basically a week to spend time with family, in religious areas, etc. School is out and everything. And, on their new years eve, they have fireworks.

So, being that we were in the capital city, we gathered around the lake in their city centre with everyone else (pretty sure that was everyone left in the city that didn’t travel home to their villages) and sat on the banks of the lake waiting until 12:00am for the firework show to begin.

The wait was worth it. We had a solid 20 minutes of fireworks that were so loud you could feel the vibrating in your chest every time one went off. It was great to see all of the locals out and excited about their holiday, and all in all, a great way to end our Vietnam experience. 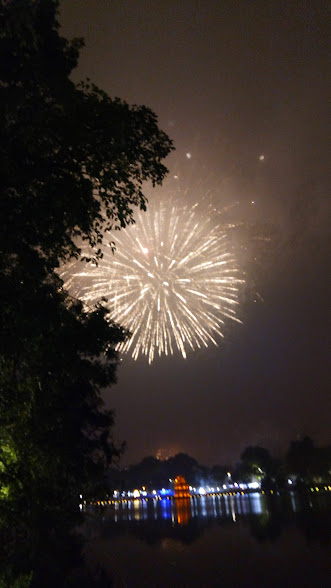 And that’s it for Vietnam! Will, Marci and Garrett headed back to Saskatoon and Mitch and I headed on to Bali, Indonesia!