We decided to head to the 160 million year old rainforest in Thailand, that is Khao Sok National Park. Apparently, the rainforest on the Thai-Malaysia border was never covered by the ice age so the rainforest is actually one of the oldest in the world.

After lots of internet searches we concluded that seeing the rainforest, and the lake inside of it, was best done by group tour. We booked a 4 day, 3 night tour online and headed off to Khao Sok town one day early to give us time to settle in. 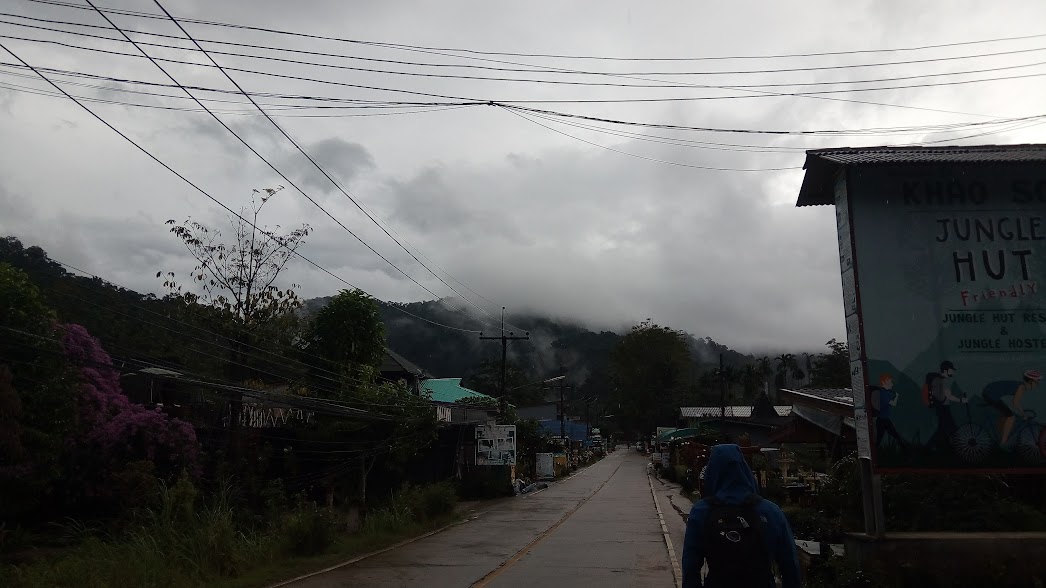 The first night we stayed in the town of Khao Sok. Basically a small town on the outskirts of the national park. We stayed in an elevated wood bungalow (which was only $12 CAD/night).

It was very cool but also a little scary. I personally hated the geckos/lizards that were everywhere. Usually no longer than a hand length but still. Mitch was better with them than I was. And yes, they were also in our little wood bungalow and there was no keeping them out. Also, when our door was shut, the wood was warped so there was a large gap between the two doors and the floor. So we tried our best to stuff it with towels but there was still a hole open to the outside when we slept.

The next day we headed to the resort that was running our group tour. Here we checked into a nicer wooden/lodge looking place in the rainforest partly overlooking a river. Again though, even though the doors closed it was easy for lizards to get in by climbing on the rafters from outside.

We had a nice relaxing canoe ride down a river to kick start our tour. They put two people per canoe (inflatable canoes) and had a guide sit at the back of the canoe and paddle us down the river.

We even saw some random naked local kids on one part of the river.

Halfway through, they stopped us at a cave area and made us coffee in a kettle over a fire as well as gave us cookies. Then we continued on our way down the river until the end where we got off the water and were driven back to the hotel.

Later that evening we also went on a night time ‘Night Safari’. It was a guided walk through a part of the national park at dark where we saw lizards, snakes, scorpions, spiders, glow worms, and other small insects. Our guide was really good, spoke good English and gave us lots of other information.

The next day we woke up to a large lizard (about 10 inches) on our wall. Inside. After we managed to pack up our stuff (while I kept an eye on the lizard) we went for breakfast and headed off with our group to stay on floating rafts on the Cheow Lan Lake. This is a large lake in the middle of the Khao Sok National Park (the rainforest).

The tour guide took us by boat on a picturesque route to the lake houses. 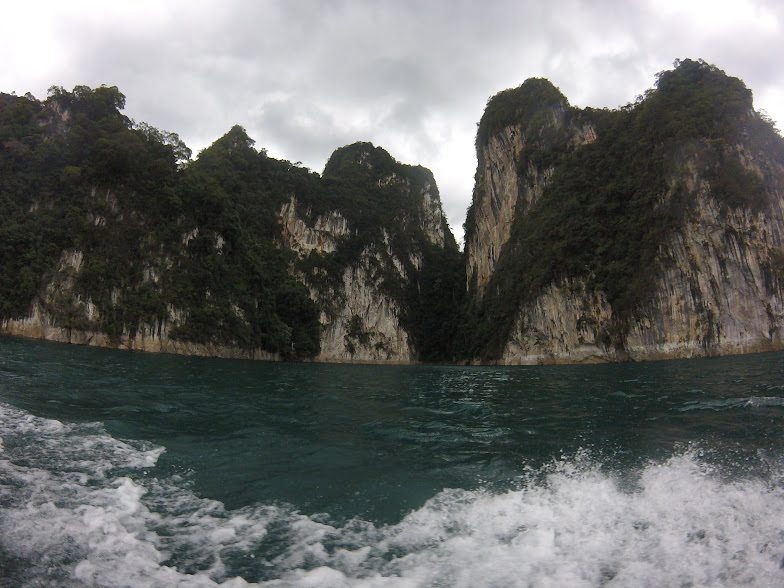 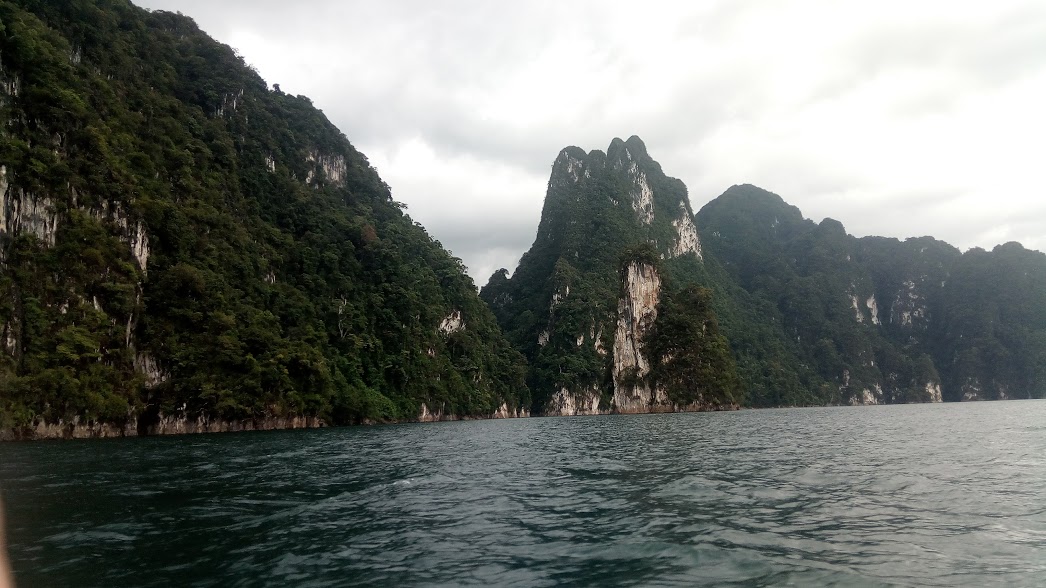 Once we got to the lake houses we checked in and then had some time for swimming and kayaking which we took advantage of. The cool part is that the lake is so high in calcium that there’s no mosquitoes on it and no leeches in it. 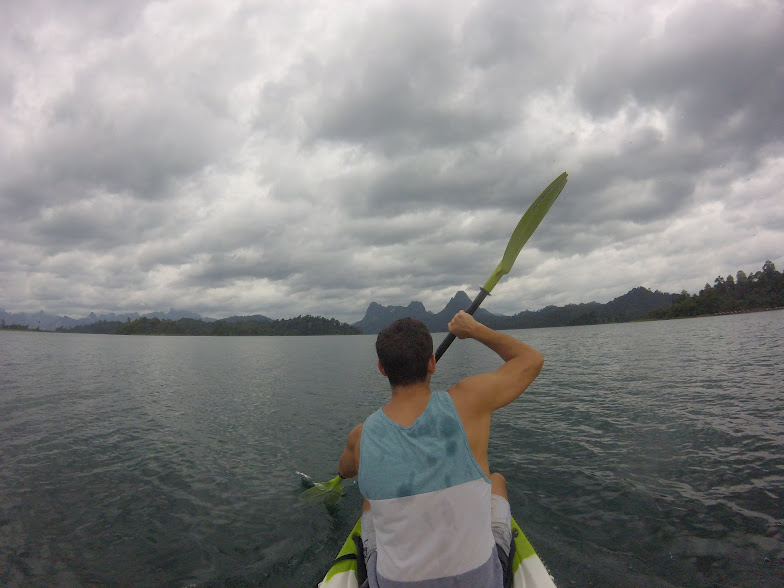 Then we hopped into the boat and drove to a specific location to do a Jungle hike.

The total walk took about 1 hour to get to the peak. Although we stopped alot along the way to see a few things. 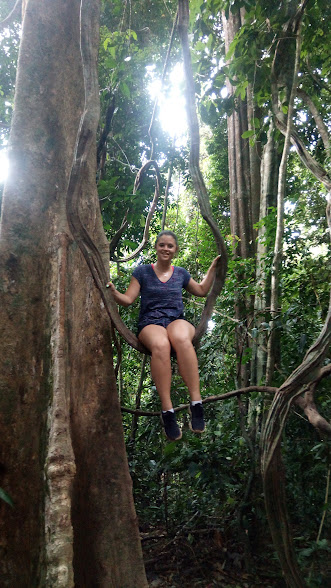 This cool natural swing being one of them.

And the view was definitely worth the climb! 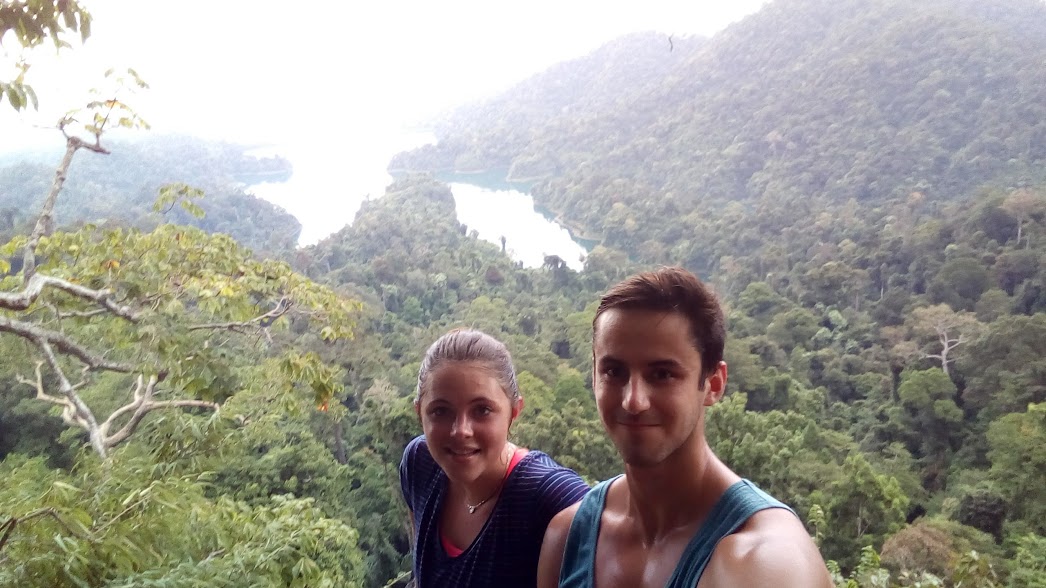 Finally, after climbing down we went back to the lake houses and ate supper. This fish was one of the supper items. And despite how weird it looks, it was actually pretty decent. It was like they just deep-fried the fish whole. But, you only ate the middle part anyways. 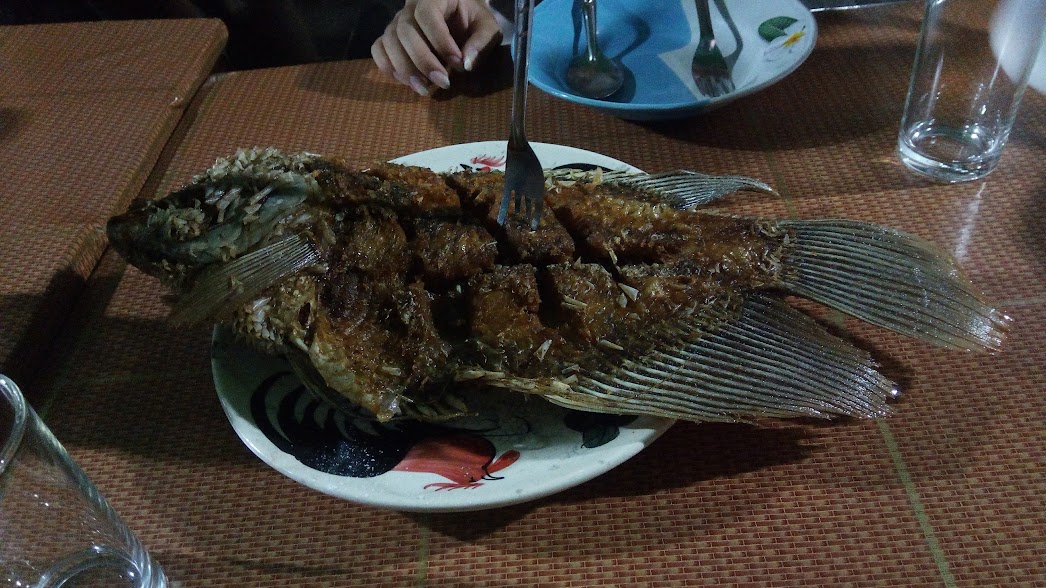 Then we stayed up late talking to a couple from Denmark that we had met the night before who were also on our tour with us. In fact our tour was mostly couples and all of them were really great. We were lucky to have such a good group for the multiple day tour!

Finally we went to bed in our small little raft houses. The sleep was… uncomfortable, as the beds were hard… but, it was also very cool when you woke up in the middle of the night and heard the sound the water underneath you in the pitch back.

And the view in the morning was pretty incredible. 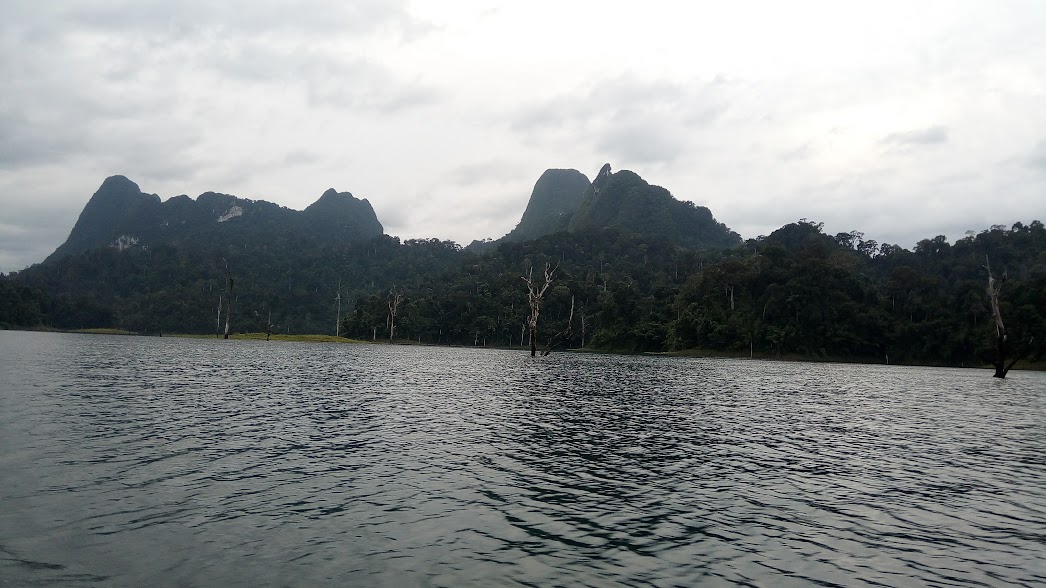 Finally, after feeding us breakfast they threw us in a boat again and we went off to a cave on the lake to explore. The cave had actually just been discovered in the last 15 years. They packed a lunch for us so that we could eat it while sitting on the rocks of the cave looking out on the water. 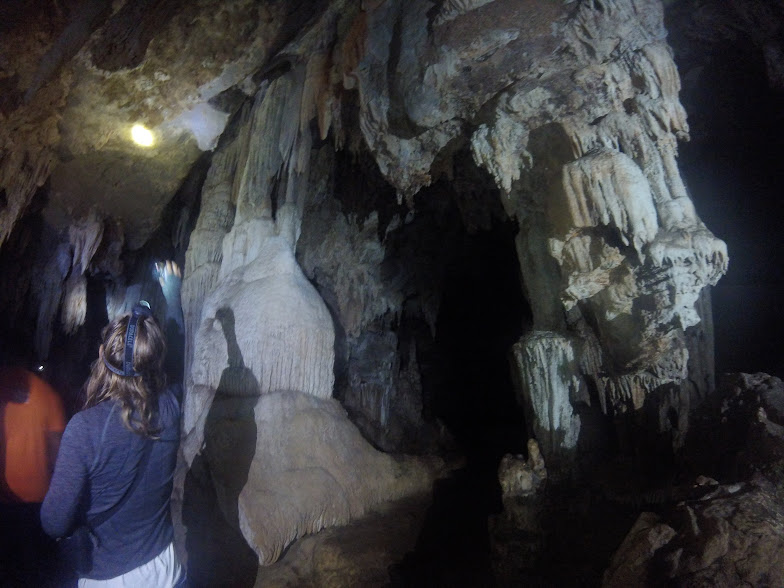 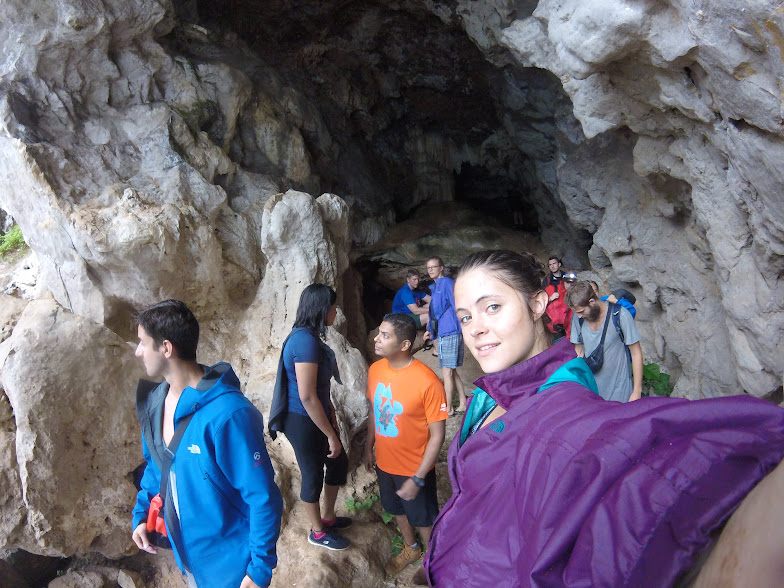 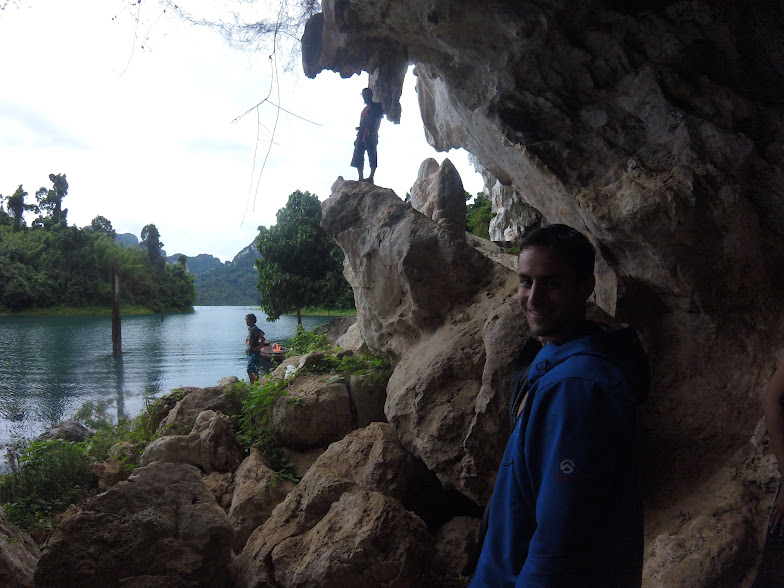 Finally, we had to leave the lake, so, they took us back to the hotel that we started the tour from. 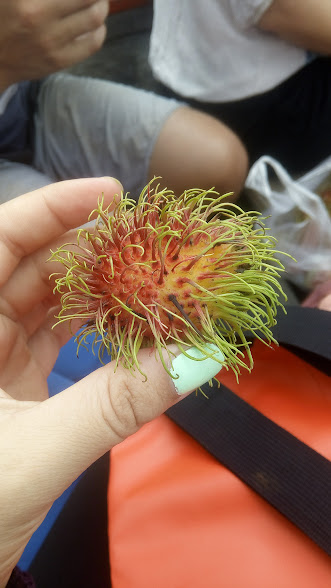 We stayed there again that night, but, in a different place from the first time, although yes, it was filled with lizards again. This night we learned to play Rummy from a German couple that was on our tour too. After figuring out their deck of cards (the Queen’s were labeled as ‘D’ not ‘Q’ and the Jack’s were labeled as ‘B’), Mitch killed everyone at the game, as he always seems to do.

Finally, the next day we took a dip in the hot springs as our last activity of the tour. These are the hottest hot springs I’ve ever been too. The water was being pulled from somewhere in the mountains it seemed and the pool that it went into first was so hot that we couldn’t put more than our feet into it. 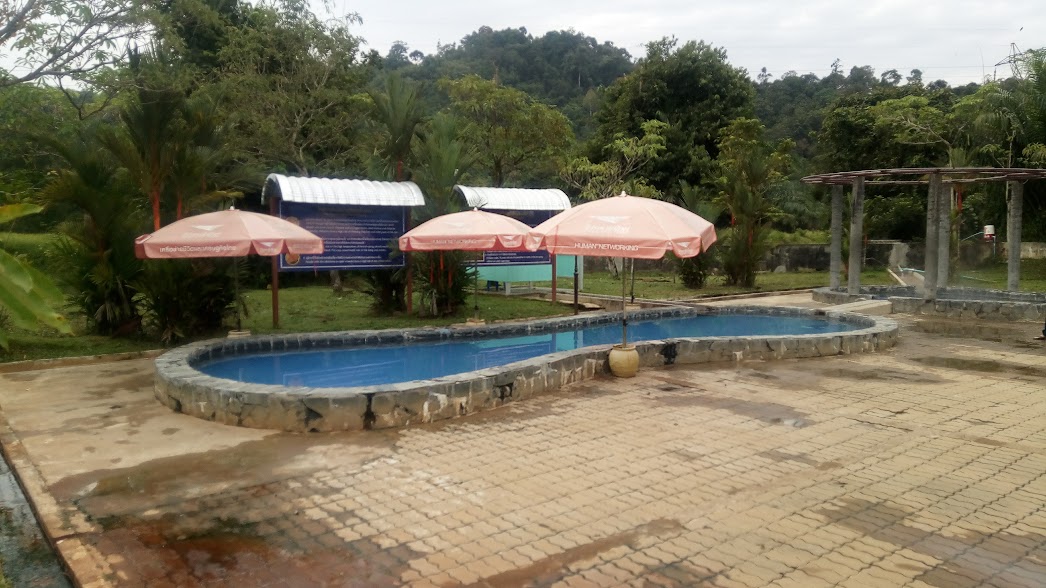 Then, from that pool, the water was funneled to three other pools. The other pools, especially the one farthest away, was actually bearable to sit in. 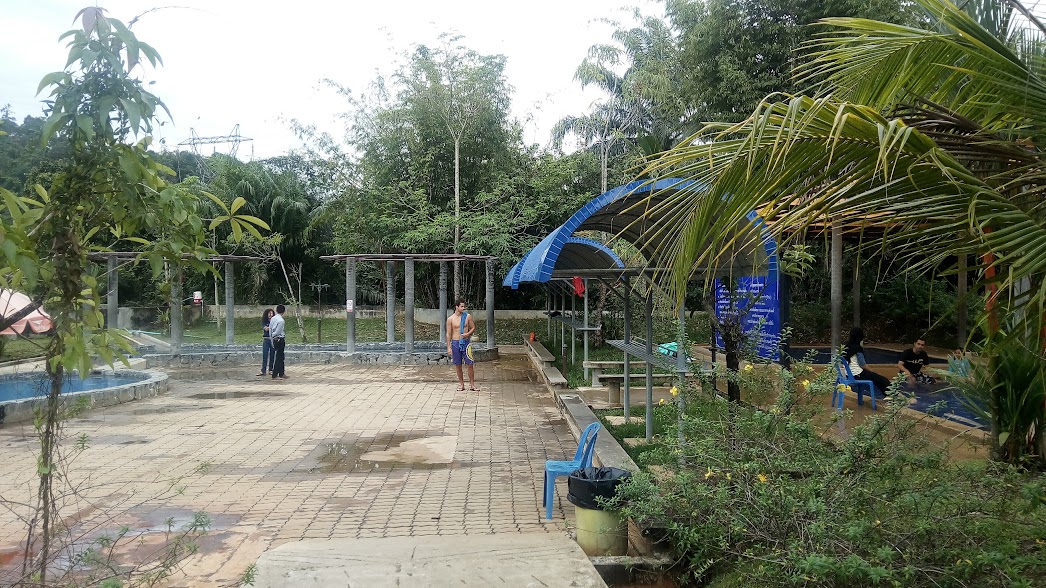 The hotsprings actually seemed to have alot of Thai locals which was really cool, and a little girl tried talking to us across the pool saying “My Name is Fuma” so I responded saying “My Name is Carly.” Although it seemed that phrase was the extent of her English language. That and the words ‘hot’ for the pool temperature. But she was cute and her an her sister were having fun trying to talk to us.

Cool side note though: these wild bison were grazing on the other side of the wall of the hot springs.

After 1 hour we went back to the hotel and packed our stuff to head out, ending our Khao Sok adventure.

1. For the total trip : 3 nights accomodation, 3 breakfasts, 2 lunches, 1 supper, all activities, transportion to and from we paid 5400 Baht / person ($212 CAD) – expensive for Thailand, but really the best way to experience Khao Sok.
2. ‎I (Carly) realized I hate lizards/geckos.
3. Mitch can’t believe how scared I am of them.
4. ‎The lizards/geckos may be harmless but when they frequent your roof (yes they just chill out walking around on the roof and walls inside places) they can fall on you or poop on you. We woke up the last morning with lots of poop around our room. Thankfully we always had a mosquito net above us while sleeping.
5. ‎They sell 95% Deet Mosquito Spray in Thailand. It actually is Mosquito and Leech spray as the high Deet percentage keeps land leeches from attaching to your legs and shoes when you hike.
6. ‎We saw monkeys swinging on the trees high above us on the way down from our jungle hike. Also on the last day we saw them across the river from our hotel hanging out in the trees.

Khao Sok was great and a lovely change from the beach views we’d been frequenting. We were definitely “beached” out, and this was a nice breath of fresh air.