I named the blog part 1 as we plan on going through Bangkok again in the future when we go to the north of Thailand.

The Trip to Bangkok!

Alright, first things first, we decided to save ourselves a little bit of money and book a night train from Khao Sok (Surratthani station) to Bangkok.

When you first get on the train, the seats just look like seats. 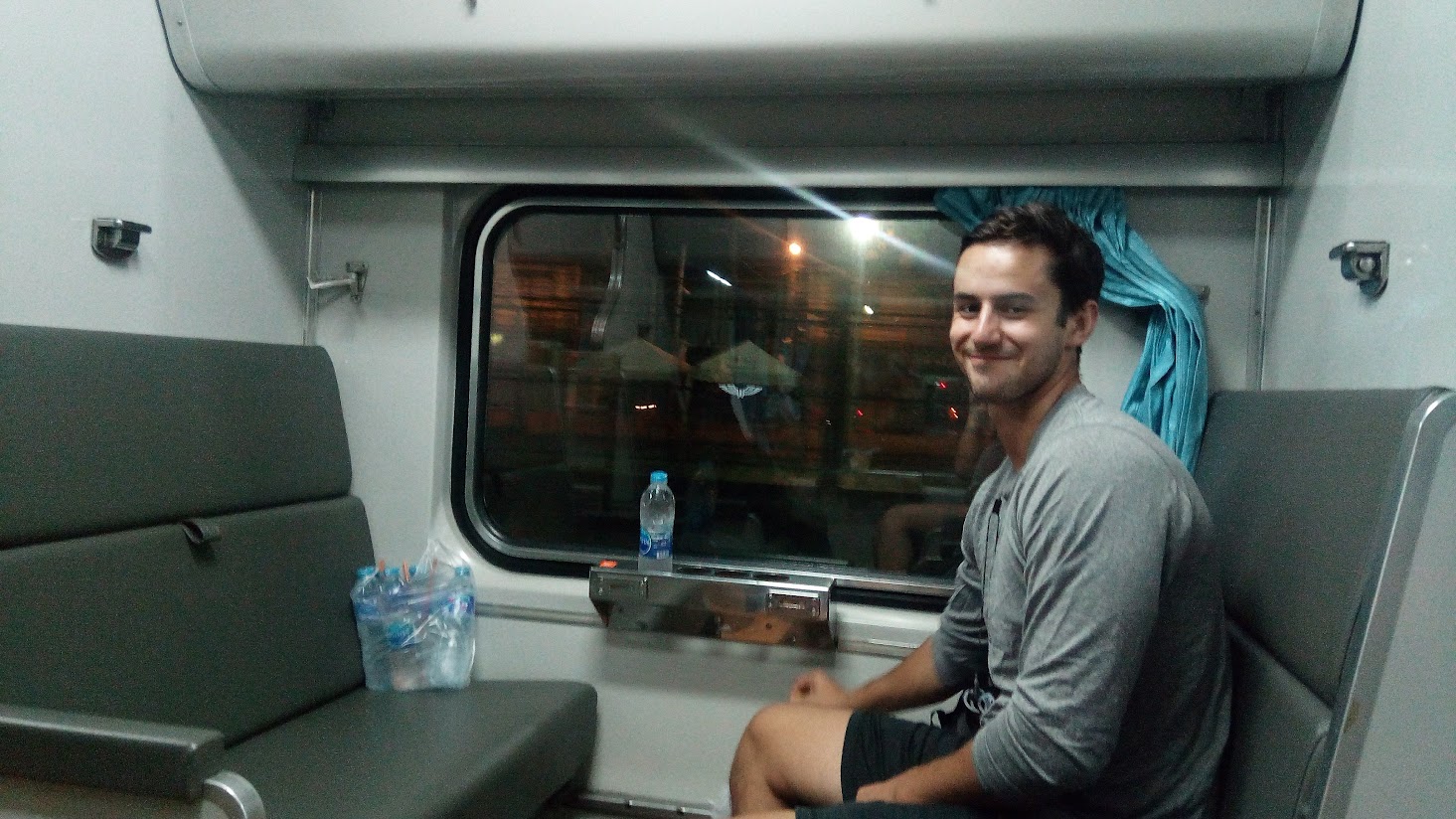 But if you look closely, above mitch’s head in the above photo is a bed that folds down, and the seats also fold into a bead.

As you can see, mitch is a little squished.

We really enjoyed the train ride because it was filled with locals. They all found it so funny when a local man was reaching up high for his bag and was going to have to stand on a seat just to reach it, when mitch stood up and just took it down for him and they realized that because of his height, Mitch didn’t have to stand on anything to reach it. They found it even funnier when Mitch (apparently a tall man on this train) had to climb up to the upper bunk and squish in. It was all good natured though, and they were really helpful in letting us know what was going on with train procedures.

After arriving in Bangkok at 7am on the overnight train, we found our hotel, unpacked and decided to go to a river tour/cruise we’d heard about. Theres a big river that runs through the middle of Bangkok and there are “hop-on” “hop off” tourist boats that go up and down the river to different pier points. For around $7 Canadian you can ride it as much as you want until 6:00pm, get off at any pier, and you get a little guide book too. 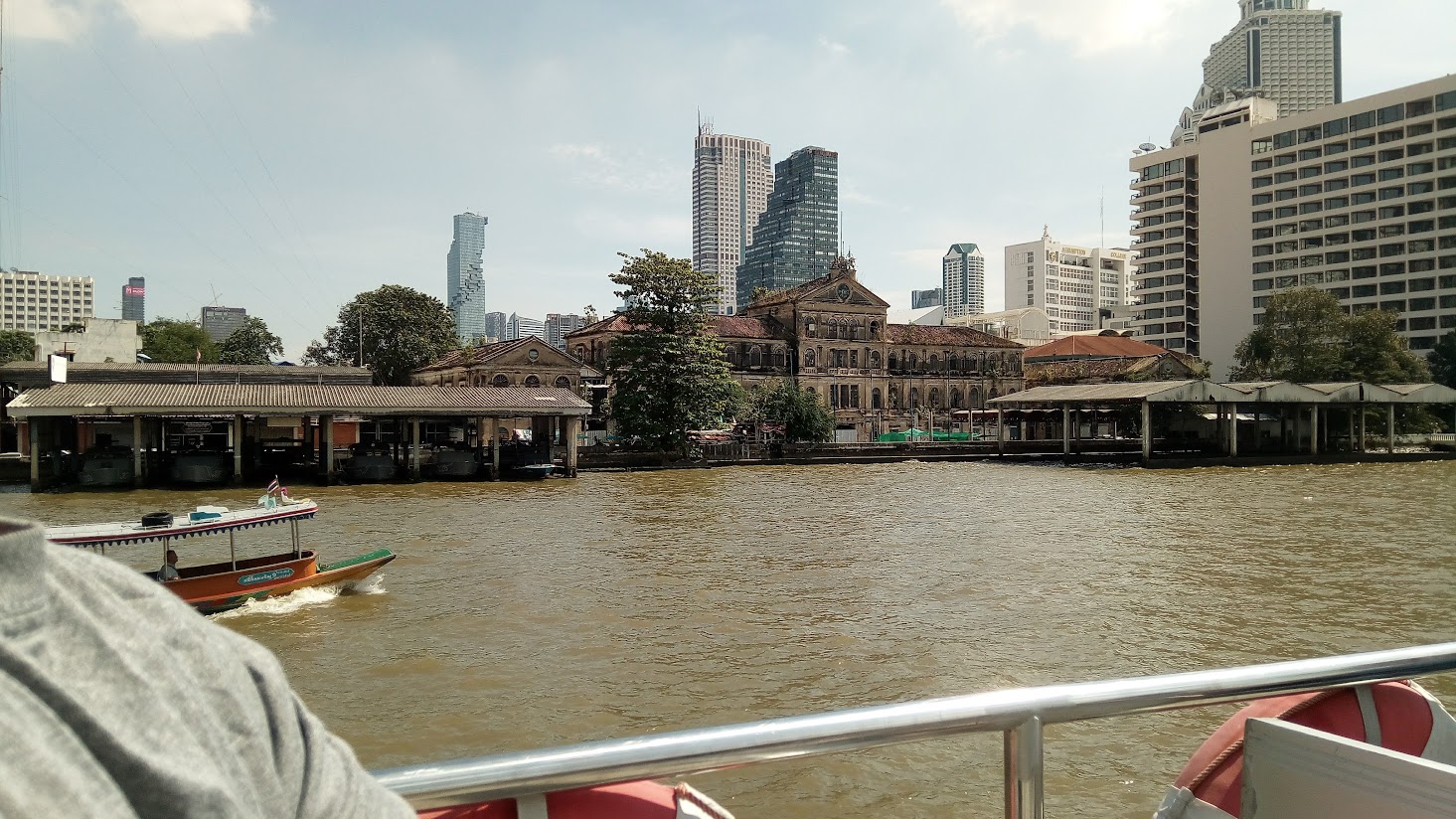 Our first stop was China town. It was crazy hectic, but it was super cool to see. We also took in a small temple in China town but we didn’t take any pictures of china town or the temple.

Then we went to the Wat Arun temple. This is the “Temple of Dawn.” We paid $2 CAD to get into the temple grounds and we wandered around just gazing up at this temple! 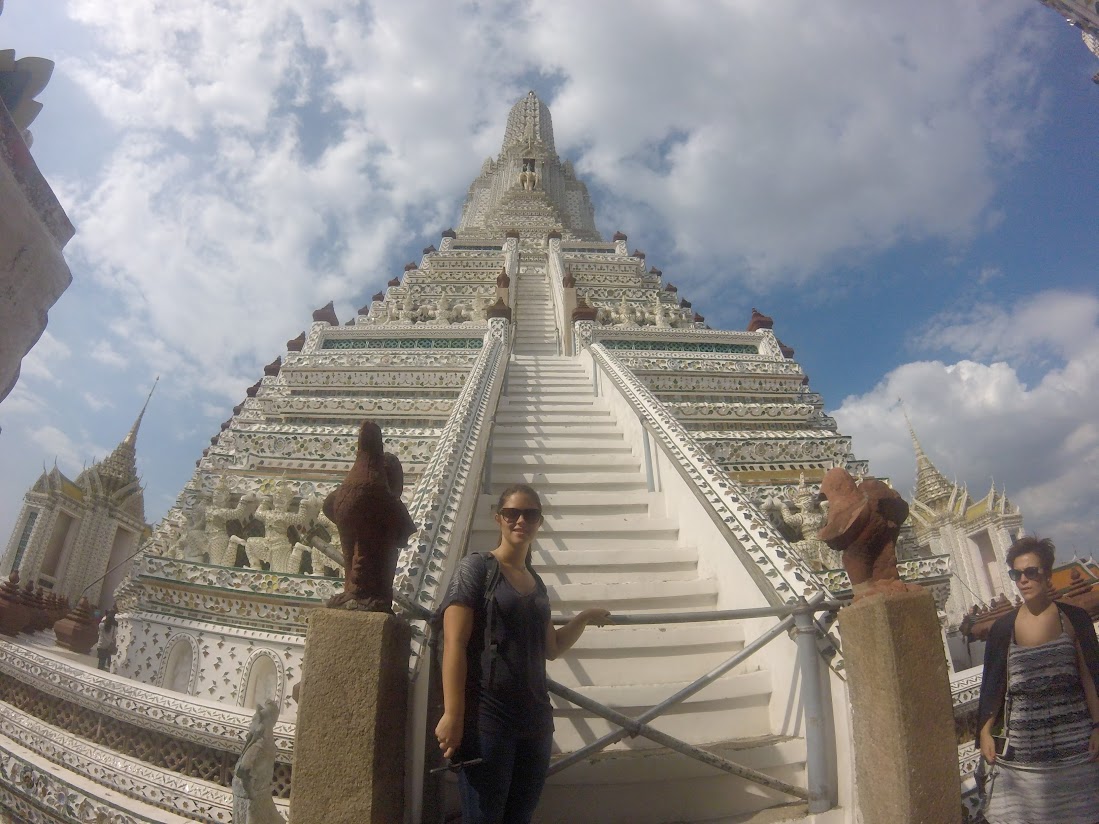 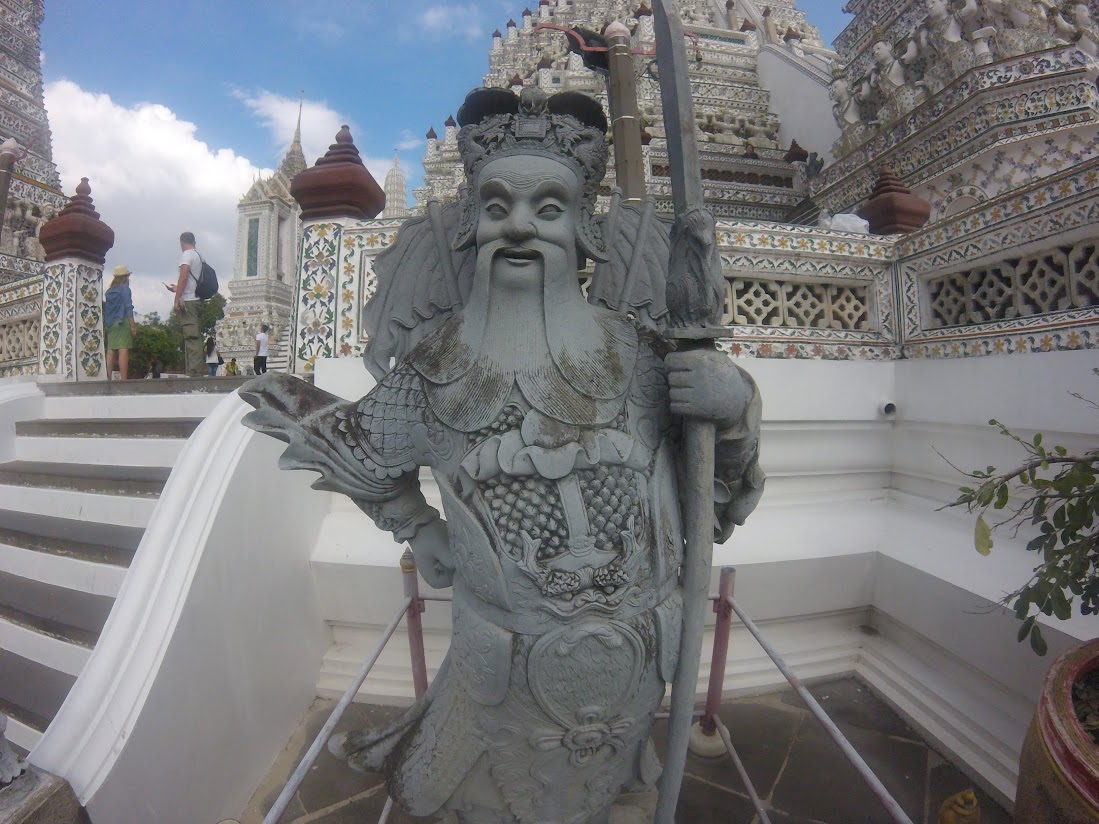 The cool part though was that we sat around until 3:00pm and watched the monks put on a music show for the visitors on drums! 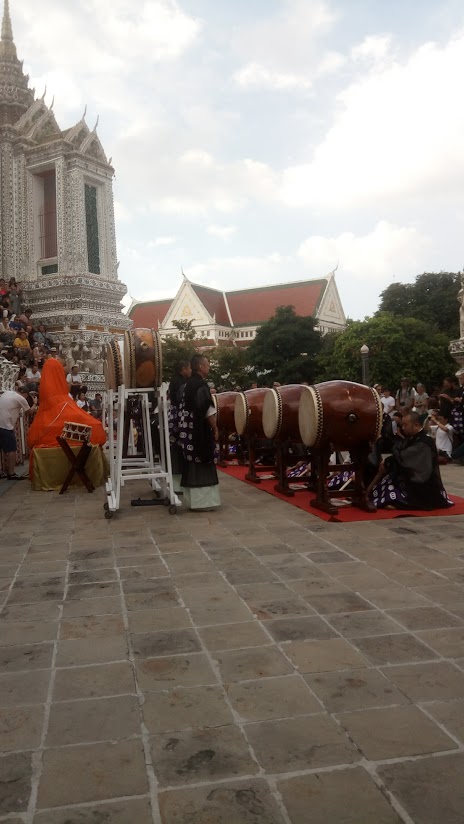 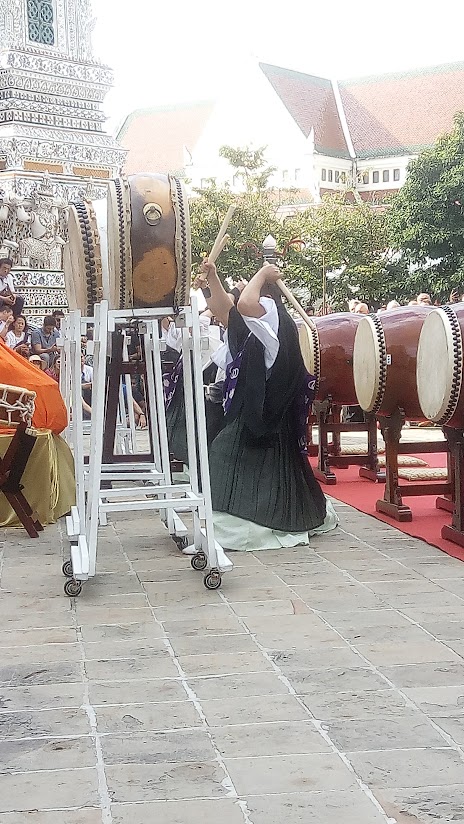 Then we also wandered around the grounds of a smaller temple right beside The Temple of Dawn.

Finally we moved on down the river to our last stop at Khao San Road. This is apparently the biggest backpacker road in Southeast Asia (although we didn’t feel that it was). Granted we only stayed out till about 8 o clock cause we were both wiped, but it didn’t seem as lively as Bangla Road in Patong. More focus here on selling things like shirts and hippie pants, whereas Bangla Road was just all clubs.

Then we got lost-ish. We had looked on a map how to get back from Khao San road to our hotel and knew that it was about 1 hour walk to the nearest skytrain station. We decided we’d just pay for a taxi instead. HOWEVER. No taxi seemed to want to take us to our place. Once we showed them the address, it was like it was too far and they didn’t want to drive that far out of the central area. After we were turned down 3 times, we decided to walk it. Then our maps app decided to take us on a roundabout route, and we missed streets that weren’t really streets, and anyways it led to us walking 1.5 hours from the main road to the nearest skytrain station at night in Bangkok, just to take that for 15 minutes home. While its a fun story to tell, we hope to never repeat it.

The next day we were wiped. We decided to just stay in and enjoy the infinity pool at our hotel and have a relaxing day. 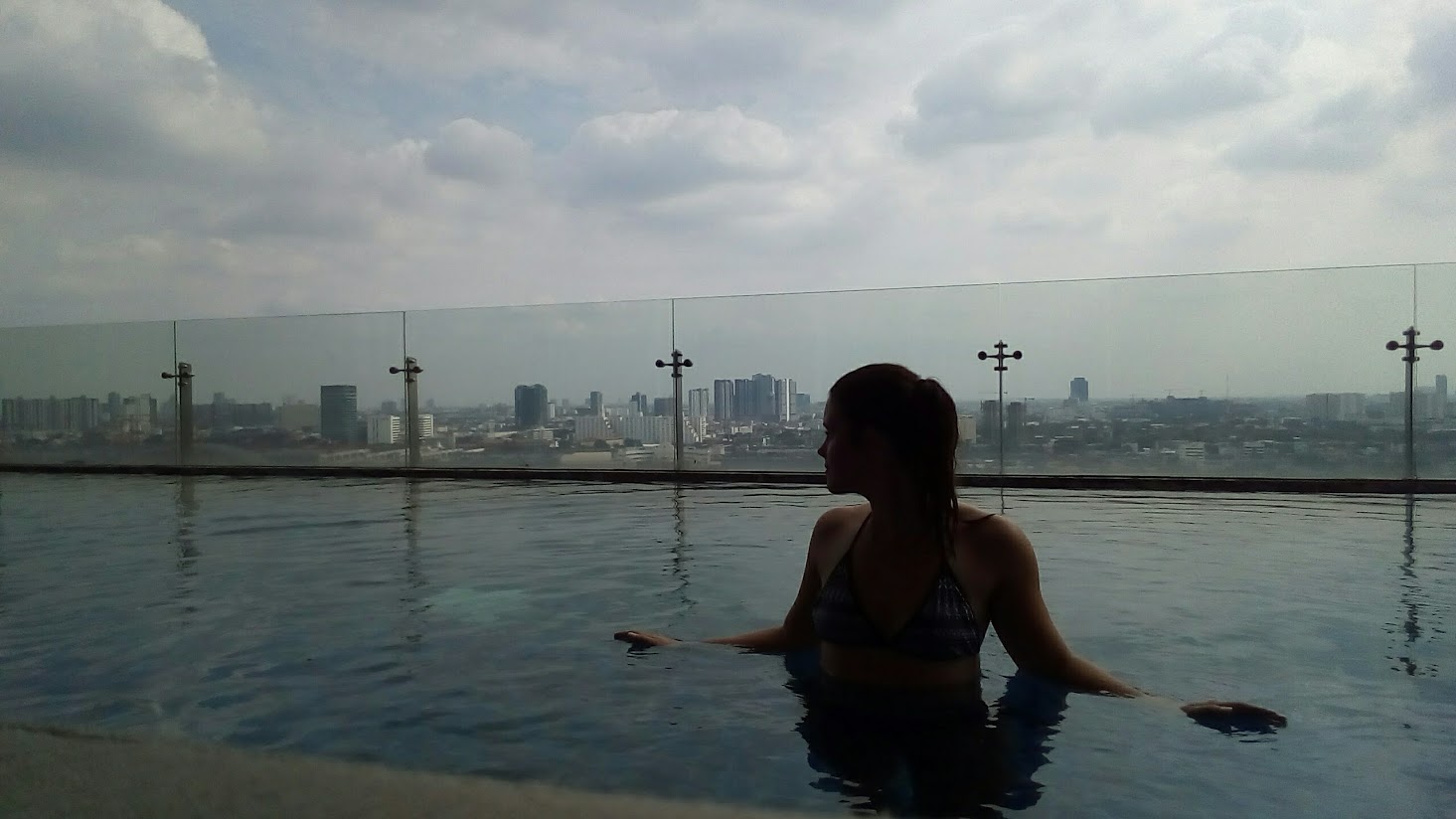 For the last day we decided to go to Bangkok’s main park area Lumpini Park and walk around. It was really nice and quiet, considering its in the middle of the city, and we walked around the park for a few hours. 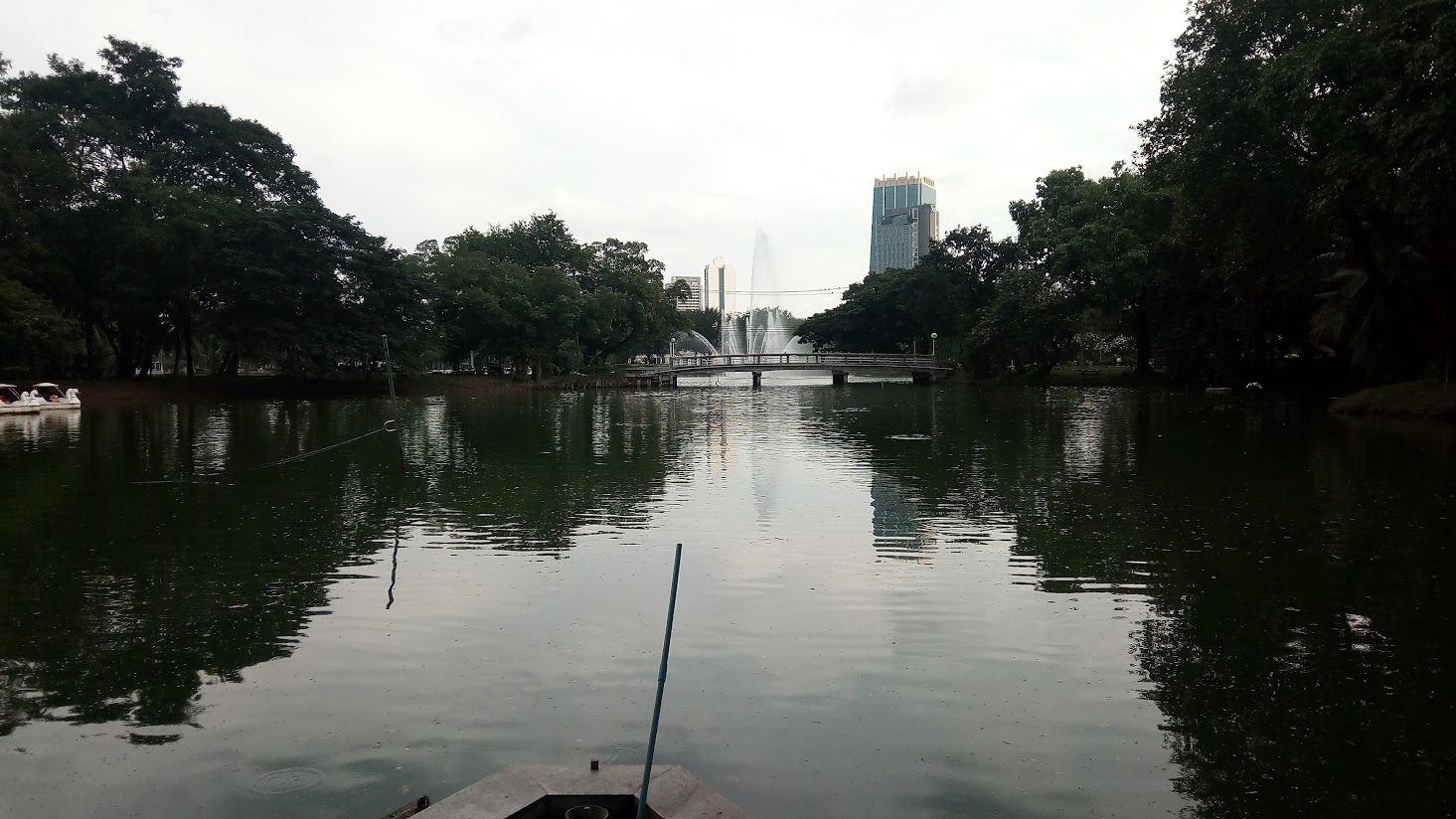 Lastly, we had been told about a weekend market in Bangkok, the Chatuchak weekend market, by our friends and so we thought we’d check it out, as it was supposed to be super busy and massive. However, our last night in Bangkok was a Friday night so the market was just starting up at around 8:00pm and there was not even half of the vendors there that would have been there on Saturday. It was still a good time though, we bought some clothing and even tried deep fried rice coconut balls. I thought they were okay, Mitch strongly disliked them.

Bangkok was not our favourite city by far. We’ve realized we aren’t big city people though. It is hard to get around if you don’t have a phone number to use Uber, and it is too busy and dirty for our liking. The river cruise was dissapointing other than the Temple of Dawn (Wat Arun) as the river was pretty much brown from all the pollution and the so called “awesome” sights from the river were very spread out and sparse, so majority of the sites were just “meh.”

We are choosing to come back to this city because there is a Muay Thai boxing stadium free on Sundays and we want to see that. Also it is a good transport point to the rest of Thailand and a good international airport to fly out of. We’ll just make sure to plan our next trip there for a Sunday and get in and out of the city fast.